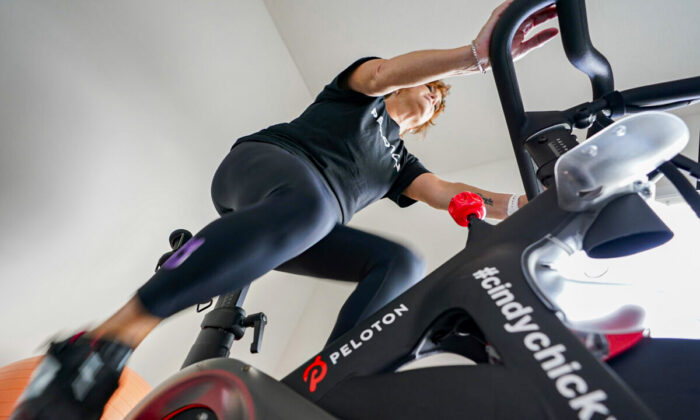 Cindy Cicchinelli uses her Peloton exercise machine in the workout room of her Pittsburgh townhouse on Aug. 8, 2021. (Keith Srakocic/AP Photo)
Businesses in COVID-19

Peloton Laying Off 2,800 Workers but Cushioning Blow With Complimentary Memberships

Peloton is set to lay off around 2,800 workers but is cushioning the blow with complimentary Peloton memberships for 12 months.

In announcing plans on Tuesday to cut about 2,800 jobs globally, including about 20 percent of its corporate positions, the New York-headquartered company noted that on-camera instructors and content “will not be impacted by the initiatives announced today.”

The fitness and technology company said it had struggled during the COVID-19 pandemic and with ongoing supply chain disruptions and delivery delays as well as its fair share of “challenges/pivots/the unexpected.”

“I recently shared that we have been in the process of re-evaluating our costs across the entire organization to ensure we are appropriately structured for the post-COVID landscape,” Peloton Co-founder and Executive Chair John Foley said in a note to employees.

“After careful review, we’ll be driving strategic initiatives across our global team that will help us focus on areas that are in need of adjustment, including implementing a comprehensive restructuring program.”

“As part of this program, we’ve made the difficult decision to reduce the size of the Peloton team by approximately 2,800 positions globally. We are making changes at every level of the organization, including within our leadership team,” Foley said.

As part of the severance package, the company said it would offer its North American employees cash compensation (based on tenure and job title); health care (although it did not specify for what period of time); and a complimentary Peloton membership for an additional 12 months to soften the blow.

The company is also undergoing a change in leadership, with Foley stepping down from the role to become executive chairman. He will be replaced by Barry McCarthy, a former executive at companies like Spotify and Netflix.

Peloton’s President William Lynch, who has served in the role since 2017, is stepping down effective immediately but will remain on the board as a non-executive director.

Foley’s wife, Jill, who had been vice president of apparel, is also stepping down from her role.

Peloton also noted that it’s “winding down the development” of its Peloton Output Park manufacturing plan Ohio, which the company announced in May 2021. It estimates this will help the company save $60 million.

In addition, Peloton will “optimize its logistics network by reducing its owned and operated warehousing and delivery footprint, while scaling third-party relationships,” the company said.

The 2,800 layoffs will occur across nearly all of the company’s operations with corporate positions being reduced by approximately 20 percent.

“With regard to operations in the field, the company is reducing its owned and operated warehouses and delivery teams and expanding its commercial agreements with third-party logistics providers,” Peloton said.

Once the above actions have been implemented, Peloton said it expects to achieve at least $800 million of annual run-rate cost savings and reduce its planned capital expenditures in 2022 by approximately $150 million.

At the peak of the COVID-19 pandemic, Peloton’s sales skyrocketed as more people turned to its high-tech home fitness bike, treadmill, or workout apps amid gym closures.

But as countries across the globe move to ease lockdown restrictions or do away with them completely, Peloton’s profits aren’t quite as fighting fit.

Since January 2021, the company’s stock has sunk by 80 percent, with the company losing $439 million in its most recent quarter.

Foley on Tuesday acknowledged these challenges in his note to employees.

“We navigated COVID-19 together, did our best to meet unprecedented demand, increased the size of our team, and grew our product portfolio,” he said. “However, as our post-COVID demand picture looks different than anticipated, these investments no longer align with how we intend to operate our business going forward.”