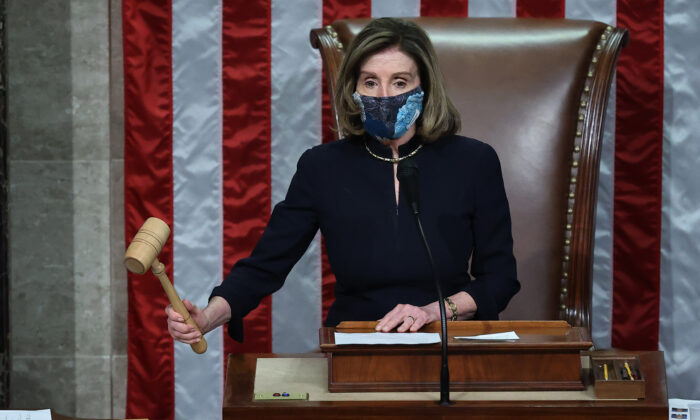 Speaker of the House Nancy Pelosi of the U.S. Capitol in Washington on Jan. 13, 2021. (Chip Somodevilla/Getty Images)
Congress

Speaker of the House Nancy Pelosi (D-Calif.) is ignoring a demand from the top Republican on the House Administration Committee for documents and messages with important details of key decisions she made before and during the Jan. 6, 2021, incursion at the U.S. Capitol.

“The events of January 6, 2021, exposed serious security vulnerabilities at the Capitol Complex. Unfortunately, over the past 12 months, House Democrats have been more interested in exploiting the events of January 6th for political purposes than in conducting basic oversight of the security vulnerabilities exposed that day,” Rep. Rodney Davis (R-Ill.) told Pelosi in a Jan. 3 letter, a copy of which was obtained by The Epoch Times. Davis is the ranking minority member of the administration panel.

“Republicans have sought to conduct this oversight ourselves, including understanding House officials’ preparedness for and response to the violence on January 6th. However, these House officials, who are appointed by and answer only to you, have blocked our access to key records necessary for this oversight,” Davis told Pelosi.

“Accordingly, we write to demand that you instruct all House officers to immediately cease obstructing our oversight of the Capitol complex’s security vulnerabilities,” he said. Davis first requested the documents in February 2021, a few weeks after the incident that saw several hundred protestors penetrate the Capitol, including the Senate and House chambers.

The documents being sought, Davis told Pelosi, are “necessary for our oversight, especially considering key assertions made by former [United States Capitol Police] (USCP) Chief Steven Sund that he communicated with then-House Sergeant-at-Arms Paul Irving about preparations for January 6th.”

“In a letter to you, Chief Sund wrote that he approached Mr. Irving in advance of January 6th to ‘request the assistance of the National Guard.’ Chief Sund recounted how Mr. Irving ‘stated that he was concerned about the “optics” of National Guard troops being present at the Capitol.'”

Davis said that Sund “detailed other briefings and communications with senior officials in advance of and during the violence, including a conversation with Mr. Irving during the violence about authorizing the National Guard, in which Mr. Irving stated that ‘he needed to run it up the chain of command.’ Chief Sund’s assertions highlight the importance of understanding what direction, if any, Mr. Irving received with respect to the preparations and response to the January 6th violence.”

Irving strenuously denied Sund’s account of their conversations while testifying before a Senate committee last year. When Irving was asked by two senators for documentation of his denial, his attorneys provided only summaries of the requested materials, not the documents themselves.

Davis told reporters during a conference call earlier this week that “the House sergeant at arms, at the direction of the Speaker, has refused to provide us their communications surrounding January 6. What everybody should be asking is, ‘What is Speaker Pelosi hiding?'”

When asked if the Speaker had responded to Davis, Henry Connelly, Pelosi’s communications director, referred The Epoch Times to a statement issued by House Administration Committee Chairman Zoe Lofgren (D-Calif.).

“The Ranking Member’s letter is pure revisionist fiction. The Chief Administrative Officer and House Sergeant at Arms have already notified Ranking Member Davis they are complying with preservation requests and will fully cooperate with various law enforcement investigations and bonafide congressional inquiries,” Lofgren said in the statement.

Lofgren was referring to a Feb. 1, 2021, letter to Davis from House Chief Administrative Officer Catherine Szpindor and Acting House Sergeant at Arms Timothy Blodgett in which they noted that they “are taking appropriate steps within our authority, as requested by data owners, or as requested by law enforcement to preserve information and data related to the attack on the Capitol. … We also anticipate working with any House and/or joint committees with appropriate jurisdiction, yet-to-be-enacted commissions that Congress may choose to establish and empower to investigate the events, and other entities that may become involved going forward.”

The California Democrat in her statement further described the Davis letter as “yet another attempt by the minority party to distract and deflect. House Democrats will continue to examine the facts, circumstances, and causes of the January 6th attack, identify lessons learned, and recommend laws, policies, procedures, rules, or regulations necessary to protect our republic in the future.”

During the same conference call with reporters earlier this week in which Davis commented, Rep. Jim Jordan (R-Ohio), the ranking GOP member of the House Judiciary Committee, said, “You have conflicting testimony. The police chief and the CHPS have turned over the documents that have been requested, but the Sergeant at Arms hasn’t.

House Republican Study Committee Chairman Rep. Jim Banks (R-Ind.), who also participated in the conference call, said House Republicans “have conducted numerous interviews during the last few months with rank and file Capitol Police officers and other people who were willing to talk to us, and we keep hearing a repeated theme … that they were not prepared for what happened on January 6.”

“The intelligence was never shared with them that something might happen on that day, even though the intelligence was there for weeks prior to January 6, they weren’t equipped for what would happen that day, they had expired shields and faulty equipment, and many of the rioters had more sophisticated equipment than our own officers did, and they weren’t trained for what would happen on January 6,” Banks said.

Jordan and Banks were chosen by House Minority Leader Kevin McCarthy (R-Calif.) to serve on the Select Committee to Investigate the January 6 Attack on the U.S. Capitol that was established in the wake of the incident. But in an unprecedented move, Pelosi rejected both men for unspecified reasons.