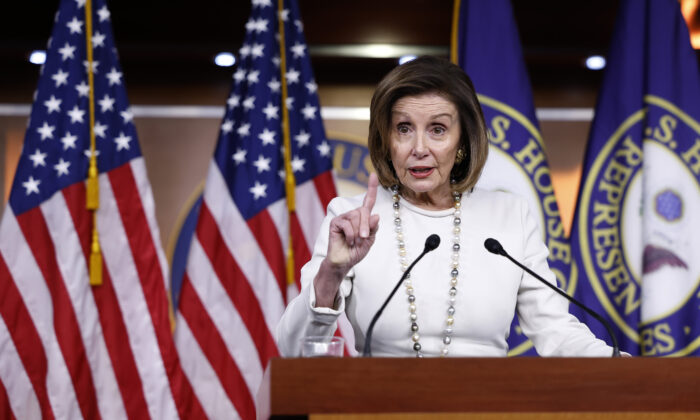 The decision would be up to Ways and Means Committee Chairman Richard Neal (D-Mass.) and members of the panel, Pelosi said.

“That’s a judgment they’re going to have to make,” she told reporters during a briefing in Washington.

The judgment would be in keeping with the purpose of acquiring the returns, which Neal has said is examining the way the IRS audits presidents and considering legislative reform to the program, Pelosi added.

Pelosi’s comments came hours after the Biden administration said it transmitted six years of Trump’s federal returns to the committee, which had been locked in litigation for years over the matter. The U.S. Supreme Court declined to intervene in a recent order, clearing the way for the Department of Treasury to transmit the documents.

Neal didn’t respond to a request for comment by press time and a Ways and Means Committee spokesperson declined to comment after the returns were transmitted.

Trump’s opposition was predicated in part on how top Democrats, including Neal and Pelosi, have said or suggested they’d release the returns if they were ever able to obtain them.

“Committee Democrats remain steadfast in our pursuit to have his individual tax returns disclosed to the public,” Neal said on the House floor in 2017.

Courts ruled that because Neal had expressed a legislative intent—using the returns as part of a process of considering whether legislation was needed to overhaul the way IRS audits presidents—his effort was legal, even though judges acknowledged that Democrats might release the documents.

“The Chairman has identified a legitimate legislative purpose that it requires information to accomplish. At this stage, it is not our place to delve deeper than this. The mere fact that individual members of Congress may have political motivations as well as legislative ones is of no moment. Indeed, it is likely rare that an individual member of Congress would work for a legislative purpose without considering the political implications,” U.S. Circuit Judge David Sentelle, a Reagan appointee, said in one of the rulings.

“The statements of individual Committee members and members who are not part of the Committee provided by the Trump Parties do not change this. The courts do not probe the motives of individual legislators. These motives are explicitly protected by the Speech or Debate Clause.”

The Supreme Court declined to hear arguments against that ruling, which ordered the IRS to transmit the documents to the House, and on Nov. 22 lifted a temporary stay of the order.

Trump criticized the ruling, saying that “it is unprecedented to be handing over Tax Returns, & it creates terrible precedent for future Presidents.”

“The Supreme Court has no idea what their inaction unleashes,” Brady said. “By effectively granting the majority party in either chamber of Congress nearly unlimited power to target and make public the tax returns of political enemies—political figures, private citizens, or even justices of the Supreme Court themselves—they are opening a dangerous new political battleground where no citizen is safe.”

Pelosi said the situation calls for legislation that would mandate that certain presidential candidates make their returns public.

“We need to possibly have legislation requiring candidates for president to reach a certain threshold, that the public has a right to see their tax returns,” she said.

“I think the public has a right to know. That’s why we should pass legislation requiring candidates to do that. That’s why every other candidate has, except you know who, and who shall remain nameless here.”

Democrats control the House, the Senate, and the White House, although Republicans are poised to take control of the House in January 2023 when the new Congress convenes.

H.R. 273, introduced by Reps. William Pascrell (D-N.J.) and Anna Eshoo (D-Calif.), would require presidents and candidates to disclose their 10 most recent tax returns. The bill was included in H.R. 1, which the House passed but which died in the Senate.