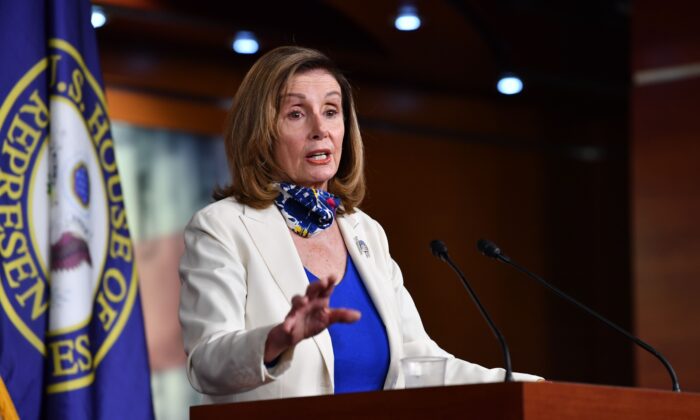 House Speaker Nancy Pelosi (D-Calif.) was asked Thursday about reports that tied Democratic presidential candidate Joe Biden to an alleged influence-peddling scheme involving his son, saying she believes it’s not worth the time.

“We’re talking about the coronavirus,” she said. “I don’t have all day for questions.”

Biden’s campaign has denied that he ever met with a Ukrainian gas company official, which was allegedly revealed in a trove of emails that purportedly were found on a laptop hard drive belonging to his son, Hunter, who sat on the company’s board while his father was the vice president. Those allegations surfaced in a report from the New York Post, which obtained a hard drive containing the emails from former New York City Mayor Rudy Giuliani. However, other allegations have surfaced in recent reports over the days, including from a former Hunter Biden associate.

Biden’s campaign and other top Democrats, including House Intelligence Chairman Adam Schiff (D-Calif.), said the revelations are part of a Russian-backed disinformation plot.

In a statement on Wednesday, Biden campaign spokesman Andrew Bates told Fox News: “The Attorney General of Delaware’s office indicated that the FBI has ‘ongoing investigations regarding the veracity of this entire story.’ And it would be unsurprising for an investigation of a disinformation action involving Rudy Giuliani and those assisting him to involve questions about money laundering, especially since there are other documented inquiries into his dealings.”

“In fact, Donald Trump’s own national security adviser warned the president that material furnished by Giuliani should be considered tainted by Russian interference,” he said.

Director of National Intelligence John Ratcliffe has said that the emails and alleged Hunter Biden laptop are not part of a Russian disinformation campaign and the FBI declined to challenge that assertion.

Twitter and Facebook quickly acted to limit the reach of the NY Post’s report, and the newspaper is still locked out of its account, according to editors who work there. Meanwhile, critics of legacy media outlets, including President Donald Trump, have accused news companies of not addressing or following up on the Post’s reports or asking Biden questions about the allegations.

This week, Joe Biden criticized Giuliani, President Trump, and dismissed allegations that his family profited from his name abroad.

“This is the same garbage—Rudy Giuliani, Trump’s henchmen,” he told a Wisconsin TV station. “It’s a last-ditch effort in this desperate campaign to smear me and my family.” Before that, Biden campaign spokesman Andrew Bates said the former vice president “carried out official U.S. policy toward Ukraine and engaged in no wrongdoing” and “Trump administration officials have attested to these facts under oath.”

The New York Post had published alleged emails suggesting Hunter arranged to hold a meeting between a Ukrainian gas company executive and Joe Biden in April 2015. Some Biden allies have admitted it’s possible he informally spoke with the official, Vadym Pozharskyi, and neither he nor the campaign disputed the authenticity of the emails sourced from Hunter Biden’s alleged laptop.

On Thursday, Tony Bobulinski, whose name and email appear in the recipient list of the email, told The Epoch Times in an email that the deal outlined in the message concerned a partnership between Chinese energy firm CEFC and the Biden family. The email had details of proposed payout packages and equity shares in a Biden venture with a now-defunct Chinese energy conglomerate.