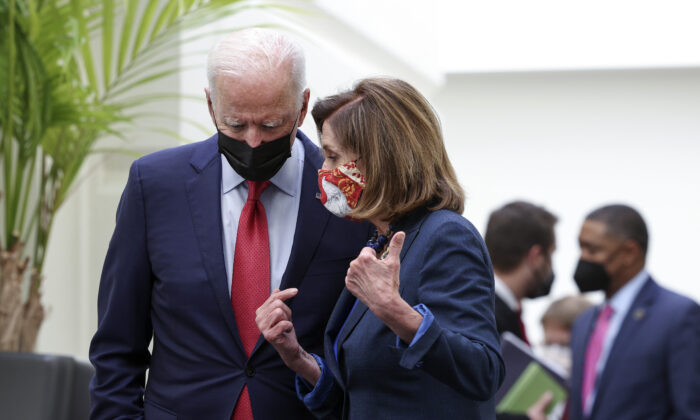 Pelosi Doubles Down on IRS Looking Into Bank Transactions

Speaker of the House Nancy Pelosi (D-Calif.) has doubled down on a provision in the Democrats’ multi-trillion-dollar reconciliation bill that would allow the Internal Revenue Service (IRS) to see information on all Americans’ bank transactions totaling $600 or more. Republicans and banks have raised the alarm about the provision, reporting that their constituents and clients are deeply concerned about the proposal.

Since the introduction of their reconciliation bill, Democrats have insisted that the bill will not add to the debt or the deficit, claiming that all new spending in the bill will be paid for.

Along with significantly increasing marginal tax rates to pay for the bill, Democrats proposed and wrote into the bill a section to allow the IRS to gather Americans’ private information from banks, including information on all transactions totaling more than $600.

Republicans and banks have reported hearing concerns from their constituents and customers over the plan.

During a Tuesday press conference, a reporter cited these concerns to Pelosi, asking her if the new IRS scheme would stay in the bill.

She was also asked what she would say to Americans concerned about the proposal.

Pelosi dismissed these concerns as anecdotal, doubting whether people actually had serious concerns about the plan. “With all due respect, the plural of anecdote is not data,” she snapped.

She went further and defended the proposal. “If people are breaking the law and not paying their taxes, one way to track them is through the banking measure,” she explained.

Yellen defended it, saying “I don’t believe it’s an invasion of privacy and look, the IRS gets a great deal of information that it needs in order to make sure the taxpayers comply with the tax code.”

Rep. Richard Neal (D-Mass.), chairman of the House Ways and Means Committee, has praised the $80 billion investment in the IRS and the agency’s ability to access small bank transactions, saying Democrats want to ensure tax fairness and to make sure the wealthy do not dodge their tax obligation under the new tax plan.

After the proposal was made public, a laundry list of private sector businesses and banks expressed serious concerns about the proposal in a letter addressed to Pelosi and House Minority Leader Kevin McCarthy (R-Calif.).

The coalition wrote: “While the stated goal of this vast data collection is to uncover tax dodging by the wealthy, this proposal is not remotely targeted to that purpose or that population. …  [The plan] would create tremendous liability for all affected parties by requiring the collection of financial information for nearly every American without proper explanation of how the IRS will store, protect, and use this enormous trove of personal financial information.”

They added, “Privacy concerns are cited as one of the top reasons why individuals choose not to open financial accounts and participate in the financial system. This proposal would almost certainly undermine efforts to reach vulnerable populations and unbanked households.”

The letter concluded with a plea to abandon the proposal.

McCarthy has argued passionately against the bill as a whole, and he joined the private sector in blasting the proposed measure.

The minority leader told reporters, “While [Democrats] grandstand about taxing the rich, they have created a new IRS surveillance program designed to target low- and mid-income earners.”

“Especially,” McCarthy added, the program would target “[those who] rely on tips to make [a] living.” Often, tips are given in cash, making them untraceable by the IRS. Under the new program, the IRS would be able to track these tips through transaction data.

He continued, “President Biden wants to hire 1,000s of new IRS bureaucrats and give them the authority to snoop into your bank account to monitor every single transaction you make: no warrants, no permissions, no limits.”

The California Republican concluded, “This surveillance program crosses a line, it’s un-American.” He promised that “Republicans will do everything possible to stop it before it ever gets off the ground.”

In the Senate, Minority Leader Mitch McConnell (R-Ky.) has also blasted the plan.

“They want to finance their spending spree by effectively treating every ordinary American as if they were under IRS audit,” said McConnell. “I must have forgotten when the president campaigned on giving everybody their own audit!”

Sen. Tommy Tuberville (R-Ala.) decried the plan in a press release as “[violating] the liberty of every freedom-loving American who values their financial privacy.”