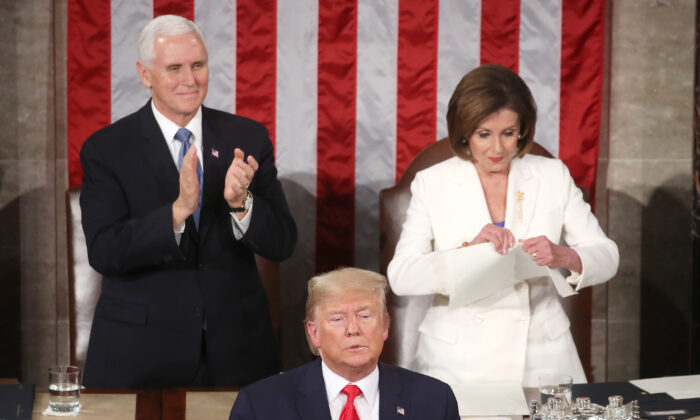 House Speaker Rep. Nancy Pelosi (D-Calif.) rips up pages of the State of the Union speech after U.S. President Donald Trump finishes his address in the chamber of the U.S. House of Representatives in Washington on Feb. 04, 2020. (Mark Wilson/Getty Images)
Viewpoints

For seemingly decades, our mainstream media friends have assured us, literally drilled into our brains, that House Speaker Nancy Pelosi is the master strategist of our time, a veritable political genius of extraordinary proportions.

I beg to differ.

She seems closer to a 9-year-old who’s out of control.

She demonstrated this during the State of the Union address when, sitting behind Trump during his speech, listening to accomplishment after accomplishment, she fidgeted like a third-grader with an attention deficit disorder and then, on the president’s conclusion, stood up in full view of everyone and made a show of ripping her hard copy of his speech in half.

For a split second, I wondered if she was having a nervous breakdown. It was such a bizarre display on live television, bound to turn off, even sicken, any normal person viewing it. I imagined video replays of her behavior all over Twitter from now until November. (They’ve already started, as I’m sure some of you know.)

It was as if Pelosi were a secret agent working under deep cover to reelect Donald Trump.

But then I realized if that were so, the claque of white-clad, scowling Democrat congresswomen sitting on their hands through the entire speech—even when it was announced women had garnered 72 percent of all new jobs—would also have to have been secret Trump agents.

And then the extension of this would have been that the entire impeachment fiasco was a clandestine plot to reelect the president, because, so far, that is exactly what it has been, raising Trump’s approval number on Gallup to 49 percent, a record and apparently equal to George W. Bush’s at the time of his relatively easy 2004 reelection. (The GOP is at 50 percent for the first time since 2005!)

A replay of the Clinton impeachment, this had been predicted by many, but nobody listened.

Especially Pelosi. It was her idea—after she had said she wouldn’t support such a thing unless it was bi-partisan, which it never would be. But then she changed her mind, as we all know, egged on by the Solomonic likes of Reps. Alexandria Ocasio-Cortez and Maxine Waters.

This is a master strategist?

As if the Democrats needed more problems with Fiasco II—the Iowa caucuses—yet unresolved.

Speaking of which, I had covered the 2016 version of those caucuses for PJ Media, and must say I was not surprised by the resulting chaos. Caucuses are interesting in a quaint, anthropological way, but as democracy, they leave a lot to be desired, the absence of the secret ballot being one rather crucial example—unless you want your boss and your ex-wife to know how you’re voting.

Caucuses—which exist to a great degree as Chamber of Commerce boondoggles—deserve to go the way of the dodo bird, but I will be covering the Feb. 22 Nevada caucus for The Epoch Times, so I reserve the right to amend and extend, as they say.

But back to the Democrats’ and Pelosi’s acting out like children (very young children) at the SOTU. Its etiology is all too obvious. How do you deal with an incumbent whose track record (despite the tweets and whatever) is as extraordinary as Trump’s, especially when you failed miserably at your impeachment gambit?

Or you grow up.

They chose the former.