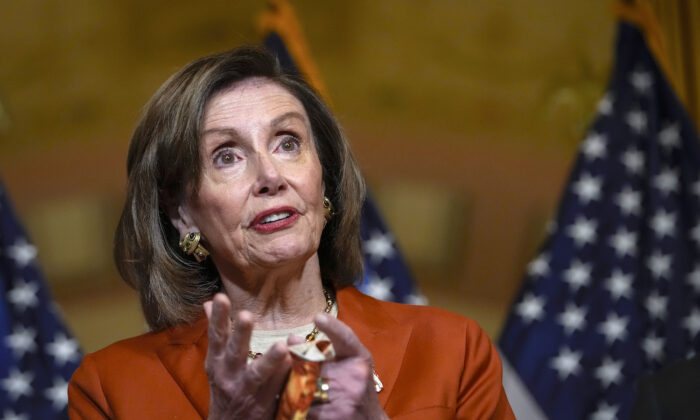 Speaker of the House Nancy Pelosi (D-Calif.) speaks at the U.S. Capitol in Washington, on Dec. 3, 2021. (Drew Angerer/Getty Images)
Democrats

Most critically, the law began requiring members of congress to disclose trades made by themselves, their spouse, or their dependent children publicly and quickly.

Insider’s report found that a large, bipartisan swath of 49 members in both chambers had violated these laws. These include, among many others, big names like Sens. Dianne Feinstein (D-Calif.) and Tommy Tuberville (R-Ala.), and House Reps. Debbie Wasserman (D-Fla.) and Dan Crenshaw (R-Texas).

In light of this report, Pelosi was asked by a reporter whether Congress members should be barred from stock trades.

“No,” Pelosi said quickly. “We have a responsibility to report [our trades] … [and] if people aren’t reporting, they should be.”

Pressed to explain her “no,” Pelosi argued, “Because we’re a free market economy. [Members of Congress] should be able to participate in that.”

While Speaker Pelosi’s name did not appear in the report, Pelosi and her husband have made millions from stock trading since she has been in office. In fact, the Pelosis have been so successful in their stock trades that small-time investors on the social media platform TikTok began a trend of following the Pelosis’ financial releases and copying their trades to make money.

But others see the Pelosis’ trades as more problematic in view of Speaker Pelosi’s significant power and access to nonpublic information that could affect the stock market.

For instance, in July, just as the House was trying to advance antitrust legislation targeted at tech monopolies, Paul Pelosi made a bullish bet in favor of Google parent company Alphabet, while others were pulling out over concerns about the House’s pending legislation. This ultimately paid off for Pelosi, netting him $5 million.

The antitrust bill received bipartisan support, and despite being marked up, voted on, and passed through the House Judiciary Committee, action on the bill suddenly stalled, and it has sat in congressional limbo since June.

Nancy Pelosi’s spokesperson quickly denied any allegations of insider trading, saying “The speaker has no involvement or prior knowledge of these transactions.”

And these allegations against Pelosi and her husband are nothing new.

In 2011, NBC’s 60 Minutes aired an episode that accused several prominent lawmakers, including Pelosi, of insider trading.

According to that report, Paul Pelosi bought $2 million of stock in Visa in March 2008. Later the same year, the House Judiciary Committee passed legislation that would have addressed card issuers’ “swipe fees,” a bill that would have hurt the bottom line of big name card issuers. But that bill was also suddenly and inexplicably dropped and was never brought to the House floor.

Observers at the time accused Pelosi of using her influence as speaker to snuff the bill, a charge she vehemently denied.

But not long after this report, Congress passed the STOCK Act, which included the so-called “Pelosi provision”—a clause that forbade members of Congress from receiving early access to private stock offerings simply because of their position.

In December 2020, Paul Pelosi bought 25 call options in Tesla, one of the leading electric vehicle (EV) manufacturers worldwide. Both during the campaign and after being declared victor, President Joe Biden emphasized the importance of EVs in his administration’s efforts to reduce U.S. carbon emissions.

Since then, Speaker Pelosi has been outspoken in support of the Build Back Better bill, which includes, among other climate provisions, hundreds of billions in funding for an EV tax credit and an EV charging station network.

The purchase quickly raised some eyebrows as commentators considered the ethics of such a purchase ahead of Biden’s pro-EV regime.

Pelosi’s position on members of congress trading is far from a universal position among those in her party.

In a Dec. 7 tweet, Rep. Alexandria Ocasio-Cortez called it “absolutely ludicrous” that members of Congress are allowed to dabble in the stock market, suggesting that the power members of congress have to access information gives them an unfair advantage in the market.

“The access and influence we have should be exercised for the public interest, not our profit,” Ocasio-Cortez wrote. “It shouldn’t be legal for us to trade individual stock with the info we have.”

In a statement given to Insider, progressive Sen. Elizabeth Warren expressed much the same sentiment.

“We need both tougher laws and enforcement of those laws,” Warren said.

“The American people should never have to guess whether or not an elected official is advancing an issue or voting on a bill based on what’s good for the country or what’s good for their own personal financial interests,” she added.