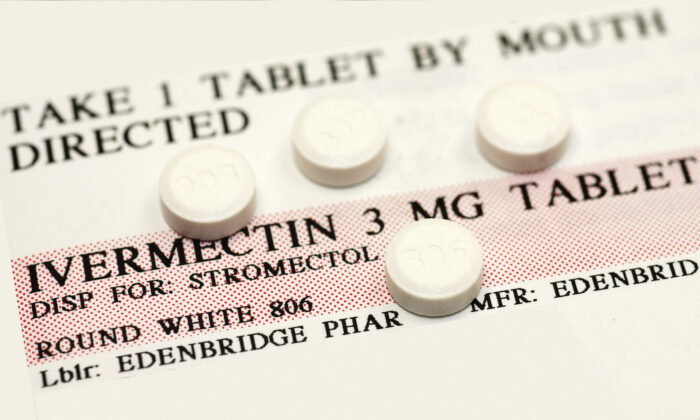 Marina Zhang
Marina Zhang is a health writer for The Epoch Times, based in New York. She mainly covers stories on COVID-19 and the healthcare system and has a bachelors in biomedicine from The University of Melbourne. Contact her at marina.zhang@epochtimes.com.
View profile
biggersmaller
Print

Both sides of the debate surrounding the controversial drug, ivermectin, agree it can kill SARS-CoV-2, the virus that causes COVID-19. But some groups have characterized the drug as a COVID-19 “cure,” while others have classed it as “dangerous.”

While many published studies advise against using ivermectin for COVID-19, studies that showed statistically-significant benefits for the treatment have been taken down and retracted “without explanation.”

That’s according to Dr. Pierre Kory, a pulmonary and critical care medicine specialist who is the president and co-founder of the Front Line Critical Care Alliance (FLCCC).

Kory and a number of other physicians who support ivermectin use in treating COVID-19, especially in early treatment, were among those whose papers on ivermectin were retracted by journals that Kory alleges are “beholden to Big Pharma.”

“We saw peer reviewed articles—articles that passed peer review by experts in their field, including my own—retracted without explanation,” Kory said on Sept. 10 at a “Reclaiming Medicine” conference hosted by the Australian Medical Professionals’ Society (AMPS) in Melbourne, Australia.

“I have numerous colleagues whose papers that were supportive of ivermectin in reasonably high impact journals—they were retracted. And then the only thing you’ll ever see published in high impact journal are supposedly negative studies,” he said.

“What I have noticed after having identified ivermectin, [and] publishing the first comprehensive review paper, is that we’ve had unrelenting media attacks on us as researchers.”

Kory said he has first hand knowledge of 88 controlled trials, including all of the health ministry programs around the world, that successfully used ivermectin in early COVID-19 treatment.

“I know the drug works and I’ve been disseminating that knowledge. Unfortunately, the narrative is that it doesn’t work and that it’s a horse dewormer,” Kory previously told host Jan Jekielek on Epoch TV’s American Thought Leaders program.

“They base that on a couple of trials published in high impact journals, and then they try to dismiss the drug. All of the complaints are from physicians and pharmacists. Not one patient has ever submitted a complaint against the care that I’ve delivered, and that pertains to my entire career,” he said.

At the conference, Kory identified three examples of manuscripts on ivermectin that were retracted after they were submitted to medical journal publications and passed peer review.

One example was a manuscript by Elgazzar et al., titled “Ivermectin for Prevention and Treatment of COVID-19 Infection: A Systematic Review, Meta-analysis,” which was retracted “without any opportunity of reply,” according to a letter to the editor by researchers Bryant et al.

Elgazzar’s manuscript was accused of data fabrication and plagiarism.

The second example was a review article by Zaidi and Dehgani-Mobaraki titled, “The mechanisms of action of ivermectin against SARS-CoV-2—an extensive review,” which was retracted by a journal’s editor-in-chief, who cited concerns with its methodology and conclusion.

“[T]he cited sources do not appear to show that there is clear clinical evidence of the effect of ivermectin for the treatment of SARS-CoV-2. The Editor-in-Chief therefore no longer has confidence in the reliability of this review article. None of the authors agree to this retraction,” the retraction notice states.

The third example was Kory’s own research article titled, “Review of the emerging evidence demonstrating the efficacy of Ivermectin in the prophylaxis and treatment of COVID-19,” which he said was also retracted after passing peer-review.

Kory’s article was later amended by removing its original reference to the study by Elgazzar et al.

Omura shared one quarter of the Nobel prize in physiology or medicine in 2015 for his discoveries in ivermectin for river blindness and elephantiasis. One of the retracted study’s co-authors is Dr. Morimasa Yagisawa, the lead author of the study and Omura’s colleague.

“This [paper] was published by the Nobel Prize winner himself, he’s the world expert on ivermectin, and that was also ignored, and his pleas to use ivermectin were ignored,” Kory said.

In an interview with ABS-CBN news, Yagisawa said the World Health Organization (WHO) and other relevant state drug regulators “neglected all of such small trials” of ivermectin in COVID-19, stating supposed “heavy bias” and the need for three-phase studies, including placebo-controlled trials.

Kory told the conference: “You’re dealing with the vast amount of the nation’s, or the really the world’s, physicians who literally and very strongly believe that ivermectin is dangerous, it’s ineffective. [They’ve been led to think], ‘Only conspiracy theorists and unvaccinated people would ever want to use ivermectin.’ It’s absolutely atrocious what’s happened.”

He added: “This has never happened in our collective careers, ever. You have to understand something went really wrong in COVID.”

During a typical peer review process, an academic paper is scrutinized by other academics anonymously. The process is intended to see whether the paper passes muster, including to see whether findings from the study are valid, meaningful, or whether a given experiment performs its intended function. Peer-reviewed papers are generally considered to be more credible and valid compared to pre-prints—papers that have not been reviewed.

A retraction occurs when a published paper is deemed at a later time to be erroneous. This can be damaging to a researcher’s employment, funding, and reputation. Retractions are particularly damaging if initiated by the publisher or the editor, rather than the authors themselves.

Self-retractions initiated by the authors usually occur when authors later find mistakes in their study after publication. Such a move is generally associated with humility and integrity to further the accuracy of the sciences.

But when the editor or publisher retracts a paper, they usually say the decision was due to the alleged use of fraudulent data, plagiarism, untrue authorship claims, and other general misconduct related to professional code of ethics. All such reasons cited can impact the study authors’ reputation.

Evidence on Ivermectin Dismissed in Australia

Dr. Phillip Altman—a veteran and expert in the areas of clinical medical research and pharmaceutical drug regulatory affairs in Australia—said he made detailed submissions to Australia’s national COVID-19 Clinical Evidence Task Force where he provided successful national campaigns of early treatment of COVID-19 with ivermectin for hundreds of millions of people in India, Mexico, Peru, and Brazil.

“These so-called experts did not even bother to respond,” he said on Sept. 10 at the “Reclaiming Medicine” conference.

The Therapeutic Goods Administration (TGA), Australia’s medicine and therapeutics regulator, said in a statement to The Epoch Times that while it “welcomes and encourages discussions” with prospective sponsors on the regulation process for potential COVID-19 treatments, “as at 15 September 2022, no application has been submitted to the TGA to support the use of ivermectin, either alone or in combination, for the treatment or prevention of COVID-19.”

In Australia, doctors are permitted to prescribe ivermectin only for conditions approved by TGA. These conditions include scabies and certain parasitic infections. COVID-19 is not TGA-approved for ivermectin prescription.

The TGA told The Epoch Times in an emailed statement that “more evidence” is required before ivermectin can be considered “a safe and effective treatment option” for COVID-19.

“This is the consensus view of international regulators and several top-tier medical journals,” a TGA spokesperson said.

Additionally, the U.S. government’s National Institute of Health (NIH) recommends against the use of ivermectin for the treatment of COVID-19, except in clinical trials.

But at the same time, agency has long approved ivermectin to treat certain parasites, head lice, and skin conditions like rosacea. Ivermectin has also been featured on the WHO’s List of Essential Medicines for decades.

At the “Reclaiming Medicine” conference, Kory pointed to C19early.com, a website that compiles findings from hundreds of studies on various early treatment options for COVID-19.

The websites show the treatment benefit of each option through a forest plot.

A reading less than 1 indicates that the treatment option is better than doing nothing, and ivermectin has a number below 0.4 across 91 different studies, with an average improvement of 62 percent in overall improvement and 83 percent improvement as a prophylaxis—all significant results.

“If you look at the forest plot, these are all of the trials showing that it is large magnitude benefits [from ivermectin]. And when you average these and summarize all the patients, you find an astounding massive improvement in numbers of clinical outcomes,” Kory told the conference.

“If their efficacy was known to the world, it would blow up a marketplace in the hundreds of billions of dollars.

The Epoch Times has reached out to the FDA for comment.

A recent literature review published in the Journal of Antibiotics in 2021, a Nature-affiliated journal, found that ivermectin could pose 20 different actions against the SARS-CoV-2 virus. These actions fell under umbrella functions that included preventing viral entry into host cells, and preventing viral propagation and inflammation.

The literature review cited an article published in Frontiers in Microbiology, in which authors compared ivermectin, chloroquine, hydroxychloroquine, remdesivir, and favipiravir for their ability to bind to target SARS-CoV-2 target proteins and block their actions.

Ivermectin showed that it had the highest binding affinity to S subunits on the spike protein, a component involved in viral entry. Authors stated the results imply that ivermectin is the most effective at impeding spike protein actions.

The drug can also bind to multiple sites on TMPRSS2, a SARS-CoV-2 protein that is critical to viral fusion into the cell. In the open configuration, ivermectin can also bind with greater affinity to the virus than remdesivir.

Ivermectin also had effects against viral spread in host cells, authors noted. According to the paper, when cells are infected by a virus, the cells send out messages to other nearby cells to inform them of a viral infection, making the cells more resistant to the virus. This message is impaired in COVID-19 by the SARS-CoV-2 virus, but the ivermectin inhibits this viral action.

Ivermectin is also an anti-inflammatory, and can therefore prevent the over-activation of many inflammatory pathways, thereby preventing severe COVID-19 symptoms such as systemic inflammation, ongoing fever, pain, and so on, authors wrote.

Marina Zhang
Marina Zhang is a health writer for The Epoch Times, based in New York. She mainly covers stories on COVID-19 and the healthcare system and has a bachelors in biomedicine from The University of Melbourne. Contact her at marina.zhang@epochtimes.com.