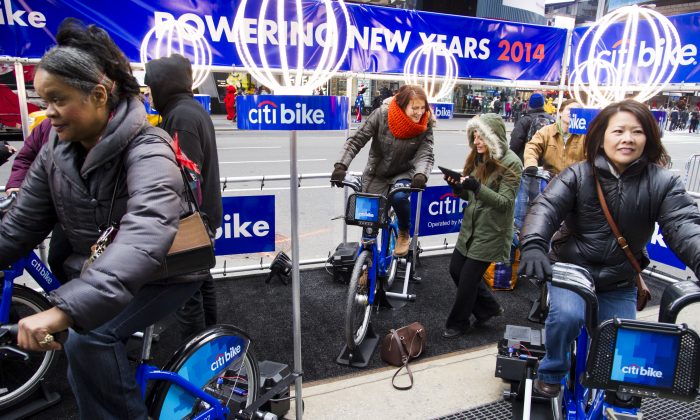 Pedaling to Power the Party at Times Square

NEW YORK—There’s something satisfying about riding a bike. You feel healthier than your car-commuting peers, it’s greener, more cost effective, and in many cases, the fastest way to get around.

It also means not feeling guilty about having a bacon sandwich for breakfast.

And in the case of a special Citi Bike station at Seventh Avenue and 42nd Street, riders are creating energy that will help power the Times Square ball drop on New Year’s Eve.

The set up in Times Square is a like an outdoor spinning class, with beats from Lady Gaga and Katy Perry booming from the speakers, and a promoter encouraging people to join in the energy-saving effort.

Riding the stationary bikes won’t get you anywhere, but pedaling constantly for around an hour can generate 70 watts of energy. The ball drop consumes around 14,000 watts.

“We hope to generate 3,000 watts by the end of Monday,” said Ned Flint, promoter of the energy-generating bikes.

Six bikes are on site for passersby to jump on and start making those watts. The kinetic energy collected from the pedaling is collected onto batteries and is then transferred to the city’s grid to offset the power used for the ball drop.

The rain caused a stream to form near the station by lunchtime Sunday. But that didn’t put off some impulse riders, most of whom were from other countries or out-of-town. Many hopped on for a few minutes before hopping off again for the complimentary hot chocolate.

The Hartnetts, a family visiting from the United Kingdom, joined the bike effort. Eamon Hartnett felt it was a great idea to help power the ball drop via Citi Bikes. His father, a taxi driver in London, remarked that his experience with tipsy cyclists riding Boris Bikes (London’s equivalent of Citi Bikes) on New Year’s Eve was a nightmare.

Citi Bikes will be set up on Times Square until Monday—so there is still time to help the effort.

All riders at the special station get a free Citi Bike day pass and complimentary hot chocolate.