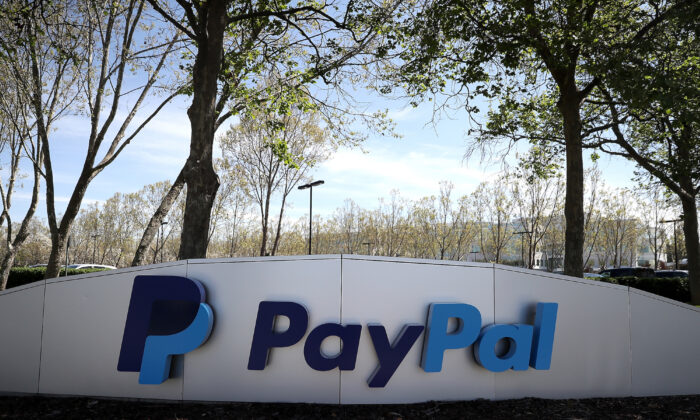 PayPal’s stock dropped more than 6 percentage points on Monday after reports emerged that the firm may attempt to fine people $2,500 for spreading “misinformation” via the platform.

Over the weekend, the company told The Epoch Times that “PayPal is not fining people for misinformation and this language was never intended to be inserted in our policy,” adding, “An [acceptable use policy] notice recently went out in error that included incorrect information,” the statement said.

But before, the firm had expanded its policy to prohibit “the sending, posting, or publication of any messages, content, or materials” that “promote misinformation” or “present a risk to user safety or wellbeing.”

Individuals who violated the policy could face a fine of $2,500 taken from their PayPal account for each violation. That policy was supposed to go into effect on Nov. 3.

Users were directed to PayPal’s user agreement, which states in part that PayPal can take a number of actions if users participate in restricted activities, such as holding their money in balance indefinitely. It also says that “you will be liable to PayPal for the amount of PayPal’s damages caused by your violation of the Acceptable Use Policy” at the amount of $2,500 per violation.

That money will cover internal administrative costs for PayPal to monitor and track violations and damage to PayPal’s brand, among other costs, according to the agreement.

“A private company now gets to decide to take your money if you say something they disagree with. Insanity,” former PayPal President David Marcus wrote on Twitter.

Elon Musk, the head of Telsa who co-founded PayPal decades ago, said that he “agreed” with Marcus’s Twitter post.

Over the weekend, users on Twitter called for a boycott of PayPal and users indicated that they stopped using the payment company’s services. After PayPal’s mea culpa, critics of the firm did not appear convinced that the policy was issued in error.

Dan Held, the former chief of growth marketing for cryptocurrency exchange Kraken, wrote that users should delete accounts with the payment services provider.

“PayPal freezing funds for thought crimes is despicable,” he wrote over the weekend.

As of Monday morning trading, the San Jose, California-based firm’s stock slumped 5.5 percent. It’s down more than 50 percent in 2022.

Several weeks ago, PayPal banned a group named “Gays Against Groomers” that some LGBT activists claimed to be a “hate group.”