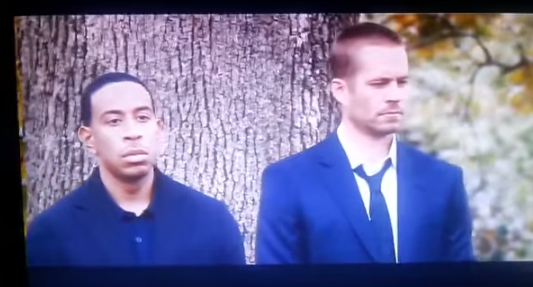 Paul Walker is part of the cast in a leaked “Fast & Furious 7” video clip that is being circulated on YouTube.

The origin of the clip is unclear but it shows Walker as Brian O’Conner, along with Ludacris, Tyrese Gibson, and Vin Diesel as their respective characters–Tej, Roman, and Dominic Toretto–at a funeral for Han (Sung Kang), who died at the end of “Fast & Furious: Tokyo Drift.”

In a possible nod to Diesel’s Toretto taking over as the main character of the franchise, he is front and center, placing a picture of Han’s girlfriend Gisele on Han’s coffin. Gisele died in “Fast & Furious 6.”

The scene also gives a glimpse of the crew realizing that they are now targets, for killing Ian Shaw.

Owen Shaw (Jason Statham) will be introduced in the seventh installment of the popular series as the main villain, looking to avenge his brother’s death.

The crew notices several cars rolling around the cemetery, with Ludacris saying “We’re being hunted.”

Walker barely says anything in the scene.

The actor died suddenly in November 2013, meaning that the scene was filmed before then in Atlanta.

The clip was published in February 2014 but is being circulated now thanks to Access Atlanta, which published it on its website on June 10, 2014.

Other regulrus will be returning such as Michelle Rodriguez as Letty Ortiz and Jordana Brewster as Mia Toretto. Stars from “Tokyo Drift” will also join the fun, including Lucas Black as Sean Boswell and Nathalie Kelly as Neela.