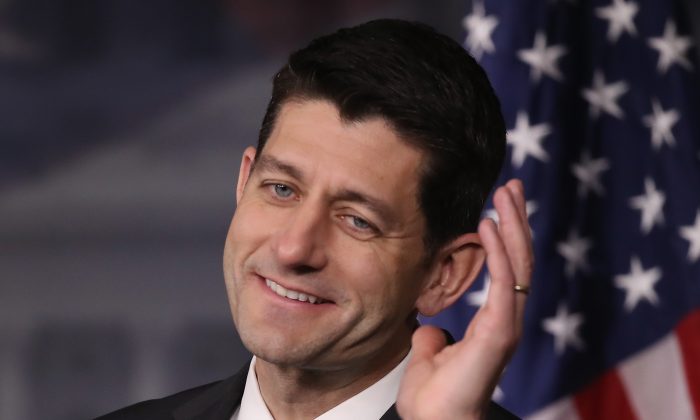 House Speaker Paul Ryan (R-WI), speaks to the media during his weekly news conference at the US Capitol, May 19, 2016 in Washington, DC. (Photo by Mark Wilson/Getty Images)
Politics

House Speaker Paul Ryan (R-WI) has been in an awkward position since the Republican party chose Donald Trump as their presumptive nominee.

Since last year, Ryan has not only been a vocal opponent of the presumptive nominee’s policies and propositions, but also of his “style of politics.”

“When people go to the polls in November, they are not just picking a person … they’re also picking a path,”said Ryan on Politico’s “Off Message” podcast.

“I think this is a ‘we,’ not just one person,” he said. “I very much believe in a type and style of politics that may not be in vogue today but, I still think, nevertheless, is the right kind of politics.”

And that is one fundamental difference that makes it hard for Ryan to get behind Trump—style.

The contrast couldn’t be clearer. On one hand Trump, 69, styles himself as an off-the-cuff speaker who shoots from the gut when it comes to policy, interviews, speeches, and his Twitter feed.

Conversely, Speaker Ryan, 46, cuts the portrait of a young, ambitious, and—most importantly—a measured politician in his approach, with a firm foundation in conservative principles.

Ryan, the former vice presidential candidate for Mitt Romney’s 2012 Republican campaign, wants the Republican party to be the party of unity, the party of Reagan, and the party to fight against Hillary Clinton in November.

However, in order to get his endorsement, Trump will have to earn it by being “a standard-bearer that bears our standards,”as he explained when he said that he “just wasn’t ready” to endorse to presumptive Republican nominee.

When asked in the “Off Message” interview whether or not Trump has a chance to win, the Speaker of the House predicted that there would be a lot of “Trump Democrats”—a reference to Ronald Reagan’s “Reagan Democrats” which helped him carry the 1980 election against Jimmy Carter by a landslide.

He wouldn’t say whether or not he would bet on the Republican nominee, however. “I’m not going to—I’m not a betting man,” he said before pivoting to the subject of unifying the party behind a tempered president:

“I think if we get our party unified, and if we do the work we need to do to get ourselves at full strength, and if we offer the country a clear and compelling agenda that is inspiring, that is inclusive, that fixes problems, that is solutions-based and based on good principles, then, yes, I think we can win.”