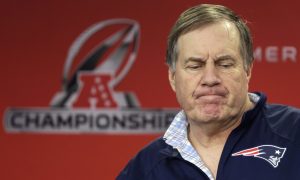 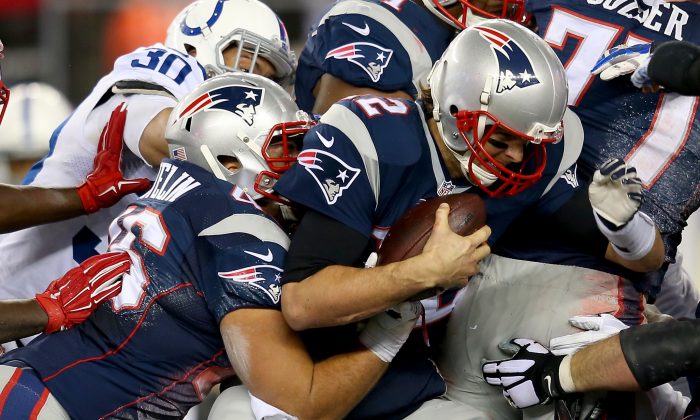 Tom Brady of the New England Patriots (C with the football) at the 2015 AFC Championship Game in Foxboro, Mass., on Jan. 18. The Patriots have been accused of using underinflated footballs. (Jim Rogash/Getty Images)
NFL

The New England Patriots, who are being investigated by the NFL for playing with significantly under-inflated footballs against Indianapolis in the AFC title game, have been the recipients of a remarkably-low fumble rate ever since quarterback Tom Brady (coincidentally) lobbied the NFL in 2007 to change its rules to allow the road team to use their own footballs, according to a report by Warren Sharp on sharpfootballanalysis.com.

Since that time, the Patriots fumble rates are much better than the rest of the NFL.

Do we dare ask, why was the change requested?

According to the study, which compared the number of Patriots fumbles on offensive plays from 2000 (when Bill Belichick came on board) through 2006 (the last year before the rule change) versus the rest of the NFL (excluding dome teams) and then comparing the same teams since that time, the Patriots averaged 76 touches per fumble from 2007-14, while the rest of the league averaged 49. Previous to 2007, the Patriots had been right in line with the rest of the NFL.

The only year from 2007-14 that New England was in line with the rest of the league was 2013, when they coughed up the ball once every 49 touches. However, the number is skewed a bit thanks to a frigid Sunday night game (22 degrees with a wind chill of six) against Denver where the Patriots fumbled six times—they only fumbled 23 times all season.

“Based on the assumption that plays per fumble follow a normal distribution, you’d expect to see, according to random fluctuation, the results that the Patriots have gotten since 2007 once in 5842 instances,” said John Candido, a Data Scientist at ZestFinance who was involved in the research of this project. “Which in layman’s terms means that this result only being a coincidence, is like winning a raffle where you have a 0.0001711874 probability to win. In other words, it’s very unlikely that results this abnormal are only due to the endogenous nature of the game.”

Everyone in the NFL knows that turnovers are the number-one driving force behind who wins the game. Since 2000, the winner of the turnover battle also won the game 79 percent of the time, according to Sharp.

Furthermore, if Belichick has a secret technique to reduce fumbles, how are former players forgetting it when they move on to other teams?

What has happened since 2007 to allow the Patriots to have an incredibly-low fumble rate is unclear, but given the large sample size it can’t be by accident.