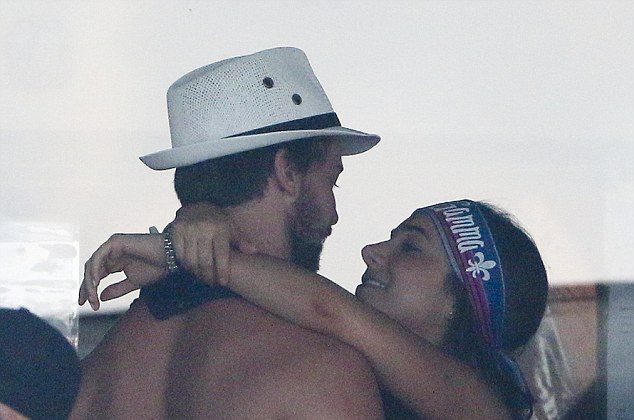 Patrick Schwarzenegger partying it up with mystery girl
News

Patrick Schwarzenegger… Apple Not Falling Far From the Tree?

MILEY. DUMP BAD APPLE PATRICK SCHWARZNEGGER NOW! This is only the tip of the iceberg.

Leave it to TMZ to break the latest unsavory tid-bit between Miley Cryus and Patrick Schwarzenegger.  I’m hoping Miley will have her wits about her enough to file this latest development under her “when a person shows you who they are – that’s who they are” folder.

I’m not sure how well Miley Cyrus already knows her beau of a mere few months… but people usually give us clues and hints of who they really are early-on along the way. While Miley may indeed be noted for her risque stage performances (produced by music industry professionals) we’ve never seen Miley conduct herself in her personal life as a loose or promiscuous woman.

Patrick Schwarzenegger however has just shed a new and  off-putting light on his character for the whole world to scrutinize… including Miley.  Did Patrick not think photos from this gathering would not find  its way into social media?

While Miley was only the day before spending time with Patrick’s family.  Patrick was partying-it-up in Cabo San Lucas and spending a lot of intimate time with a mystery bikini clad brunette.  They were hugged up together as well as walking arm in arm. Patrick later tweeted that is was a platonic friend and girlfriend of a pal of his.   The actual tweet read:

Well of course that explains everything!   Listen… I’m going to put a spin on this that I am not sure others have thought about since this story broke over the past 24 or so hours.  But first give me a moment and let’s reflect for a second on my girl Miley.

A timely new tweet surfaced on Monday from Miley that read:

“Don’t you ever let someone treat you like a yellow Starburst. You are a pink Starburst.”

“Surround yourself with people that reflect who you want to be and how you want to feel, energies are contagious.”

So we can assume from this that Miley isn’t some dim-witted, starry-eyed, school-girl who has fallen for Patrick’s tweet.  The question is will she forgive him and continue on in a union with him.  It’s my hope that she won’t and here’s why.

You know the old adage that the apple doesn’t fall far from the tree?  It has never been an adage that I’ve ever found myself to be in total agreement with.  Including myself, I can come up with dozens upon dozens of individuals who have risen above the faults and foibles of their parents.  Yet while there are always exceptions to these proverbial observations… I’ll admit that this adage has its place and Patrick Schwarzenegger is putting me in the mind of being a chip off of the old block… Arnold Schwarzenegger.

Moreover, I’m going to assert that Patrick’s damning photographs are far more than evidence of him cheating on Miley.   He didn’t even have to be “cheating” per se.  But he was having a darn good time with the ladies without her, and I’m going to go out on a limb and assert that these photos and Patrick’s conduct with the brunette were meant to be leaked…. and by Patrick himself.

Someone who knows that they are in the public eye and in a monogamous union, and looking for that monogamous union to flourish would not allow themselves to be seen in public in such a compromising position.  Hence, here are the scenarios that coincide with Patrick’s conduct.

One:  This is who Patrick is and Miley already knows it. She’s dim-witted and insecure and simply wants to hold on to him.  This scenario is not likely, and time will tell if she desires to  still hold on to him.

Two: Some relationships are indeed publicity oriented and everything you see from the beginning of the union to it’s finale is all orchestrated.  This happens more than one may think.

Three: Patrick and Miley were getting serious  and were practically engaged. Perhaps he just wants to get some fun out of the way before he ties the knot. Uhm… not likely.

Four:  He subconsciously wanted to get caught since the  talk of marriage? hmmm.  Maybe… but still doubtful.

Five:  Patrick simply revealed himself and he did so on purpose, and not necessarily because he wants out.

Again, you may ask why Patrick may do such a thing on purpose. I will elaborate.  I assert that men (and women) look to their parents as an example of what a partner is and what a partner does.  Patrick was raised in a household where he knew his father was a philanderer.  So even if he didn’t mean to get caught… he is now busted with respect to who he is.  I am not certain if there is a gene for men who require a variety of sexual stimulation or not. Perhaps his father had this gene and he (Patrick) too has the gene.

But in the case that there is no gene, then he is simply mimicking a conduct that he deems acceptable. Dad did it and mom (Maria Shriver) stayed with him for literally decades.

What may be shocking to some is that there are some men who like to make their women aware from the onset that…  I like to have my fun with the ladies when your’e not around so get used to it.  I prefer that you stay with me, but in any event…this is who I am.   This serves as an acid test to see what the woman will put up with.  If she lets this conduct slide.. he can now commence with the fun.

“OMG… this is my best friends girlfriend”….  Yeah right Patrick.  If this is really so,  I’d be hiding from my best friend right about now.