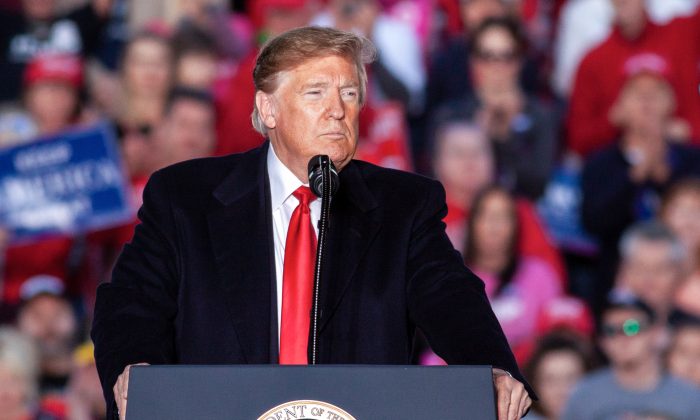 Just when you think something preposterous can’t get any worse, it does.

Usually, one’s first choice of words to describe tirades against President Donald Trump is “derangement syndrome,” a phrase so tattered by overuse that it should be pitched into the dustbin of political banalities. Analyzing Trump hatred requires an approach capable of heavier lifting and fortunately is supplied by Thomas Fleming in his account of the Civil War’s origins, “A Disease in the Public Mind.”

President James Buchanan uttered a variation of this title in his reaction to John Brown’s gory assault at Harper’s Ferry in 1859, which Fleming applied to events leading to America’s bloodiest war. He pointed out that the disease was reinforced by politicians and spread by an extensive media complex with “massive repetition,” afflicting “thousands and even millions of minds.”

Like disease, pathology is a medical term and aptly fits the repeated accusation that the president is not only “like Hitler,” but even worse than Nazi Germany’s genocidal dictator. Thus, regular CNN and MSNBC guest Bruce Bartlett wrote in a tweet: “Key differences between Donald Trump and Adolph Hitler—Hitler served honorably in the military, Trump didn’t; Hitler was faithful to his wife, Trump cheated on all his wives; Hitler wrote a book, Trump’s were all ghostwritten.”

He didn’t end there: “Immigrants are Trump’s Jews” and MAGA rallies rival the spectacular orchestration of Leni Riefenstahl’s “Triumph of the Will.” Keep in mind, he cautions, that this year of The Trump is merely the equivalent to 1933.

Which implies that our national nightmare will be over only when Trump dies, if not by suicide, then by the hands of those conniving Russians—a scenario given full-throttle embodiment by The New York Times Book Review. Referencing the Mueller investigation, the newspaper’s editors opined that “it’s hard not to speculate about what might happen next,” and eagerly paraded scenarios of Hitler-Trump’s demise, with one depicting him being assassinated by a Russian agent.

This event would unfortunately come too late, according to the Southern Poverty Law Center and Paul Krugman, to prevent Trump from bearing responsibility for the horrible murders at the Tree of Life synagogue in Pittsburgh.

Multiply these psychotic charges many times and we’re left with a disease in the public mind, perhaps even worse than that which afflicted the nation during the events leading to the Civil War.

The documentary record of that era reveals the Aristotelian assumption that political science can distinguish between healthy and diseased states. In his debates with Stephen Douglas, for instance, Abraham Lincoln frequently described slavery as a “cancer” that had to be eradicated before it metastasized throughout the body politic. He insisted that the country couldn’t remain in a morally pathological condition indefinitely, or the cancer of slavery would continue on its lethal path and kill “the last best hope of earth.” In fact, promoting slavery as a “positive good” was morally insane and tantamount to a death wish—a pathological state of mind.

He was right, of course, which leads to speculations about how The Great Emancipator would react to America’s political disputes in the 21st century. One possibility is that he would view socialism as the moral equivalent to slavery, likely causing him to wonder why so many of the Union’s professional babblers—professors, politicians, and talking heads—promote it as a sort of “positive good.” If ignorance is a pathology, then we can safely conclude that supporters of an ideology that has claimed tens of millions of lives have lost their minds.

It wouldn’t be the first time an entire category of political thinkers lost its bearings, that is, descended from rational analysis to political pathology. For instance, J.L. Talmon stated, in “Political Messianism,” that his study explores the “expectations of universal regeneration” that dominated political thinkers during the first half of the 19th century.

Problem is, politics normally doesn’t ascend to the netherworld of “universal regeneration,” leaving that job to theologians and individuals in their private pursuits of happiness and fulfillment. Thus, his colleague Irving Kristol concluded that the subjects of Talmon’s work, in fact, had gone insane, were candidates for the “loony bin,” and should be understood as modern-type religious fanatics of a particularly dangerous kind; they were anything but dispassionate commentators on breaking events and significant political figures.

How does this fit into our understanding the pathology of Trump hatred? First, it’s happened before, which isn’t exactly a comfort but at least informs us that Trump’s tormentors have ignoble predecessors. Second, one of these predecessors deserves special attention, because his approach to political commentary exemplifies Kristol’s observations and also demonstrates the psychology of contemporary political criticism.

We’re talking about Karl Marx, whose powerful description of a human being divided against himself was projected onto the external world as Capital versus Labor. In Robert C. Tucker’s analysis, Marx descended from philosophy to myth, externalizing an internal drama of alienated man’s creative impulses, at war with his acquisitive compulsions. He amassed mountains of information that fitted his vision and ignored data that didn’t; reading his work tells you much about Marx’s mentality but little about external reality.

Trump haters conform to this pattern with laughable similarities: Their analyses are ludicrous, their information often fictitious, and their accusations are the subject of parodies and punchlines. In short, pathological. We learn much more about the president’s critics in their fulminations than we do about Trump.

Unfortunately, as with Marx and his followers, Trump haters have convinced a sizable percentage of the population to share their pathological views of the U.S. president and his politics. What remains takes us back to Buchanan’s original remark about a disease in the public mind; he called it “incurable.”

Americans of all political persuasions should hope that he was wrong about that.

Marvin Folkertsma
Follow
Marvin Folkertsma is a retired professor from Grove City College. He is the author of several books, including Ideology and Leadership, Agony of Survival, Criminal Intent, and The Thirteenth Commandment. Agony of Survival was an alternate selection of the Jewish Book Club and nominated for the National Jewish Book Award. He also is a frequent contributor of op-eds that have appeared in news publications throughout the country. His interests are wide-ranging and include American political institutions, political thought, literature, and American studies generally.