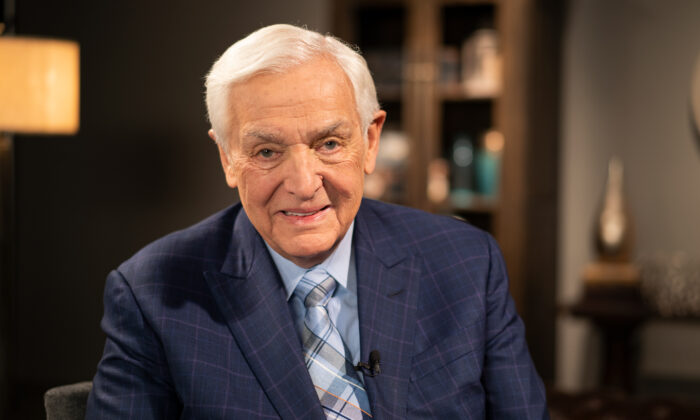 Pastor: Do Champions of Socialism Realize That Karl Marx Held a Deep Belief in God?

Jan Jekielek
Senior Editor
Jan Jekielek is a senior editor with The Epoch Times and host of the show, "American Thought Leaders." Jan’s career has spanned academia, media, and international human rights work. In 2009 he joined The Epoch Times full time and has served in a variety of roles, including as website chief editor. He is the producer of the award-winning Holocaust documentary film "Finding Manny."
View profile
Follow
and Melanie Sun

Karl Marx, the father of scientific socialism, once wrote that he knew he was born to God but was chosen for hell, author and radio host Dr. David Jeremiah said of many of the “aha! moments” he experienced in his year-long study of socialism, during which he read everything he could find on the ideology, including what motivated Marx in his ideological writings.

People don’t realize that Marx’s socialist theories are all based on a fundamental belief in the existence of God, but a hatred and opposition to everything God has taught, Dr. Jeremiah said.

“You know, socialists don’t believe that there is no God—they’re not atheists,” he told EpochTV’s “American Thought Leaders.” “They’re anti-God.” (Full on-camera interview on EpochTV coming in a few days).

“In fact, Karl Marx … was a cheerleader for the devil,” he explained of his research, which he said has given him a new way of viewing trends in news and social policy that he believes can help Americans understand the social turmoil in the country right now.

Dr. Jeremiah, a pastor and founder of Turning Point Radio and Television Ministries, recently released a book to share his findings about the dangers of socialism titled “Where Do We Go From Here?”

“Just about every chapter in this book, in some way or another, goes back to things that I learned about socialism,” he told host Jan Jekielek. “And now, what is so amazing to me is, because I’ve sensitized my mind and heart to all of this, every day on the news, I see vivid examples of what’s happening and how it’s affecting us as a nation.”

The culture of canceling everything you don’t agree with has bred the roots of totalitarianism in American society, Dr. Jeremiah warned.

He listed various negative trends, like parents being told that they shouldn’t have any say over the content taught in schools, Republicans and Democrats not being able to agree to disagree, and Christians being fired from their workplaces for sharing their faith, as examples of how Marx’s socialist ideas are eroding unity among people.

Censorship of ideas is not what Dr. Jeremiah grew up with in America, but has become normal social behavior in 2021.

“There’s nothing that is really true that should be afraid of challenge,” Dr. Jeremiah challenged. “If it’s true, it’s true. It shouldn’t be an issue for it to be challenged, because truth will win, no matter what the challenge is. But if it’s not true, then you can. So all the stuff that’s going on right now is interesting to me in light of that discussion, because … most of it is lies.”

In his book, Dr. Jeremiah describes socialism as “a deadly virus [that] is quietly spreading throughout our nation—far more lethal than COVID-19.”

But he warned that “most Americans are totally unaware of the threat that it poses to our way of life.”

“It’s like smoke coming under the door. You just see it a little bit, but it’s no big deal. [But] if we don’t become aware of it, it’ll be very destructive.

“That’s why I wrote the book,” he said. “I wanted to help people understand.”

He said that many readers have since told him, “You answered all the questions I didn’t know who to ask.”

“What I wanted to do is help them see the connectedness [sic] between so many of these things that are happening to us,” he said. “I wrote about the tearing down of monuments; it’s just not a bunch of rowdy kids out there trying to have fun knocking monuments down … Completely obliterate history so you can write a new one; that’s all part of how this whole thing works, that’s all a part of socialism.”

“Get rid of the things people hold dear, destroy the things that are at the core of who they are as people—their family, their church, their marriage—and then come into that vacuum, and bring all of this rottenness called socialism. And if people understand that, it makes them aware,” he said.

“We need to have an awareness of this because it’s deadly. It will destroy everything.

“Venezuela is a perfect picture of where we’re headed if we don’t stop this. It’s amazing to realize, just in our lifetime not long ago, Venezuela was the richest country in that part of the world. People had the same standard of living that we do.”

Dr. Jeremiah said he hopes that talking more about the truth of socialism and its anti-God beliefs will help more people understand the problems of today.

“One of his [Marx’s] key phrases was to wipe God out of heaven and capitalists off the earth. That was his two-fold program,” he said. “There’s a lot of university students who were captivated by this.”

“It’s really scary to me … some of the statistics I cited in this book really bear that out, that young people between 18 and 25—I think 60-some percent of them—think socialism is cool, it’s OK; more than anything else because of all the free stuff they get promised in the process.

“But when they understand the roots of socialism, it makes them stop and think,” he said.

He said he has seen many young people wake up to the truth about socialism.

“It leaves them empty,” he said of what often happens when socialism takes hold of a person’s psyche. “It takes them to a place where they don’t want to go, and they don’t realize it on the journey.

“[A]ll of a sudden, they wake up one day, and it doesn’t have anything to breathe into them, and they realize that. I see that a lot,” he said.

Dr. Jeremiah also commented that the church isn’t free of socialism either, with some people claiming to be practicing Christian socialists.

“Sometimes, they like to cite passages in the Bible, like in the book of Acts where they all held things together. But that wasn’t socialism; that was just a bunch of Christians sharing what they had during a tough time.

“There is no biblical basis whatsoever for socialism, either in the Old Testament or in the New Testament … because socialism is totally at the opposite end of the spectrum from what it means to be a God-fearing person,” he said.

In his research, Dr. Jeremiah said he hasn’t found one good story about socialism.

“All the reading I did and all the stuff I studied, everybody talks about it, I can’t find one good story that ends right because socialism is evil, and it takes people down, it doesn’t lift them up,” he said.