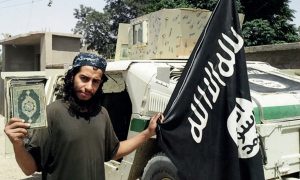 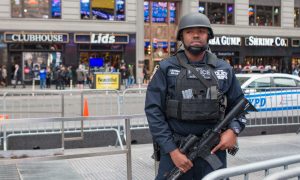 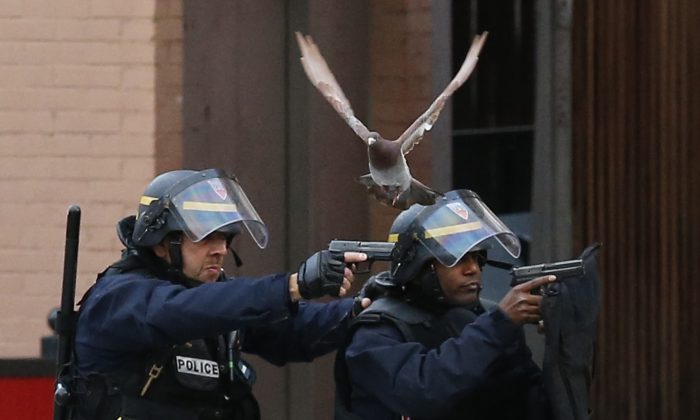 Police forces operate in Saint-Denis, a northern suburb of Paris, Wednesday, Nov. 18, 2015. Police say two suspects in last week's Paris attacks, a man and a woman, have been killed in a police operation north of the capital. Two police officers have been injured in the standoff. Police have said the operation is targeting the suspected mastermind of last week's attacks, believed to be holed up in an apartment in Saint-Denis with several other heavily armed suspects. (AP Photo/Francois Mori)
Europe

WARSAW, Poland—After the bombs and Kalashnikov fire of the Paris attacks, a mere document—a passport—found near the body of an attacker is generating a new wave of dread throughout Europe and beyond. But whether the document ended up there by chance, or was part of an elaborate plot to sow panic, is not clear.

Regardless of the answer, the passport has played into the Islamic State’s (ISIS) hands by raising concerns that militants may be marching alongside the thousands of asylum seekers flowing into Europe. That possibility is redefining the debate over immigration in Europe and even the United States, and prompting a backlash against Muslim refugees.

The far-right French leader Marine Le Pen called for an immediate end to the flow of migrants into France, while across the Atlantic about half of U.S. governors are taking steps to prevent absorbing Syrian refugees in their states, citing the passport.

“This terrorist attack will clearly change Europe’s refugee policies and how the arrivals in Europe are treated,” said Konrad Pedziwiatr, a sociologist and expert on Islam in Europe at the Krakow University of Economics.

“Already the open-door policy (in Germany and Sweden) of welcoming refugees was going to be reformed because the inflow is so significant that countries cannot cope with the numbers,” he said. “What the Paris attacks add to this difficult situation is the additional element of fear.”

A passport bearing the name of Ahmad Al Mohammad, 25, was found near one of the suicide bombers who blew himself up outside the Stade de France football stadium. It indicates that he entered Greece from Turkey on Oct. 3 and later passed through Serbia and Croatia, getting registered every new country. The passport’s authenticity has not been determined, but fingerprints of the attacker match those taken by Greece and Serbia. The other attackers who have been identified so far are all European citizens.

The oddness that a passport—an intact one—was found near a man who blew himself up is creating suspicions that it is part of a plan by ISIS to create a backlash against the refugees. “I have never heard of terrorists carrying passports with them,” Pedziwiatr said.

And authorities are also noting that the vast majority of migrants do not bother to get their passports registered along every step of their journey. Germany’s Interior Minister Thomas de Maiziere has said there is evidence the passport is “a trail that was intentionally laid.”

“At the very least it’s unusual that such a person was faithfully registered in Greece, Serbia and Croatia, even though we’re usually pressing for registration to take place and lament that it isn’t always done properly,” de Maiziere said Tuesday.

According to Greek officials, a man carrying a Syrian passport with the name Ahmad Al Mohammad set foot in Europe on Oct. 3, when he arrived on the island of Leros with 198 other migrants on a boat from the Turkish coast. Greek authorities registered him the same day, taking his particulars and fingerprints. French officials said the bomber’s fingerprints match a set taken in Greece in October.

On Oct. 7 he entered Serbia, where authorities took fingerprints that match those given in Greece, and he then crossed into Croatia the next day, according to a Serbian security official who spoke to The Associated Press on condition of anonymity because he is not authorized to speak to the press.

If the journey and the passport were indeed part of an intricate plot to generate greater fears of the migrants, the scheme is going according to plan.

U.S. Rep. Adam Smith, the ranking Democrat on the House Armed Services Committee, said during a hearing on Wednesday that there is no real evidence that any of the people who committed the Paris attacks were refugees.

“It’s fascinating they found this passport, which by the way there is a duplicate of that passport that was forged by somebody else, someplace else,” he said. “So it appears to not even be a legitimate passport.”

Across Europe, the divide is deepening between those who see the massive migrant flow as a potential security threat that should be shut down, and those who focus on refugees as being the victims of extremism needing protection.

Terrorism experts say ISIS hopes to stir up divisions between mainstream and Islamic communities, and provoke a backlash against Muslims that would then fuel their radicalization. And in some cases, Europeans previously inclined to help the refugees are changing their minds.

In Poland, the town of Szamocin, which had defied an anti-migrant mood across the country and called on Syrian refugees to settle there, has now retracted the invitation.

“Despite our sympathy for Syrian refugees, we cannot exclude that among them there will be terrorists,” Mayor Eugeniusz Kucner said on his town’s website. He said his priority must be to “ensure peace and security.”

A new anti-migrant government in Poland, which took office this week, is also deeply unhappy about the previous government’s decision to accept 7,000 refugees as part of a European plan. New government members vow that asylum applications will be scrutinized carefully and that they will be quick to reject any applicants who are even slightly suspicious.

“Terrorists are deliberately and systematically exploiting mass migration in order to blend in among masses of people who are leaving their homes in the hope of a better life,” Orban said.