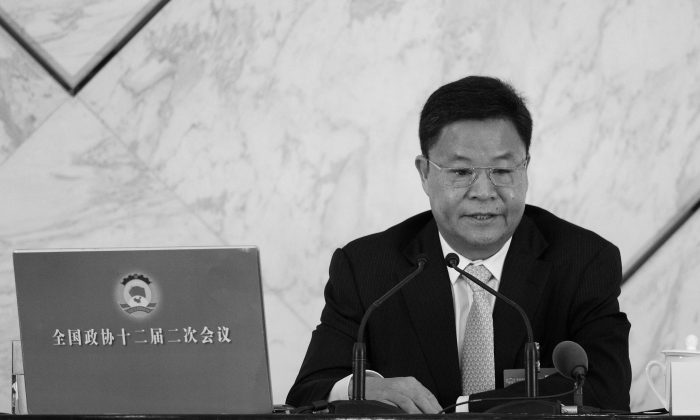 Lü Xinhua, an official spokesman, attends a press conference at the Great Hall of the People in Beijing on March 2, 2014. Lü all but acknowledged that Zhou Yongkang, the former security czar, is in trouble. (Wang Zhao/AFP/Getty Images)
China

The Chinese Communist Party twice in the last 24 hours came tantalizingly close to just coming out and saying what everyone already thinks they know: that the regime’s former security czar, Zhou Yongkang, is being taken down in a political purge.

At least, that was the almost unequivocal message to arise from an amusing question-and-answer between a reporter and an official spokesperson on Saturday.

Lü Xinhua, the spokesman for the Chinese People’s Political Consultative Conference, an official advisory body, responded to a question from a reporter with the Hong Kong-based South China Morning Post in a way that all but confirmed that Zhou will be punished.

The journalist asked: “We’ve noted many foreign media have reported news and information about the former Politburo Standing Committee member Zhou Yongkang. I wonder whether the speaker can reveal the situation, to dispel the misgivings of the outside world?”

When the question was translated in the press hall, laughter could be heard. Lü visibly chuckled, before giving a stern statement on the matter.

“Let me put it this way,” he said. “Last year the Central Committee for Discipline Inspection investigated 31 individuals for violating the law and violating Party discipline. Everyone knows that among them are those at the ministerial level… including high-level officials who had serious disciplinary problems.”

The euphemistic reference to “discipline” typically means corruption, but is also a convenient catch-all phrase deployed when top Party officials wish to dispose of their political opponents.

He added: “We say to the Party and society: ‘No matter who you are or how high your position is, as long as you have violated Party discipline and the law, you will suffer serious investigation and severe punishment.’ This is not empty talk.”

Lü’s conclusion, though, was the part that left no doubt in anyone’s mind. “I can only answer you in this fashion,” he told the reporter. “You know what I’m talking about.” He then chuckled knowingly, and loud laughter from the crowd ensued.

In other words: Zhou Yongkang is in deep trouble, according to how the remarks were widely interpreted.

If charges are indeed made public against Zhou Yongkang, about which speculation has swirled for almost two years, it would constitute one of the highest-reaching purges of its kind in the Party for decades.

Zhou is a target for Xi Jinping partly because of his deep ties with the purged former Politburo member Bo Xilai. Bo was widely assumed to take over Zhou Yongkang’s post as security boss, and the two are also said to have plotted a political coup to weaken and then replace Xi Jinping. Political analysts think that Xi must strike down Zhou, or else be perceived as a weak leader.

The spokesperson’s remarks were followed on Saturday with the appearance on an apparently semi-official website, www.lianzheng.org (meaning “clean government” in Chinese), that Party Central had decided, after investigating Zhou’s extensive list of crimes, to expel him from the Communist Party.

He was said to have embezzled vast sums of money throughout his career, in the petroleum sector, in Sichuan Province, and as head of the security apparatus. He “abused his authority, committed grave mistakes, and carries great responsibility,” the notice said. He stole money from the state and enriched his family. He engaged in unsavory sexual relationships with many women. He conspired with criminal gangs to commit crimes. “Zhou Yongkang’s activities created serious consequences, caused extreme damage to the reputation of the Party and the country, and had vile effects inside and outside the country.”

Zhou’s downfall will only be truly official when it appears in Xinhua and People’s Daily, the Party’s mouthpieces. But at this point observers have been left in little doubt.