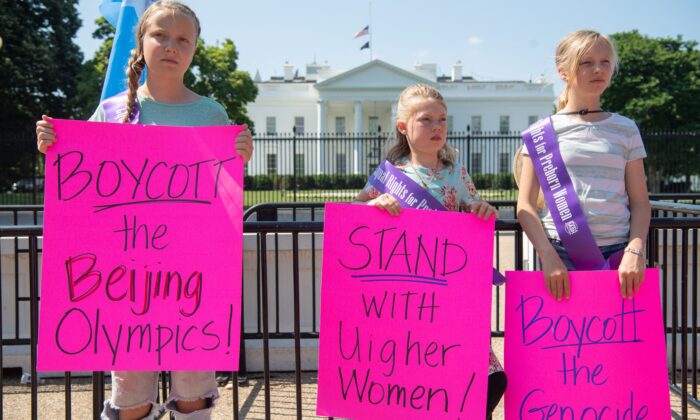 Young demonstrators with the group Stanton Public Policy Center's Purple Sash Revolution hold a rally in support of Uyghur women and call to boycott the 2022 Olympic Games in Beijing during a protest at Lafayette Park outside the White House in Washington, on May 27, 2021. (Saul Loeb/AFP via Getty Images)

The Czech Senate has passed a motion saying that the Chinese regime’s treatment of Uyghurs and other Muslim minorities amounts to crimes against humanity and genocide. On Tuesday, the Belgian parliament passed a similar motion.

The Czech motion was passed unanimously by a vote of 38 to zero on June 10, according to a June 14 statement from the Inter-Parliamentary Alliance on China (IPAC), an international cross-party group of legislators.

The motion noted that “there are massive violations of human rights and freedoms, genocide and crimes against humanity, ethnic discrimination, and the suppression of cultural, religious and political identity in the PRC [People’s Republic of China],” in particular in China’s far-western region of Xinjiang.

“We cannot stay silent while the Chinese Government carries out the most brutal persecution of Uyghurs, Tibetans, and other groups,” said Czech Senator Pavel Fischer, according to the statement. Fischer is an IPAC co-chair.

On June 15, the Belgium parliament passed a motion declaring that Uyghurs face “serious risk” of genocide while saying that they are victims of China’s crimes against humanity.

“Today the Belgian Parliament has raised a warning sign to the world,” stated Samuel Cogoalati, a Belgium MP and an IPAC co-chair, according to a statement. “There can be no ‘business as usual’ with China while the Uyghur prison camps stay open.”

The Chinese Communist Party (CCP) is waging a broad campaign of suppression against Uyghurs and other ethnic minorities in Xinjiang. They are subjected to detention, forced labor, torture, forced abortion, and forced sterilization, in a crackdown that sees over one million Uyghurs being detained inside internment camps.

The Czech motion also called on the Czech government to “reject the invitation to participate” in the 2022 Winter Olympics at China’s capital Beijing, saying that sending athletes to China to compete could be “misused [by China] to legitimize further discrimination, violence, and suppression of fundamental rights.”

“I hope that all democratic states will use the Beijing Winter Olympics to signal the strength of our horror at what is taking place in the Uyghur and Tibetan Regions. This isn’t about petty politics. This is about preventing an industrial scale atrocity. Any political leaders that accept invitations to the games risk tacitly condoning these abuses,” Fischer added.

In early June, lawmakers from the United States, the Czech Republic, the European Union, and eight other countries, announced their coordinated efforts to boycott the 2022 Games due to China’s widespread human rights abuses.

In the United States, both Democrats and Republicans in Congress have also been vocal about an Olympic boycott.

Washington-based nonprofit Campaign for Uyghurs (CFU) welcomed the passage of the Czech Senate’s motion in a press release.

“This is a clear sign of shifting tides against the CCP’s authoritarianism and a recognition that the regime has been allowed to operate with impunity for too long,” stated Rushan Abbas, CFU’s founder and executive director.

She added: “I urge the international community to boycott the Beijing 2022 Olympics and for more western governments to recognize the atrocities taking place against the Uyghurs in East Turkistan today.”

The World Uyghur Congress (WUC), a Munich-based advocacy group, issued a press release to welcome the move by the Belgium parliament.

“It is imperative that other countries in the European Union, as well as the EU institutions themselves, follow suit and take a firm stance against China’s atrocities and recognize them for what they are: a genocide,” stated WUC President Dolkun Isa.