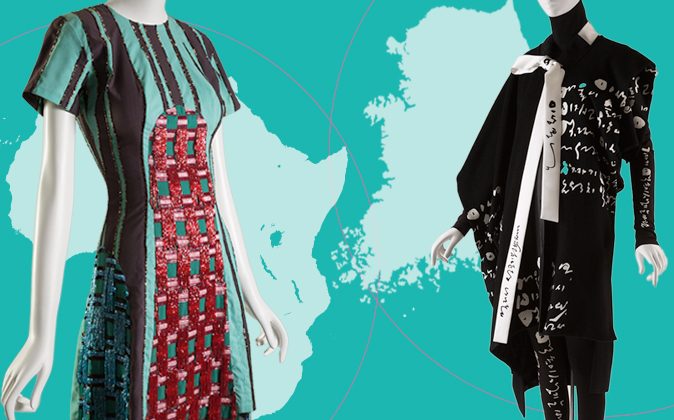 Fashion Week is an exciting time for cities. Hundreds of thousands of the world’s most stylish people and industry leaders fly in to see fresh designs paraded down the runway. When we think of fashion week, the Big Four fashion capitals inevitably come to mind: New York, Paris, London, and Milan.

Some of us might even think of Tokyo, Stockholm, and Copenhagen. But did you know that the city of Lagos in Nigeria also has its own fashion week? Indeed, Lagos as well as another dozen cities around the world are developing a solid local fashion industry complete with their own fashion weeks.

“Throughout fashion history, it’s had a very global presence, [with] a lot of the designers moving around, and what’s interesting is that now we have a lot of the designers staying in their home fashion cities and starting to work from there,” said Ariele Elia, co-curator of a new exhibition at the Museum at the Fashion Institute of Technology (FIT) in New York.

The exhibition, titled “Global Fashion Capitals,” explores emerging fashion hubs around the world and the designers that represent them. It showcases more than 70 garments crafted by various designers from 23 cities.

“One, they had to have a strong international presence; two, they had to be based in their city; and three, [they are] creating more of a modern fashion piece as opposed to traditional piece of dress,” said Elia about the selection requirements for designers. “We acquired about 25 brand new pieces for the exhibition.”

Making ‘Made in Thailand’ Fashionable

Perhaps the most interesting part of the exhibition is the exposure given to designers based outside of Europe. Many of these designers received training in Europe or borrow from European aesthetics, but they also incorporate traditional, local elements into their designs.

“You really have to merge the local with the global, because that’s what creates a fashion identity,” said Elia. “You really have to create something that identifies with your city, because then otherwise you’re just copying fashion, you’re copying the main trends. So it is interesting to see all the different ways the designers are creating their own aesthetic, coming and representing their city.”

Among these fashion newcomers is Lisa Folawiyo from Lagos, whose colorfully beaded dress is the signature piece of the exhibition. Her designs are not only stunning but also ethically produced. Staying true to her roots, she incorporates traditional Ankara (African print) fabrics in her designs. After showing her collection at the Vogue Talent Exhibition in Milan in 2013, she presented her Spring 2015 looks back home in Lagos, winning acclaim from Women’s Wear Daily and Vogue.

Mexico City is represented by designer Carla Fernández and her locally inspired suit. The purple suede appliqué used in the design is based on the Aztec patterning on a Mexican cowboy (charro) costume. The ammunition belt represents the Mexican Revolution. Fernández works with indigenous Mexican tribes in her workshop and incorporates their artistry into her designs.

From Seoul, there is designer Lei Sang Bong, who gained international recognition for his ensemble that incorporated Hangul (Korean Script) motifs.

Tokyo is a notable city that is considered to be the “fifth fashion” capital. More established than other emerging cities, Tokyo-based designers such as Yohji Yamamoto and Rei Kawakubo of Comme des Garçons are already well known across the globe.

“What we see in a lot of these cities is that they take their local culture, whether that’s just a very specific thing, like a fabric or a motif, or just an idea of their culture,” said co-curator Elizabeth Way. “We see that with Ma Shama in Shanghai. She talks about how the philosophy of Chinese culture inspires her, but it’s not something you see in the design. But we see this all over, people drawing from their local culture and making it global.”

In Europe, there is a higher concentration of fashion capitals, and even the newer ones are quite established, such as Stockholm, Copenhagen, Antwerp, Moscow, and Madrid. Antwerp is the only city featured that does not have its own fashion week, but fully makes up for it with Antwerp’s Royal Academy of Fine Arts, alma mater to some of the world’s finest designers such as Dries Van Noten. While not being historical fashion capitals, these cities still have a vibrant fashion scene and the designers are quickly gaining international prominence. One such designer is Ágatha Ruiz de la Prada from Madrid, whose extravagant yellow polka dot gown is on display. Not only is she well known back home in Spain, she also has a shop in TriBeCa, New York, as well as one in Paris and in Milan.

“I think a lot of the emerging fashion capitals are starting to influence the established ones and almost pushing the level of creativity,” said Elia. “You can no longer sit on your laurels—you really have to create really innovative pieces.”

While it is interesting to examine the rise of these new fashion capitals, the Big Four can be credited with sparking international interest in fashion. The exhibition gives due respect by opening with the established fashion capitals and their irreplaceable contribution to the fashion world.

From Paris there is an iconic knit suit by Gabrielle “Coco” Chanel that defines both elegance and comfort. Next to that is a dark navy chiffon evening dress by Christian Dior in a fit and flare 1950s silhouette and a green cocktail dress by Cristóbal Balenciaga, a Spanish-born designer who relocated to Paris. More recent pieces include designs from Yang Li, a Beijing-born designer who moved to Paris, and brand new couturier Bouchra Jarrar.

An equally large section is dedicated to New York, with vintage designs from Nettie Rosenstein, Halston, Ralph Lauren, and Donna Karen. These designers are credited with bringing American fashion to an international audience. There are also contemporary pieces by Proenza Schouler and Alexander Wang.

Although we associate Italian fashion with Milan, which is famous for luxury ready-to-wear and colorful fabrics, the exhibition also displays designs from Rome and Florence, where Italian fashion first began. There’s a signature bright-colored dress from Pucci, a beautiful couture gown from Fontana, as well as a glamorous red number from Valentino. A new addition is Stella Jean, a Haitian-born Roman designer.

There are a number of factors that contribute to a city becoming a global fashion capital including economic conditions, government support, and press interest. In Paris, for example, designers, manufacturers, and artisans worked together with journalists, retailers, stylists and models, educators, and photographers to create the “mystique” of Parisian fashion.

New York solidified its position as a fashion authority by establishing New York Fashion Week and fashion schools such as the Fashion Institute of Technology. In addition, New York-based publications such as Vogue and Harper’s Bazaar focused on fashion from New York, generating public interest.

The development of Milan as a fashion capital had a lot to do with the Italian government recognizing fashion as a vital industry and investing in it. Once overshadowed by Florence and Rome, Milan was able to rise to prominence because of its large manufacturing industry and international airport, which made it an ideal location for holding fashion week. London became internationally known for fashion in the 1960s when small, independent and innovative labels came on the scene.

These factors are equally important to emerging fashion capitals today.

“There’s a lot of things that go into it,” explained Way. “Economics is one. A lot of cities have a manufacturing base, although not all of them do. You have to have schools, you have to have designers that can find the fabrics, can find the manufacturers, can find the buyers. A lot of it has to do with the consumers. Again using China as an example; when the economy opened up, international fashion was very popular. But now Chinese consumers are looking for something more individual, something that speaks to them specifically, and so we see that going on with a lot of the cities. Even though there are talented designers on every corner of the earth, you have to have a lot of things going on in the city to make it rise.”

The exhibition will be on display until November 14, 2015. It introduces many designers that have never been featured in an American museum before.

“There hasn’t actually ever been an exhibition nor a book to look at all these fashion cities together,” said Elia. “There has been different books on Paris fashion, on London fashion, but they’ve never been brought together in one room. We really wanted to show that there is this very modern fashion that’s created in many cities around the globe and that fashion is truly a global industry. We can no longer just look at the four established capitals; we have to look at all of them internationally and to really see how they’re influencing each other.”

“We wanted to expand people’s idea of fashion,” said Way. “It’s not always just the cities you think of. We’re confident that most of these cities are going to become very important in the future.”