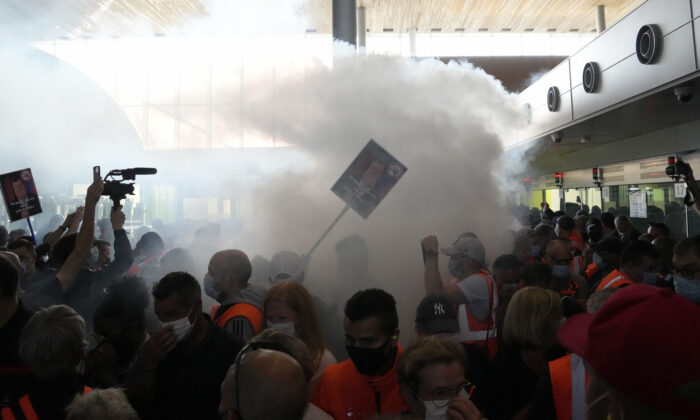 Smoke rises from a flare during scuffles between protesters and French police in front of the passport control of Terminal 2E of Charles de Gaulle Airport in Paris on July 2, 2021. (Thanassis Stavrakis/AP Photo)
By The Associated Press

Police fired pepper spray to try to disperse the protesters at the 2E terminal, primarily used for international travel. An Associated Press reporter at the scene saw passengers wiping their stinging eyes and children frightened.

Banging drums and tooting horns, a few hundred union activists blocked the terminal’s passport control area, causing hundreds of passengers to miss their flights. Riot police with helmets and shields fanned out, and passengers were re-routed to a neighboring terminal.

Unions have been negotiating with Paris airport management over pay cuts linked to the collapse in air travel amid the pandemic. Management of the Paris airport network says revenue was down 80 percent in 2020 and that it is trying to avoid layoffs by trimming pay instead.

Unions announced strikes and protests through Monday, just as many French families leave on summer holidays. The airport warned passengers of possible delays and disruptions to road traffic and check-in procedures throughout the duration of the union action.