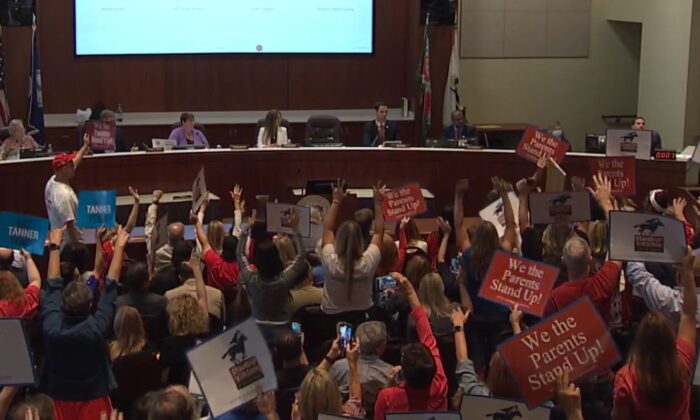 In this file image from video, a Loudoun County School Board meeting is taking place on June 22, 2021. (The Epoch Times via LCPS)
US News

Parents in a Virginia county have urged school board members and the district’s superintendent to step down after an email was published showing that they knew about a sexual assault that took place in May.

“In light of this, what I’m holding, this bombshell email, I respectfully ask that the board resign. You, too, Scott Ziegler,” one parent said during a Loudoun County School Board meeting on Oct. 26.

The board and Superintendent Scott Ziegler knew about a girl being raped by a male in a bathroom at Stone Bridge High School on the same day that the incident took place, according to an email released by the district last week.

Ziegler wrote to the board members on May 28 to tell them that a female student had accused a male of sexually assaulting her in a restroom at the school.

Ziegler claimed at a June 22 board meeting that there were no records of any assaults occurring in restrooms in the district. He was corrected by board member Beth Barts, but she referenced a 2018 incident at Tuscarora High School, not the Stone Bridge assault.

“The entire school board knew that a girl was raped at Stonebridge. That is a fact. Scott Ziegler lied to everyone during the June 22 school board meeting when he said that no assaults happened in LCPS bathrooms. That is also a fact,” one parent said at the meeting, speaking just hours after students walked out of multiple schools to protest against officials.

“You were clearly aware of the sexual assault at Stonebridge, but kept it hidden, denied it, and proceeded to pass your policy,” another parent said. “All of you must go, and we will take back our schools.”

Ziegler said, in a prepared statement read to reporters earlier this month, that he was responding during the June meeting as if it were only about incidents involving transgender or so-called gender-fluid students. The board was debating a policy it later approved that allows students to use bathrooms for the gender they claim to be.

“I regret that my comments were misleading and I apologize for the distress that error caused families. I should have asked board member Barts clarifying questions to get to the root of her question, rather than assuming what she meant. I will do better in the future,” he said.

Neither Ziegler nor the LCPS board members responded to requests for comment by press time.

The male who raped the girl at Stone Bridge has been described by her parents as taking advantage of a permissive environment fostered by school officials regarding sex and gender identity. During a hearing on Oct. 25, a judge heard that the boy was wearing a skirt while raping the girl. The judge found the boy guilty.

The boy remains detained until going before the same judge in November on charges related to an alleged assault that happened at Broad Run High School in early October, prosecutors told media outlets.

John Beatty, one of the board members, joined parents in calling for Ziegler’s resignation, alleging that he withheld information so that the pro-transgender policy would be approved.

“I believe no updates were given because the superintendent was working to aggressively pass a policy that would have allowed unrestricted access of biological males to female restrooms. He didn’t provide information because if it came out that there was an assault in the bathroom, the transgender policy wouldn’t have passed,” Beatty told Fox News in a statement

“I demanded a full investigation. And now our superintendent must resign immediately. Withholding information for political gain is unacceptable and disqualifying.”