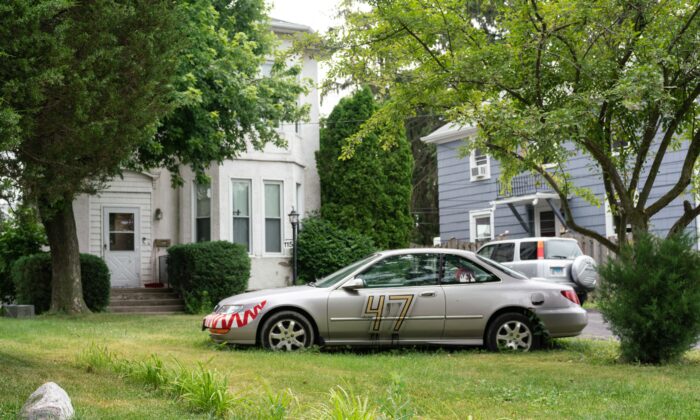 The House where Robert Crimo III lives in Highwood, Ill., on July 5, 2022. (Max Herman/AFP via Getty Images)
US News

The parents of the suspect who police say carried out the mass shooting in Illinois on July 4 have issued a statement for the first time since the attack.

“We are all mothers and fathers, sisters and brothers, and this is a terrible tragedy for many families, the victims, the paradegoers, the community, and our own,” the parents of Robert “Bobby” Crimo III said.

“Our hearts, thoughts, and prayers go out to everybody,” they added.

The brief statement was released by Steve Greenberg, a lawyer who said the parents have hired him to represent them.

Robert Crimo, who lost a Highland Park mayoral bid in 2019, and his wife would like people to “respect their privacy as they try to sort thru this tragedy,” Greenberg said. “The parents share everyone’s desire to figure out everything that went wrong so that this doesn’t happen again, to more innocent people, children, and families,” according to Greenberg, who also said the parents are cooperating with law enforcement.

Crimo III is being represented by two other attorneys, Thomas Durkin and Josh Herman, according to Greenberg. Durkin and Herman did not immediately respond to requests for comment.

Authorities say Crimo III killed seven people and injured others on Independence Day. He allegedly fired a gun from a commercial building into a parade in Highland Park, which is situated near Chicago.

An image from surveillance video showed Crimo III, believed to have planned the attack for weeks, fleeing the scene dressed as a woman, enabling him to reach his mother’s home before taking her vehicle.

Law enforcement officials say the 21-year-old was spotted by a member of the public and alerted the police, who arrested him a day after the shooting.

The motive is not yet apparent, officials told reporters on Tuesday. They also acknowledged that Crimo III was known to police, including an attempted suicide attempt and a warning that the man presented a “clear and present danger” in 2019. But there was not evidence to deny a Firearm Owners Identification Card (FOID) when the suspect applied for one in late 2019, the Illinois State Police said.

Under Illinois state law, a person must have a FOID to obtain a gun.

Greenberg on Wednesday said the police then renewed the card when Crimo III turned 21 “without any involvement from his father.”

He also questioned why police approved the FOID card.

Paul Crimo, Crimo III’s uncle, had previously said that he saw “no signs of trouble” with the younger Crimo. Paul Crimo said he lived in the same house as Crimo III, who was an aspiring rapper and did not have a job.

Some of the videos posted online by Crimo III depicted violence. They were taken down soon after his arrest.