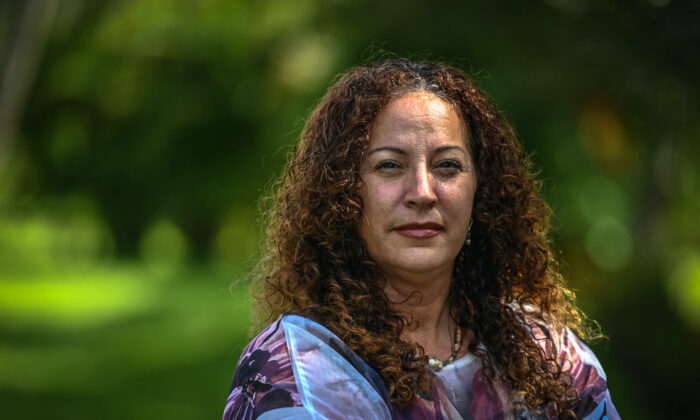 Jacqueline Rosario, a member of the school board for District 2, in Vero Beach, Fla., on Oct. 16, 2022. Rosario’s candidacy for her successful re-election was supported by Moms for Liberty and endorsed by Florida Gov. Ron DeSantis. (Giorgio Viera/AFP via Getty Images)
By Jackson Elliott

While Republicans performed below expectations this election cycle, many school board hopefuls who campaigned on a platform of supporting parental rights triumphed on Nov. 8, even in solid-blue states, Justice told The Epoch Times.

“What you’re seeing now is parents stepping up in their local communities and taking back their education system,” Justice said. “We’re a nonpartisan organization. We want people that support parental rights to win.”

Across the country, Moms for Liberty endorsed 270 candidates.

Defying the odds, more than 50 percent of those candidates challenged incumbents and won, Justice said.

“If you look at the general percentage of first-time candidates that win, it’s much lower than half,” she said.

The win is even more impressive given that the National Education Association (NEA) and the American Federation of Teachers (AFT) spent $59 million on left-wing political campaigns, according to Breitbart.

The Epoch Times reached out to both the NEA and the AFT, but representatives for neither organization responded by press time.

School board candidate and incumbent Jacqueline Rosario ran for office with an endorsement from Florida Gov. Ron DeSantis, a Republican. She and the other five DeSantis-endorsed candidates in the Nov. 8 election won school board seats.

“There’s no place in public schools for ‘woke’ ideology,” Rosario told The Epoch Times. “We need to remain or come back to traditional reading, writing, arithmetic, and science. These are the subjects that we’re responsible for teaching.”

Florida schools must improve education for several reasons, she said. Math scores have dropped, and language scores currently average in the 50th percentile.

But instead of fixing these problems, schools have focused on woke indoctrination.

Referring to DeSantis’s endorsement, she said: “It’s been incredible. It’s honoring, humbling, and exciting all at the same time. The work that I’ve been doing on the board has been exactly what the governor’s educational agenda is written as.”

She advised future candidates that their commitment to parental rights should be genuine.

“It has to be consistent, it has to be genuine, and you have to live it,” she said. “There are parents out there depending on you to be their voice on the school board.”

When COVID-19 moved classrooms into living rooms, it lit the fuse of the parental rights movement, Alvin Lui, president of Courage Is a Habit, told The Epoch Times.

School went home; then parents went to school, he said.

For the first time, parents saw that schools taught kids radical gender ideology, indoctrinated them into activism, and exposed them to pornographic books, he said.

“When kids were home during COVID, a lot of parents saw what they were being taught,” Lui said. “It was the first time that parents got a peek into the classroom.”

In places such as Maine, teachers offered children pornographic books, and schools put up hallway posters that encouraged children into radical gender ideology.

Some children told their parents that they felt pressure from teachers and peers to declare that they were new gender identities. A new education rule in Maine will allow schools to keep secrets from parents about their children.

“Maine’s Department of Education is about to pass a rule that lets school counselors and social workers take children away from their parents,” a Courage Is a Habit video states.

Most school boards have two- to four-year terms, according to Ballotpedia. And 2022 marked the first widespread opportunity for voters to make choices since the COVID-19 lockdowns.

“There was no rallying cry, no overall strategy to have each GOP candidate unify as a team to expose the horrific Maine educational situation, which is indefensible from the Democrats,” he wrote. “That’s why we got crushed.”

A local school district sued McBreairty after, during a school board meeting, he read aloud passages from obscene books found in the school, as previously reported by The Epoch Times. McBreairty eventually won a lawsuit against the school.

The New Jersey Education Association released an election ad opposing parents, Justice noted. It claimed, “When extremists start attacking our schools, that’s not who we are.”

Moms for Liberty hopes that the wave of election wins will lead to increased educational achievement, she said.

“The people in control of education continue to sell snake oil solutions, like DEI and CRT and SEL instead of focusing on the real issue at hand, which is kids are not learning to read in school,” Justice said.