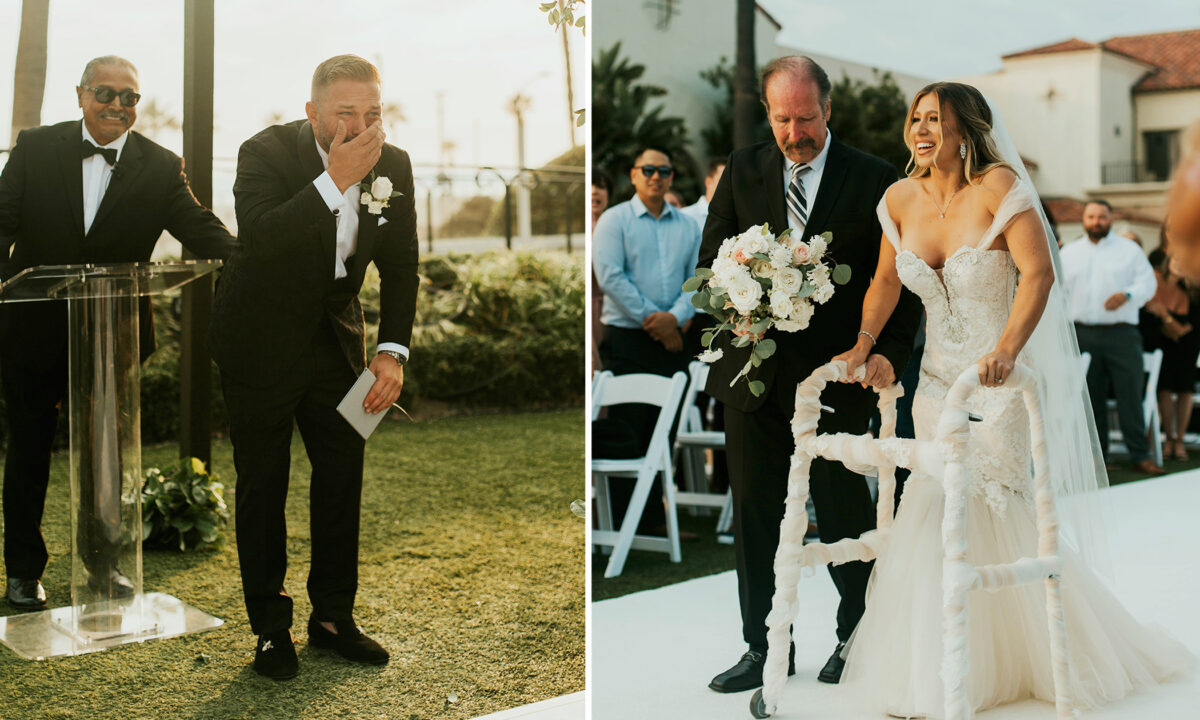 Paralyzed Bride Practices in Secret to Walk Down the Aisle at Wedding, Stunning Her Groom

A bride who’d dreamed of walking down the aisle her whole life was left paralyzed in a car accident as a high school senior, throwing her future into uncertainty. Yet after meeting the man of her dreams, she summoned the strength to practice walking and surprised the groom by meeting him at the altar on her own two feet.

“Jay had absolutely no idea that I was actually planning, our entire relationship, to walk down the aisle,” Chelsie explained to The Epoch Times. “It’s something that I had to hide from him for a very long time … I had to train for it.”

Chelsie, who is a professional dancer, community leader, content creator, and founder/CEO of a wheelchair dance company, was left paralyzed after leaving a senior high school party in 2010 with a driver who had been drinking. The car Chelsie was riding in hit a tree, head-on, at 35 miles per hour. The then-17-year-old lost all movement, feeling, and function below her level of injury and is considered a T10 paraplegic.

Chelsie’s world was rocked after her accident, and the reality of her injury took time to sink in.

“I didn’t really know what had happened to me when I was airlifted to the nearest trauma center,” she recalled. “They performed a seven-and-a-half-hour back surgery on me and fixed my back. Then about two weeks later, the doctor came in and said, ‘Do you have any questions for me?’

However, for the first year after her accident, Chelsie, who has been a dancer since the age of 3, found it hard to believe that she wouldn’t be able to walk. She strongly felt that she was “going to be the miracle that gets up and walks again.”

Nevertheless, staying true to her dream to become a dancer, she founded a Rollettes, a Los Angeles-based wheelchair dance team that’s committed to education, disability representation, and female empowerment. In 2014, Chelsie also began taking able-body dance classes at the top dance studios, learning to adapt the choreography to fit her wheelchair.

But since her injury, Chelsie wondered if she would fall in love again—until she met Jay seven years ago while he was selling a product for which Chelsie was a spokesmodel. They locked eyes from across the room, but didn’t connect until six months later. As they kept in touch with each other, their love blossomed.

Jay then proposed on Chelsie’s 10-year “life day,” a celebration of 10 years since her injury, with a touching video message.

Chelsie said yes to Jay’s proposal, and over a year later, the couple got married in September.

On her big day, Chelsie wore leg braces beneath her dress and held a walker decorated with white fabric to match her dress.

“When I got to the aisle, I got very nervous,” Chelsie recalled. “I remember taking a deep breath … standing there going, ‘Okay, this is it, this is the first moment of the rest of my life.'”

Jay, who had no idea about the surprise, dropped in shock on seeing his bride walk toward him.

Chelsie recalls the struggle of walking on a wet carpet and a moment of exhaustion halfway down the aisle where she wanted to give up, until she saw Jay’s face.

In a film of the wedding produced by The Film Poets, Chelsie meets her groom at the altar and Jay greets her with the words, “You blow me away, every single day.”

With her surprise of walking down the aisle, Chelsie stunned the entire congregation. It was not only Jay who was unaware of her plan, but a lot of their friends and extended family had no idea. Attendees would later tell Chelsie that other hotel guests came onto their balconies to watch as she walked down the aisle.

For the bride, the surprise was surely a labor of love.

“I trained with my personal trainer at a regular gym for about six months beforehand, to just get more comfortable when it comes to being in the upright position,” she told The Epoch Times. “When I take steps, I don’t know where my legs are; I can’t feel them. So I had to practice not looking down the entire time.”

The surprises that day didn’t just end with Chelsie’s walk. She stood for hers and Jay’s first dance; performed a special choreographed father-daughter dance with her dad, who has always been her rock; and even did a surprise performance for Jay.

Since marrying in September, the couple is now looking forward to starting a family. Chelsie says that Jay is “going to be the most amazing father,” and that she is “really excited to be a mom with a disability” as she, with Jay’s support, will be able to give their children a different perspective on life.

In the meantime, she and Jay love to travel—the U.S. is “very accessible,” she says, and imposes few physical limitations. Apart from traveling, Chelsie also loves to cook dinners, and the couple loves dancing in the kitchen.

Chelsie also shared her advice with those who are in a similar condition and want to get married.

“I want to make sure that people know that if you have a disability, you don’t have to walk down the aisle to have a beautiful wedding,” she explained. “That was an important thing for me, but every bride and every groom is going to be different … figure out what’s most important to you, and then go from there!”

Watch the film of Chelsie and Jay’s beautiful wedding ceremony in full, below: