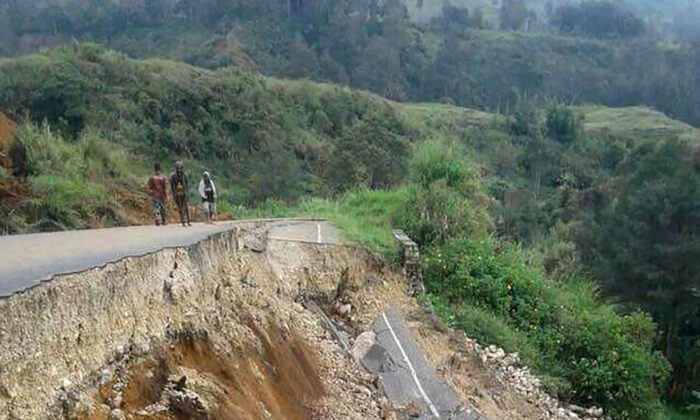 According to the United States Geological Survey (USGS), normal faulting occurred at a depth of approximately 90 kilometres (56 miles) beneath eastern PNG, near the northern edge of the Australian plate.

A local member of parliament Kessy Sawang told AFP that at least two people had died in remote villages, while Koranga Alluvial Mining said three miners had been buried alive.

The United Nations Country Team in PNG (UNCT PNG) said at least four deaths were due to being buried in landslides.

Around 480 kilometres south in Port Moresby, the nation’s capital, moderate to severe shaking was felt for over a minute.

“National and provincial disaster agencies, as well as leaders, have been asked to assess the damage and injuries to people and attend to these as soon as possible,” Marape said.

However, the full extent of the damage and number of casualties is still unclear.

The earthquake epicentre struck near remote towns, where there are limited communications and few paved roads.

UNCT PNG reported injuries from falling structures or debris, with some damage to health centres, homes, roads, and highways.

A tsunami warning was issued by USGS, but was shortly lifted after the threat had passed.

PNG experiences high levels of seismic activity due to its location on the Pacific ring of fire.

In the last 50 years, 78 earthquakes of magnitude six or higher have occurred within 250 kilometres of the latest event.

According to USGS, at the location of the earthquake, the Australian plate is moving towards the Pacific plate at a velocity of about 100 millimetres per year (4 inches).

“Earthquakes in this geographical region are generally associated with the large-scale convergence of these two major plates and with the complex interactions of several associated microplates,” it said.