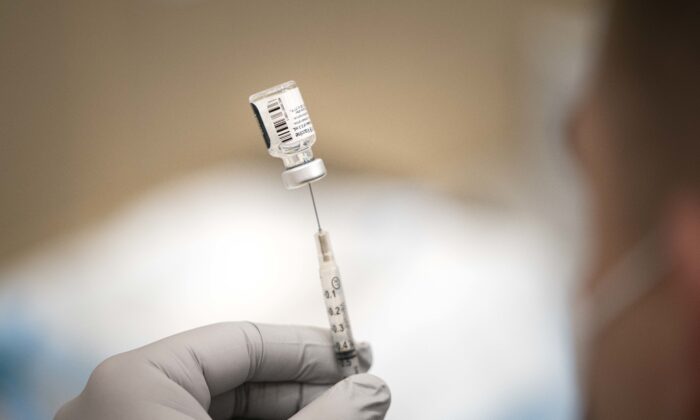 A Navy member prepares a COVID-19 vaccine dose at a vaccination site in a file image. (DOD)
US News

A Navy officer who refused to get a COVID-19 vaccine is not getting separated from the force, an administrative board recently ruled.

The board, composed of three officers, found that Lt. Bill Moseley did not commit misconduct by refusing to get the vaccine, according to R. Davis Younts, Moseley’s lawyer. The board also found unanimously that Moseley should be retained in the Navy.

A record of the May 20 hearing is not yet available, but the Navy confirmed that Moseley is not being removed.

“The Navy can confirm a board of inquiry occurred for Lt. Bill Moseley and that he was retained in the Navy. The Navy does not comment on the specifics of administrative actions,” a Navy spokeswoman told The Epoch Times in an email.

The Epoch Times has filed Freedom of Information Act requests for audio of the hearing and the verdict.

Defense Secretary Lloyd Austin, a Biden appointee, ordered all military personnel in August 2021 to get a COVID-19 vaccine. He said the move was done to make sure military readiness was maintained during the pandemic.

Each member had the option of submitting requests for accommodation, but many requests were rejected, including the vast majority of those submitted on religious grounds.

Moseley opposes getting a COVID-19 vaccine for religious reasons but ultimately opted not to file a request for a religious exemption because he became convinced that the request was going to be denied, regardless of how legitimate it was, Younts told The Epoch Times.

Moseley also felt he had an obligation as an officer “to object to the lawfulness” of Austin’s order.

Underpinning the challenge to the order was the fact that the approved versions of the COVID-19 vaccines remain largely or completely unavailable in the United States. The two most administered shots, from Pfizer and Moderna, were first cleared under emergency use authorization by the U.S. Food and Drug Administration (FDA) in late 2020.

Moseley spent time buttressing his case by going to three separate Navy facilities to see if they had the versions of the vaccines marked Comirnaty (Pfizer) or Spikevax (Moderna) but found each time that they weren’t available, Younts said.

“He was able to document that which I think was very important, because many, many people, including people in the military, just don’t understand the distinction between an emergency use authorization product and what’s actually FDA approved,” he said.

Queries to states by The Epoch Times have repeatedly shown that few, if any, vaccines produced after approval are available. The FDA has declined comment, and the companies have said that existing product will be used until it is no longer available.

Federal law says that products granted emergency authorization cannot be mandated for the military unless the president “determines, in writing, that complying with such requirement is not in the interests of national security.” Neither President Donald Trump nor President Joe Biden has made such a determination.

Moseley submitted a copy of that law and several other exhibits to the board supporting his position that it is legally impossible to comply with the mandate, according to documents reviewed by The Epoch Times.

The Navy board largely agreed, and Moseley, who enlisted in 2000, can now remain with the force until he retires.

Nearly 900 Navy members have been discharged for refusing a COVID-19 vaccine as of mid-May.

Moseley’s case could affect future ones, depending on who you ask.

“The board looked at all the facts, all the information, all the evidence, and they found that refusing the COVID vaccine was was not misconduct, because they were not convinced it was a lawful order,” Younts said. “It’s not binding on any other case, but it does send a strong strong message that if military members get a fair shake—you have a fair and impartial board—this is going to be the outcome.”