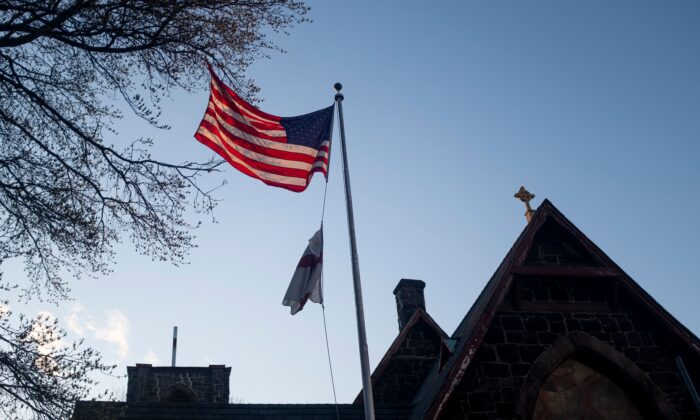 A U.S. flag is lit by the setting sun in front of the Church of the Redeemer next to the Mount Sinai Hospital in Queens, New York City, on April 15, 2020. The CCP virus pandemic is likely to have a "profound and pervasive impact" on global mental health as billions struggle to cope with isolated living and anxiety spikes, experts warned. (Johannes Eisele/AFP/AFP via Getty Images)
By Bowen Xiao

A basket of worries—spurred by anxieties related to job security, financial instability, grief from death, or loneliness—are plaguing an increasing number of Americans living amid the COVID-19 pandemic and its shutdown measures.

Dr. Carla Marie Manly, a clinical psychologist who specializes in stress and anxiety, has noticed “a huge surge in depression, suicidality, and anxiety during the pandemic,” she told The Epoch Times. Manly has participated in a number of programs to help those affected, including virtual group sessions, free mental health videos, and individual therapy work.

Just over 10 percent of adults reported seriously considering suicide in the previous 30 days before June, the CDC said, approximately twice the number reported in 2018.

A growing number of tragedies, coupled with the uncertainty of the CCP (Chinese Communist Party) virus, is spurring a similar mindset to a restless period that occurred after 9/11, according to Carole Lieberman, a doctor, psychiatrist, and author.

She also warned about the negative effects of a fearmongering media.

“We’ve heard about the horrible, lonely deaths that patients with COVID-19 suffer because they’re in quarantine,” Lieberman told The Epoch Times. “Forced isolation through stay-at-home mandates can cause many physical and psychological problems including anxiety, depression, and suicide.”

Lockdown restrictions and the pandemic itself are taking a severe mental toll on many, something that needs to be addressed and prepared for, mental health experts say.

It should “absolutely” be treated as a national health crisis, according to Nicole Avena, assistant professor of neuroscience at Mount Sinai School of Medicine in New York City and a visiting professor of health psychology at Princeton University.

While some are handling the pressures well and making the best of the time to be with their families, many have turned to unhealthy coping methods such as alcohol or overeating, she said. Other factors, such as children not being able to attend school, could also be affecting well-being.

“People are worried about a possible second wave of the virus, but I can guarantee we will have a second wave of mental health crisis, which is already unfolding with increased suicides, drug overdoses, and alcohol use,” Avena said.

According to the CDC report, more than 13 percent said they had begun or increased the use of substances to cope with stress related to COVID-19. Substance use was defined as the use of alcohol, legal or illegal drugs, or prescription drugs taken in a way not recommended by a person’s doctor.

“I think we need to be a little more realistic about the situation that has unfolded in terms of how it is impacting mental health,” Avena said. “Mental health is often an invisible condition, and we are treating it like it doesn’t exist amid this pandemic—and that isn’t right.”

One couple based in Los Angeles said their lives were turned upside down due to the pandemic and almost tore their relationship apart.

Their families live on either side of the country. With no one else for company except each other, they began “driving each other insane” and “things started falling apart,” Mikayla Wilkens told The Epoch Times. Pre-pandemic, the pair often traveled for modeling work.

“In June, we were engaged and on the verge of splitting completely,” she said. “The pandemic took a toll on both of us.”

With no set schedule, and stuck in the house, Wilkens’s mental health declined to the point where she checked into a 45-day treatment program in mid-June, giving her and her husband some needed time apart. Her husband also started therapy.

After receiving help, they bounced back stronger than ever, Wilkens said.

After the programs, they were able “to teach each other new things and help one another through our bad days,” she said. They made their relationship more of a priority as well.

“We run numerous businesses together, and I personally am a workaholic. … So every day, we put our phones away at a certain time and spend quality time together cooking, playing a game, going out in nature around our house, reading books together, et cetera,” Wilkens said.

“This has completely transformed our relationship.”

While there has been a rise in demand in recent years for different behavioral services, in part due to greater awareness surrounding the importance of mental health, the pandemic has highlighted the need to make mental health a national priority, experts said.

“We work with 2-1-1 hotlines across the country and they have told us that the pandemic has doubled or even tripled the number of mental health support requests they are fielding,” Ted Quinn, CEO and founder of Activate Care, told The Epoch Times.

“This is now an epidemic within a pandemic,” he added.

An accredited online pharmacy, meanwhile, has seen a rise in people ordering sleep prescriptions, a bump that is most likely due “to an increase in cases of pandemic-induced insomnia,” Jessica Nouhavandi, lead pharmacist, co-founder, and co-CEO of Honeybee Health, told The Epoch Times.

“It is our understanding that sleep medications and sleep problems are closely linked to mental health.”

New York-based psychiatrist Dr. Zlatin Ivanov has witnessed firsthand a recent spike in clients suffering from anxiety, noting that “cases of depression went through the roof.”

Ivanov says many are struggling from missing out on their daily routines and other small pleasures. While medical professionals agree that social distancing is crucial for mitigating the spread of COVID-19, “the psychiatrists are well aware of the psychological impact this will have on a person’s life,” he told The Epoch Times.

A person is considered to be experiencing a mental health issue when they struggle with day-to-day life, according to Ivanov. People often come to him because they don’t feel like themselves, get angry easily, lack energy, feel restless, can’t sleep, or experience panic attacks out of the blue.

Treatments are always defined by the personality, background, and personal circumstances of each person, he added.

For couples facing problems brought on or worsened by the pandemic, Wilkens said they should try to remember they aren’t alone in experiencing difficulties and should set aside time to reconnect with each other.

Wilkens said that people shouldn’t stay silent about their struggles and should reach out for professional help if needed. Everyone also needs healthy ways of releasing negative emotions, such as meditation or yoga.

“Emotions are not facts, and they do not last forever,” she said. “I think, overall, this pandemic saved our relationship, and we are more happy together than ever before.”

If you or someone you know in the United States is considering suicide, please contact the National Suicide Prevention Lifeline at 1-800-273-TALK (8255), text “home” to the Crisis Text Line at 741-741 or go to suicidepreventionlifeline.org.