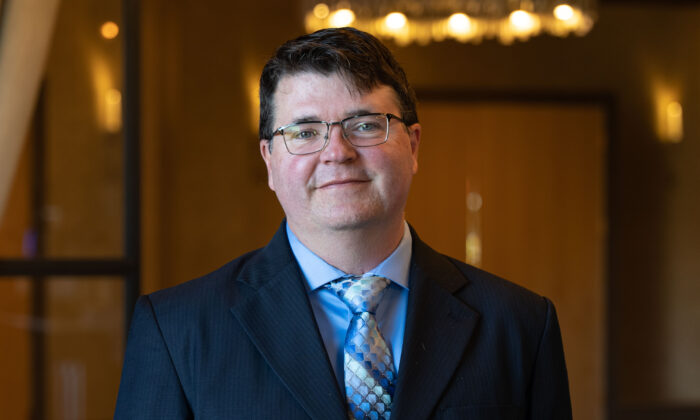 Dr. Steven Templeton, an Associate Professor of Microbiology and Immunology at the Indiana University School of Medicine, attends the inaugural conference of the Brownstone Institute in Hartford, Conn. on Nov. 13, 2021. (York Du/The Epoch Times)
Expert View

Lockdowns, school closures, universal masking, vaccine mandates; these responses to COVID-19 are “self-destructive” and more politicized than scientific, according to immunologist Steven Templeton.

Templeton once worked for the Centers for Disease Control and Prevention (CDC) for four years. Now he’s an associate professor of Microbiology and Immunology at Indiana University. At the inaugural Brownstone Institute conference on Nov. 13, he shared his views with EpochTV’s “American Thought Leaders” on why he has been critical of governments’ responses to COVID-19. The full interview will be premiere on EpochTV in coming weeks.

“When it comes to the point of certain interventions that are sort of weakly supported, and if you go back and look at everything that was published before 2020, and come to this completely different conclusion if you read the things that published later on in 2020, about masks or the ability of lockdowns to stop and end spread indefinitely—long term lockdowns that having devastating collateral damage—and that type of thing. And then you realize how politicized this really has become,” Templeton said.

Templeton said that before 2020, it’s wasn’t controversial that respiratory diseases like COVID-19 could not be completely managed or stopped.

But after 2020, leaders tend to blame the public for the spread of the virus, saying the “pandemic could be contained if we just did the right things and listen to the experts,” Templeton said.

“The problem is, it’s not sustainable,” Templeton said, referring to lockdowns. “It’s not something that everyone can do because some people have jobs where they have to interact with others.”

Templeton likened the pandemic response to an autoimmune disease in a person.

“You want to have a balanced response to infectious disease, but you don’t want to go too far because if you get too far, you start destroying your tissues,” Templeton said. “And I feel as if that’s very analogous to how we handled the pandemic response in a way that was self-destructive.”

“You don’t hear politicians say, when there’s a hurricane, we all work together, we can solve this hurricane,” Templeton continued. “Yes, you have to make sure that the damage isn’t as bad as it could be. But it’s just something that has to be survived and endured. And I believe that was the case here.”

Templeton said he supports targeted interventions for vulnerable people, such as increasing ventilation because the CCP (Chinese Communist Party) virus is an airborne virus. But the universal application is not necessary.

Vaccines are also very important for vulnerable populations since they seem to limit disease severity, but the whole efficacy of the vaccine is unknown because there’s a lot of mixed data, Templeton continued.

“So it doesn’t have this sterilizing effect that people expected,” Templeton said. “The mandates are obviously something that’s controversial, as I believe a lot of scientists don’t believe that these things should be mandated, especially for children.”

“To me, these are political questions, not necessarily scientific. Scientists are human too. So we get involved in politics, and everything we do is affected by that.”

As an immunologist, Templeton said it’s a difficult question to compare natural immunity and vaccine immunity because researchers are still assessing how long-term immunity develops.

“I do know, generally, natural immunity is durable for several reasons,” Templeton said, adding that one of the reasons is the route of infection.

“The route that would provide the most protection against the reinfection—that’s a direct introduction of a virus into the lungs—you have a local response, and there are tissue-specific immune responses that you don’t necessarily get when you inject a vaccine into somebody’s arm,” Templeton said.

He said this was not controversial before 2020, and that’s why scientists have been trying to develop inhalable vaccines for respiratory viruses, such as a mist vaccine for flu.

“The other problem is that viral infections tend to leave kind of what we call an antigen reservoir,” Templeton said, referring to people who test positive after a very long time, even though they’re not symptomatic and they couldn’t transmit to other people. “That signifies that there is some sort of activity that may be stimulating the immune response to develop a strong memory. You just don’t get that with the vaccine.”

In one of his articles, Templeton also detailed two other differences between natural immunity and immunity acquired through vaccination.

Most COVID-19 vaccines only stimulate immunity against the spike protein, while natural immunity could recognize all parts of the virus, he pointed out.

Another difference is, vaccines, unlike infection, could not stimulate stronger immune responses inside and outside of cells, thus limiting the strength and durability of downstream immunity. That’s why a second dose and a booster are introduced to overcome this.

“Both immunity to vaccination and infection protect against severe disease, but the scope of immunity that develops after infection is broader, generally more durable, and more specific to lung reinfection,” Templeton wrote, “Despite the obvious downsides, misinformation about the inferiority of natural immunity to vaccination persists, likely out of fear that data showing long-lasting protective immunity from infection will promote vaccine hesitancy.”

However, stronger immunity derived from infection comes with an increased risk of severe disease and a higher incidence of long-term effects, especially in older people and those with comorbidities, Templeton pointed out.

Federal health authorities acknowledge natural immunity exists but have continued to claim that the protection from vaccines is better, pointing to a different set of studies, including one from Kentucky published by state and CDC researchers.

Templeton indicated that media played an important role in contributing to these pandemic responses.

“Talking to people in the community, I got that sense that it’s not that they wanted to dismiss what I was saying, but it was so different from what they were seeing and hearing,” Templeton said. “They just couldn’t really believe it. And it was frustrating.”

Templeton gave an example of a New York Times report.

On July 18, 2020, at a time when schools were deciding how to return to school, the New York Times reported a study from South Korea, claiming children spread the CCP virus as easily as adults.

“Later on, it came out they admitted they could not define what direction transmission was happening within their study, so they had to issue a correction—also the New York Times [did one] a month later,” Templeton said.

But the damage had already been done after this “highly publicized” report and other stories; schools have been closed, people had decided to go remote, Templeton said.

“What I’ve seen in the news media, which was very catastrophic type stuff; I couldn’t believe the level of negativity,” Templeton told “American Thought Leaders,” saying that’s part of the reason he started writing articles.

Templeton has written a series of articles since the pandemic, trying to provide a “different perspective.”

“I didn’t want to look back on this and say that I’ve violated my conscience and didn’t speak up when someone really needed to. And I think I’ll be able to say that, and that’s actually more important than making a difference.”