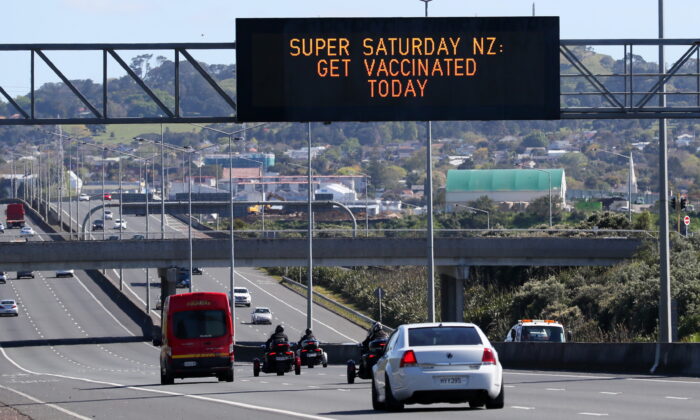 A sign on an Auckland motorway urges people to get vaccinated at a COVID-19 vaccination clinic during a single-day vaccination drive, aimed at significantly increasing the percentage of vaccinated people in the country, in Auckland, New Zealand, on Oct. 16, 2021. (Simon Watts/Reuters)
Viewpoints

Pandemic of the Vaccinated

Today, the branding should read “pandemic of the vaccinated.”

Singapore is one of the most vaccinated countries on earth, with 85 percent of the population fully vaccinated. Singapore has soaring rates of infection—almost four times its highest pre-vaccination rates. Deaths are also soaring, to 12 times their pre-vaccination rates. Six months ago, Bloomberg’s COVID Resilience Ranking scale deemed Singapore “the world’s best place to be during Covid.” Today, after becoming highly vaccinated, Singapore ranks 39th, its lowest ever ranking.

Ireland is even more heavily vaccinated—92 percent of adults and 89 percent of those over 12 years of age have had two jabs, making it the EU’s most vaccinated jurisdiction. Yet despite the ever-increasing numbers who are doubly vaccinated, infections are surging in Ireland, to the highest rate since March. Within Ireland, the city of Waterford, whose over-18 population is 99.7 percent fully vaccinated, has Ireland’s highest rate of infection. Waterford County, which previously had one of Ireland’s lowest rates of infection, now has one of the highest.

Herd immunity based on vaccinations not only has failed to stop the spread, it has also failed to prevent serious outcomes: Of Ireland’s 474 COVID-19 deaths between April and October, 44 percent were fully vaccinated.

Iceland, Ireland’s northern neighbor, declared victory and lifted all domestic restrictions at the end of June when 88 percent of its over-16 population had received either one or two jabs. Starting in July, it entered what has become its longest-lasting and most intense surge of infections—a rollercoaster that dipped in September, only to surge all over again. Iceland’s chief epidemiologist, noting that COVID-19 cases are growing exponentially in Iceland as well as other European countries, now believes that “widespread vaccination … does not seem to be enough to stop the current wave nor to prevent hospitalization of those who are seriously ill.”

New Zealand, where 89 percent have received at least one dose and 77 percent are fully vaccinated, is in the midst of its greatest surge of infections at the same time as it accelerates vaccinations. Australia is experiencing an even greater surge, one more than four times its pre-vaccination infection rate.

England, which has some of the best record-keeping, shows in finer detail the extent to which the pandemic now is of the vaccinated. As seen in Public Health England’s most recent COVID-19 vaccine surveillance report (pdf) covering the four weeks to Oct. 31, those vaccinated had much higher rates of infection than those unvaccinated. Those in their 40s, for example, who were vaccinated had infection rates that were twice as high—2,125 cases of COVID-19 per 100,000 vaccinated population if they had two doses compared to 933 per 100,000 among the unvaccinated. That better-than-2-to-1 ratio also held for those in their 50s, 60s, and 70s. Those in their 30s and over 80, too, had higher infection rates if they had been double dosed, but by less than 2-to-1.

Vaccinations not only fail to stem the pandemic in the most highly vaccinated countries, they fail to do so across the board.

“Increases in COVID-19 are unrelated to levels of vaccination across 68 countries and 2947 counties in the United States,” the title of a study co-authored by a Harvard researcher and published in the European Journal of Epidemiology, found that, if anything, vaccinations lead to the opposite of intended results.

The vaccinated are now in the majority in all countries in the Western world. They own the pandemic.