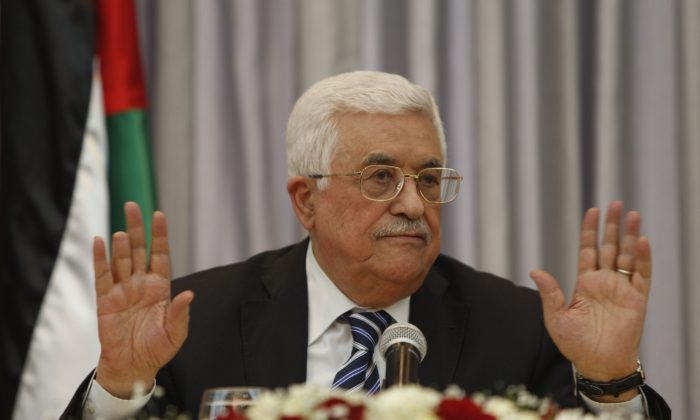 RAMALLAH, West Bank—Unpopular after 11 years in power, Palestinian leader Mahmoud Abbas is starting to face some open machinations from would-be successors, as his dream of negotiating Palestinian statehood lies in tatters.

One likely contender is believed to be behind recent claims—swiftly denied by Abbas’ camp—that the 80-year-old’s health is failing, while another has complained of a “real leadership crisis” in rare open criticism of Abbas from within his Fatah movement.

On Wednesday, Abbas made his first public appearance since the rumors of ill health circulated last week, in an apparent attempt to show he is fine. In a 40-minute televised speech, he hit familiar themes, berating Israel for settlement expansion and dismissing concerns that his self-rule government might collapse under mounting tensions with Israel’s hawkish government.

Despite attempts to reassure the Palestinian public, claims of Abbas’ purported health problems have drawn attention to the lack of a designated successor or a process for picking one. Abbas holds key jobs as PLO chief and president of the Palestinian Authority, but the rift between Fatah in the West Bank and its main rival, the Islamic militant Hamas in Gaza, has prevented timely leadership elections.

Behind the scenes, the battle for succession—likely to be chaotic when the time comes—is intensifying.

“The war of succession has started,” said West Bank analyst Jihad Harb. “Fatah leaders see Abbas as an old man. Each of the potential successors is mobilizing.”

Here is a look at a gallery of aspirants.

Saeb Erekat, 60. The veteran Palestinian negotiator with Israel is seen as Abbas’ closest aide and favored successor, having displayed unwavering loyalty to the Palestinian leader. Late last year, Abbas appointed Erekat as secretary general of the Palestine Liberation Organization, the same position Abbas once used as a springboard for becoming the main candidate in presidential elections following the death of Yasser Arafat in November 2004. Erekat is seen by some in Fatah as an outsider, and polls indicate he would do poorly in elections for president of the Palestinian Authority, the self-rule government set up in the 1990s.

Mohammed Dahlan, 54. Born in a Gaza refugee camp, the charismatic and pragmatic Dahlan was once seen as a promising future leader. He lost political standing after the loss of his native Gaza to Hamas in a 2007 takeover and his falling-out with Abbas in 2010. In exile, Dahlan expanded his business interests and forged close ties with the leaders of Egypt and the United Arab Emirates. He has used money and political clout to shore up support in Gaza, though his influence is weaker in the West Bank. Abbas aides have accused Dahlan of being behind recent claims of Abbas’ ill health, first made on websites linked to the exiled politician. Confidants of Dahlan say he expects to return to the West Bank once Abbas is no longer in office and believes Fatah rivals will be able agree on an interim consensus candidate—such as former Prime Minister Ahmed Qureia—before choosing a real successor.

Jibril Rajoub, 62. The gravelly voiced former West Bank security chief is known for his bluntness and mercurial temper. Rajoub was one of the most powerful men in the West Bank until Israeli troops trashed his security compound during the second Palestinian uprising in 2002. Rajoub has made a comeback, serving as head of the Palestinian Football Federation and rising to the top ranks of Fatah. In comments last week, Rajoub complained of a “real leadership crisis,” though he didn’t refer to Abbas by name. Rajoub said bad decisions have been taken on a series of crucial issues, including the relationship with Hamas and with regional leaders.

Salam Fayyad, 63. Serving as an Abbas-appointed Palestinian prime minister in the West Bank from 2007-2013, the economist won praise from the international community for cleaning up the Palestinian Authority’s finances. At the same time, the political independent has failed to build broad political support at home. Fayyad, who resigned two years ago amid growing disagreements with Abbas and Fatah, made overtures in recent weeks to former nemesis Hamas, an odd alliance that could help him in a leadership bid. In a recent lecture at a Hamas-affiliated think tank in Gaza, Fayyad called for ending the political split quickly, creating a new leadership body that includes Hamas and rebuilding Gaza.

Marwan Barghouti, 56. The Palestinian uprising leader, who is serving multiple life terms in an Israeli prison, is expected to run for president from his cell once Abbas is out of the picture, according to his inner circle. Opinion polls have consistently shown Barghouti to be the most popular Palestinian politician. At a time when two-thirds of Palestinians want Abbas to resign, Barghouti would handily defeat a Hamas challenger, such as former Gaza-based Prime Minister Ismail Haniyeh, in presidential elections. It’s not clear, though, if Palestinians would opt for a leader in an Israeli lock-up if faced with the actual choice.

Ismail Haniyeh, 52. Hamas might sit out presidential elections because of its past experience of being shunned by the international community over its refusal to renounce violence, and might instead settle for serving as kingmaker. If Hamas does compete, a likely candidate would be Haniyeh, a preacher turned politician and one of the most powerful figures in the movement.