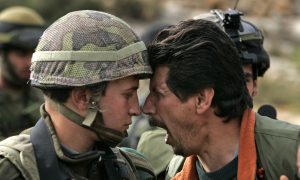 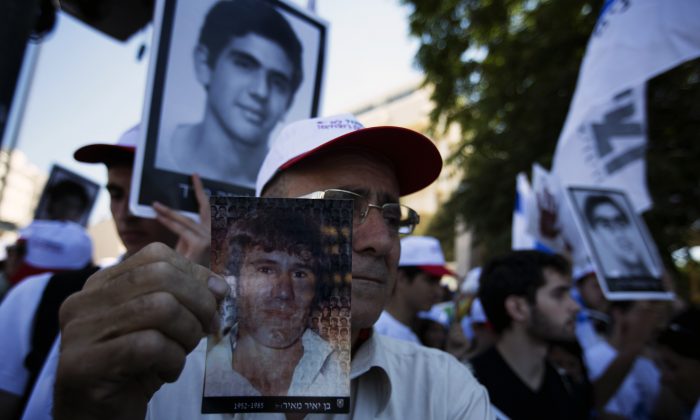 Israelis holding pictures of their loved ones, killed by Palestinians, protest against the planned release of 104 veteran Palestinian and Israeli-Arab prisoners in front of the Prime Minister's office in Jerusalem on July 28, 2013. (Menahem Kahana/AFP/Getty Images)
Middle East

JERUSALEM—Next week, the first of 104 Palestinian prisoners convicted of terrorist crimes whom the Israeli government has decided to pardon will walk free. The Epoch Times spoke with two Israelis who lost family members to Palestinian terrorist attacks to see how they feel about the release.

A Palestinian who was once a prisoner, but who dedicated his life to peace and understanding after he was released, also shared his views.

All 104 prisoners were sentenced before the Oslo Accord of 1993. Most of them have sat in prison for 20 years, but will be released before finishing their entire sentences.

Similar decisions in the past also raised controversy among Israelis.

People react in different ways to the loss of friends and family members, and they have likewise had diverse reactions to the prisoner release.

For some, it brings immense pain to realize their loved ones’ killers will be released. Others take the way of forgiveness and hope peace will be achieved tomorrow with the release of today’s enemies.

Ayelet Harel lost her older brother, Yuval Harel, who was an Israeli soldier during the First Lebanon War in 1982. He was killed at the age of 19 in the Palestinian refugee camp Ein el Hilweh.

Harel said that in order to end the conflict, people may have to let go of the desire to see justice served in every case.

“I’m against people causing bombing attacks and killing, and I do not justify what they did,” she said. But, she later said, “Hate breeds hate; we shall stop hating.”

Harel has joined the Parents Circle Families Forum, a joint Palestinian-Israeli organization of families who have lost loved ones in the conflict.

“In the families forum, Palestinians and Israelis are working to reverse the hostility and the fear,” Harel explained. “At the forum, we try to build trust and understanding between the two peoples.”

Harel supports the release of Palestinian prisoners as a measure to build trust in negotiations. She does not worry the prisoners will be dangerous for the Israeli population after their release.

“We have to demonstrate that reconciliation is possible, like in Ireland and South Africa,” she said. “Each side should recognize the responsibility of its actions and work towards a compromise.”

Father of Girl Killed by Bombing is Against Releases

A 17-year-old Israeli girl named Tal Kerman was killed in a bus bombing in Haifa in 2003. She was an arts student and she loved camels. After her death, a camel she drew but did not color was found in her diary.

Kerman is against next week’s prisoner release. He wrote an open letter to Netanyahu: “Bereaved families will again pay the price. Over the years, we’ve turned into dust, and dust can be brushed away effortlessly.

“We, who paid the terrible price are easily sacrificed and belittled. As if just because the murders happened decades ago, the families have healed … No, Mr. Prime Minister, we haven’t healed. We believed that the justice system would preserve the honor of the dead after the security system failed to keep our loved ones alive.”

Bassam Aramim, a Palestinian from the city of Hebron, was a young member of Fatah, the Movement for the National Liberation of Palestine, which carried out terrorist attacks during the uprising in the West Bank in 1985.

He fought against the Israeli army in 1985 at the age of 17 in the uprising known as the Intifada. He was sentenced by an Israeli martial court to seven years in prison.

After the Oslo Accord in 1993, Aramim was released from jail.

“There was a great feeling of hope for a two-state solution,” he said. “But it never happened.”

He referred to the release last year of more than a thousand Palestinian prisoners in exchange for the Israeli soldier Gilad Shalit abducted by Hamas.

Aramim said it is important for both peoples to end the occupation. “The on-going occupation gives Hamas the legitimacy to continue fighting against it,” he said.

On Jan. 16, 2007, his 10-year-old daughter, Abir, was shot by an Israeli soldier while standing outside her school with some classmates.

Even after his daughter’s death, Aramim has not let go of his hope for peace and commitment to non-violence.