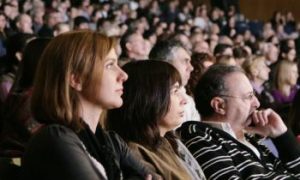 Tens of thousands of Pakistanis protested the reform of a blasphemy law on Sunday. Last week, a security guard killed Pakistan's governor of Punjab, Salman Taseer, who had proposed changes to the law.

"Our belief in the sanctity of our prophet is firm and uncompromising, and we cannot tolerate anyone who blasphemes. Whoever blasphemes will face the same fate as Salman Taseer," Abdul Rehman, one of the protesters, told AFP.

The controversial law was recently used to sentence a Christian woman to death, after she allegedly made derogatory remarks about Prophet Mohammed. The protesters held signs proclaiming their support for Mumtaz Qadri, the security guard arrested for killing Gov. Taseer last week