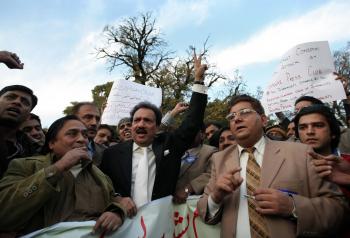 Jasper Fakkert
Editor-in-Chief, U.S. Editions
Jasper Fakkert is the Editor-in-chief of the U.S. editions of The Epoch Times. He holds a Bachelor's degree in Communication Science and a Master's degree in Journalism. Twitter: @JasperFakkert
View profile
Follow
biggersmaller
Print
Pakistan authorities have ordered increased security for media in Pakistan following a deadly suicide bomb attack blast at the Press Club in Peshawar city on Tuesday that killed three and wounded at least 20.

A security camera recording released by the press club shows a man dressed in black, being searched by a guard in front of the entrance of the club just moments before he detonates what the Pakistani police estimate as 22 pounds of explosives. The guard, the club’s accountant, and a woman died in the explosion.

“Threats against the Pakistani media and press clubs are nothing new but it is outrageous that this press freedom sanctuary should be targeted in this fashion,” said Reporters Without Borders (RSF), a press freedom organization, in a statement.

The only media victim was a cameraman who was slightly hurt, according to RSF.

“We grieve along with Pakistani journalists for the lives lost,” said National Press Club President Donna Leinwand in a statement.

The Press Club in the Northwestern Pakistan city had been subjected to a series of threats leading up to the suicide attack.

The attack has not been claimed by anyone, but Pakistani Taliban fighters have repeatedly struck targets in Peshawar as an apparent retaliation against a Pakistani army campaign aimed at the Taliban and al-Qaeda in the South Waziristan region, near the border with Afghanistan.

Pakistan has been under increasing pressure from the United States to purge Taliban forces from the border area, where they have been launching attacks on NATO forces in Afghanistan.

When U.S. Secretary of State Hillary Clinton visited Pakistan on Oct. 28 more than 100 people, including women and children, were killed in a bloody attack when a car loaded with explosives detonated in the Peshawari market.

Reporters have been attacked and killed in Pakistan’s ethnic Pashtun tribal regions along the Afghan border and elsewhere, but the Tuesday blast was the first on a reporters’ club in a city.