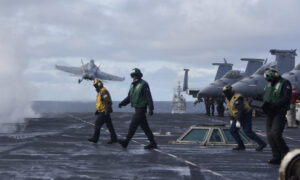 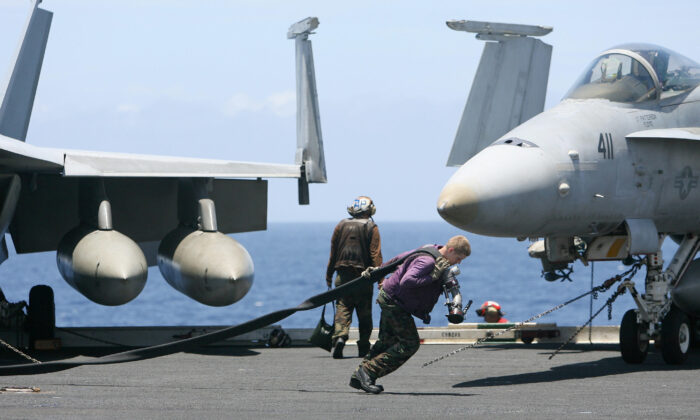 A US Navy crewman pulls a fuel pipe across the deck of USS Kitty Hawk (CV63) aircraft carrier in the Bay of Bengal, during the Malabar exercise on Sep. 7, 2007. (Deshkalyan Chowdhury/AFP via Getty Images)
Australia

The Pacific island nation of Palau, south-west of Guam, has offered land to the United States to increase its military presence in the region after the Chinese regime placed economic pressure on the country due to its ties to Taiwan.

The Wall Street Journal reported that Remengesau said his request to the United States was simple: “Build joint-use facilities, then come and use them regularly.”

“It’s a pretty good location to operate out of, although the airfields wouldn’t accommodate much more at this point besides C-130-type aircraft,” said Wilsbach.

“But that is something that we’re absolutely looking toward,” he said. “And, frankly, we so appreciate the government of Palau asking us to come in.”

Palau’s request to host the U.S. military comes after the nation experienced increased economic pressure from the Chinese Communist Party after it banned Chinese tour operators from selling packages to travel to the island nation in 2017 when Palau reportedly refused to drop its diplomatic ties to Taiwan.

Currently, there are only four Pacific nations that continue to have diplomatic ties with Taiwan. The Chinese regime believes Taiwan to be a renegade province that should be under Beijing’s control.

Palau’s primary source of economic revenue comes from the tourism industry, which makes up 80 percent of the annual GDP, according to Lloyds Bank. The ban has come directly after a two-year boom in Chinese tourism for the Pacific nation which caused many in the island to pursue development loans that they are now struggling to repay.

Leilani Reklai, a former president of the Palau tourism association, noted that some Palauans viewed the influx with scepticism. However, many still sought to take advantage of the inflow and ended up in debt.

“This is the Chinese strategy, this is what they do, they are going to pour a lot of money in here, and get you addicted like it’s Coke and then turn off the faucet,” Reklai said.

Evan Rees, an Asia-Pacific analyst at Stratfor, told the Guardian that China uses tourism bans as part of a broader toolkit to compel another country’s behaviour.

This is a view shared by Michael Shoebridge from of the Australian Strategic Policy Institute. Shoebridge told The Epoch Times in May: “The idea of the Chinese state using its consumer spending power as an economic weapon, is not new, it’s real.”

Australia experienced a similar tactic earlier in the year when the Chinese regime banned meat, barley, and wine imports and issued a warning to Chinese students not to travel to Australia.

A Strategic Win for America and Australia’s Pacific Goals

The offer is a strategic win for the United States and allies like Australia because Palau sits in what is regarded as the ‘second island cloud‘ that enables America and its allies to hold the Pacific if China continues to act aggressively in the South China Sea.

In the past six months, Beijing has increased its aggressive expansion activities, including its activities in the South China Sea, military flights in the Taiwanese Straits, engaging in a border skirmish with India, and enacting a national-security law to limit Hong Kong’s autonomy.

Palau is also strategically located near to Darwin, Australia; Guam; the Philippines; and Japan, where America has functioning defence facilities.

Recently Australia and America have increased its defence force presence in the Pacific after experts warned that the region was at risk of being co-opted by China.

In September, American and Australian defence forces conducted bomber training in the Northern Territory with planes flying from Guam to test integration between the two defence forces and display its capabilities in the region.

While in July, Australia and the United States conducted a freedom of navigation operation on their way to Rimpac with fellow Quad member Japan through the Philippine Sea.

As part of Australia Pacific Step-Up Australia has been in the process of supplying Palau with a fleet of patrol boats for its maritime defence, under the Pacific Maritime Security Program. At the hand over of the most recent patrol boat on Sept. 18 the Assistant Defence Minister and Minister for International Development and the Pacific, Alex Hawke said the Guardian-class Patrol Boats make an important contribution to regional security.