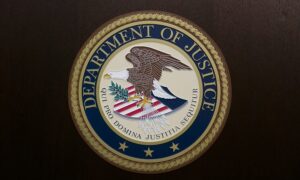 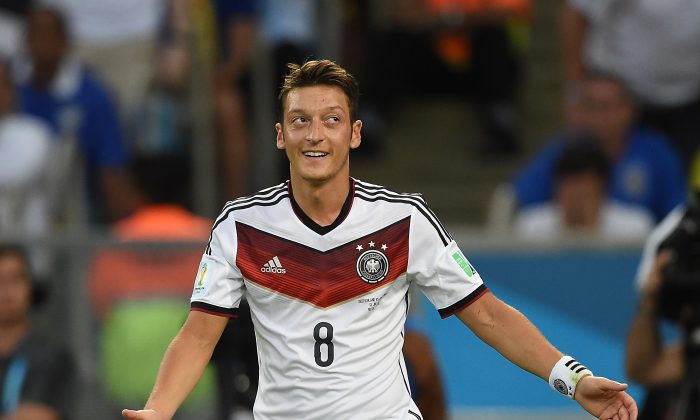 Germany's midfielder Mesut Ozil reacts during the second half of the 2014 FIFA World Cup final football match between Germany and Argentina at the Maracana Stadium in Rio de Janeiro on July 13, 2014. (PEDRO UGARTE/AFP/Getty Images)
Sports

Football star Mesut Özil did not donate his World Cup winnings to Gaza.

According to reports, the 25-year-old German international, who is of Turkish descent and is a practicing Muslim, supposedly donated his £350,000 (about $600,000) World Cup winnings to the children of Gaza.

GolTV posted a picture of a dirty Real Madrid Özil jersey on Facebook, and added a caption that Özil would be giving his World Cup winnings to Gaza after “a child was assassinated wearing his jersey.”

However, Rob Harris, a United Kingdom Associated Press sports writer, has since tweeted that Özil’s spokesman, Roland Eitel, told AP that the footballer is donating his earnings to “projects in Brazil” instead of to Gaza.

Özil did post a message on his official Facebook page on July 16 stating that he was supporting the surgery of eleven sick children before the World Cup, and will now be supporting a total of twenty three children because Germany’s World Cup victory made him realize that “is not only due to eleven players but to our whole team.”

FIFA only allows each country to bring twenty three players in their final World Cup squad.

The project that Özil donated to is BigShoe, which helps needy children who require surgery.

See an Associated Press report below on current Gaza conflict.

Gaza residents had crowded banks, vegetable markets and shops as they took advantage of the first respite from 10 days of fierce fighting.

The military says the rocket struck the city of Ashkelon at precisely 3 p.m. (1200 GMT, 8 a.m. EDT) as the pause in military activity ended.

No injuries were reported. Gaza militants also fired three mortar shells toward Israel after the truce took effect at 10 a.m. Israel has not responded yet to either incident though it vowed to strike hard if fire continued.

Gaza City, a virtual ghost town for the past 10 days, returned to apparent normalcy within minutes of the start of the truce. Streets were jammed, motorists honked horns and Hamas police directed traffic at busy intersections.

Crowds of hundreds formed outside banks, with people jostling and shouting to get to ATM machines. In an outdoor market, shoppers filled plastic bags with fruit, vegetables and freshly slaughtered chickens.

The rush to restock signaled that Gaza residents don’t expect a quick end to the fighting. Egypt renewed cease-fire efforts after its initial attempt collapsed earlier in the week, but the demands of Israel and Hamas remain far apart.

“‘The situation is likely to get worse because there is no clear way out of it,” said Moussa Amran, 43, a money changer in central Gaza City.

Israel accepted Egypt’s initial call earlier this week to halt all hostilities, but Hamas rejected the idea because it does not want to return to the situation before the outbreak of fighting. An intensified Egyptian border blockade of Gaza over the past year, combined with long-running Israeli restrictions on access, had severely weakened the Islamic militant group.

Egypt’s Foreign Minister Sameh Shukri insisted in an interview with The Associated Press that the cease-fire deal was still alive and expressed frustration that “Palestinian factions” — a clear reference to Hamas — had not agreed to it.

Hamas’ agreement is crucial to any such truce, but its demand that the blockade be eased significantly is likely to be rejected by Israel and Egypt because it would strengthen the group’s hold on Gaza, where it seized power in 2007.

Thursday’s temporary truce, brokered by the United Nations, came after Israel carried out nearly 2,000 air strikes on Gaza over 10 days and Hamas fired more than 1,300 rockets into Israel, reaching the country’s economic and cultural heartland. The cross-border fighting has so far killed more than 230 Palestinians and an Israeli, according to officials.

Fighting continued early Thursday in the lead-up to the cease-fire, with the military saying it foiled an attack by 13 militants who sneaked into Israel through a tunnel from Gaza. Israeli aircraft struck the fighters at the mouth of the tunnel some 250 meters (820 feet) inside Israel, near a kibbutz.

Lt. Col. Peter Lerner, a military spokesman, said the military believed at least one militant was killed in the strike and that the remaining fighters appeared to have returned to Gaza through the tunnel.

Footage released by the military showed a number of individuals creeping slowly toward what appeared to be a hole in the ground. A separate shot showed an explosion from an airstrike on the tunnel entrance.

Lerner said the militants were armed with “extensive weapons,” including rocket-propelled grenades.

Hamas’ military wing said all its fighters returned safely even though the group was targeted by Israeli warplanes.

It was the second time militants attempted to sneak into Israel in this round of fighting. Last week, four fighters were killed when they infiltrated Israel from the sea.

The military also said 15 rockets were fired at Israel Thursday morning, including toward areas in the center, some 90 kilometers (55 miles) from the Gaza Strip.

Three people were killed by a tank shell that hit a house in the southern town of Rafah, the Hamas-run police and Gaza Health Ministry spokesman Ashraf al-Kidra said.

The Gaza Interior Ministry had earlier said that 30 houses were struck in the Israeli raids. Four people were killed and a 75-year-old woman died of wounds suffered the day before, the ministry said.

A senior Hamas official said the group’s deputy leader, Moussa Abu Marzouk, met with Egyptian officials Wednesday night to present Hamas’ demands, which were also delivered to Jordan and the U.N. The official said Hamas wants countries other than Egypt to be involved in forging an agreement to end the fighting, a sign of the militant group’s mistrust of Cairo.

Egypt, the first Arab country to make peace with Israel, has often served as a mediator between Israel and Hamas. But Hamas does not trust Egypt’s current rulers, who deposed a Hamas-friendly government in Cairo last year.

Egypt’s new leaders have since launched a sweeping crackdown on Hamas, shutting down a network of smuggling tunnels along the border that were the Islamic militant group’s key economic lifeline — and weapons supply route.

The official spoke of condition of anonymity because he wasn’t authorized to discuss the diplomatic steps with the media.

Also Thursday, a Jerusalem court indicted a 29-year-old and two 16-year-olds in the death of Mohammed Abu Khdeir, 16, whose charred body was found after he was reported kidnapped. According to the indictment, the suspects went out for a “man hunt” that ended when they “cruelly” killed Abu Khdeir.

The indictment said the suspects carried out the crime in revenge for the deaths of three Israeli teens last month and that they killed Abu Khdeir “solely because he was an Arab.” The suspects are also accused of attempting to kidnap a seven-year-old Arab boy a day earlier.

The indictment said Abu Khdeir was strangled, beaten and burned to death while he was unconscious.

The death led to days of clashes between Palestinian protesters and police in east Jerusalem and elicited widespread international condemnation.