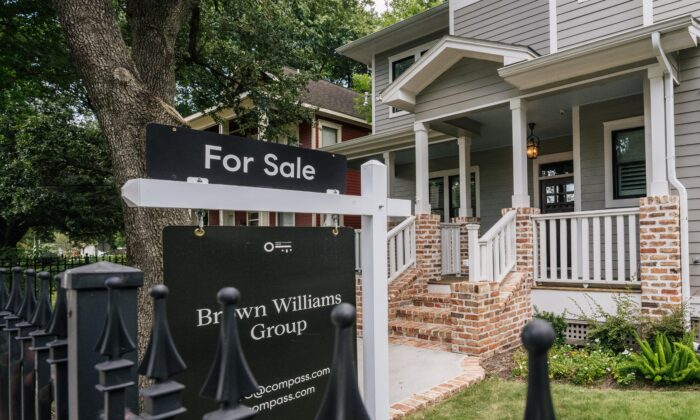 A sign is posted in front of a home for sale in San Rafael, Calif., on Sept. 28, 2021. (Justin Sullivan/Getty Images)
Economy

For Americans seeking to buy a home, this year has likely brought much frustration. A nexus of several natural and man-made factors culminated in the tightest residential real estate markets in recent memory.

While median wages rose by 4.3 percent in October from a year earlier, the typical mortgage payment (30-year fixed rate with a 10 percent down payment) increased nearly 17 percent, according to the National Association of Realtors (pdf). That means an average American worker earning about $4,300 a month would need to spend nearly $1,400 a month on a typical payment. And that’s before income taxes, Social Security taxes, Medicare taxes, property taxes, home insurance, and utility bills.

There are signs that the situation may improve, but it’s not clear by how much.

With the CCP (Chinese Communist Party) virus pandemic and government restrictions tied to it, the economy took a giant hit last year. Normally, that would be expected to send home prices tumbling, but this time, it was different. Prices slightly dipped for one quarter before bouncing back; they’ve since been going up, federal housing data show.

The Federal Reserve responded to the recession by slashing rates, issuing loans, and buying up large amounts of securities. As a result, mortgage rates dropped. But that ultimately didn’t make houses more affordable. Sellers were asking more, and buyers were willing to pay.

With the initial pandemic lockdowns, a large portion of city dwellers headed for the country, seeking safety from the virus that causes COVID-19, as well as respite from draconian restrictions implemented in response to it. For some, it was a catalyst to leave the city for good. For many, it was supposed to be a temporary move until offices were reopened, but when government restrictions dragged on into 2021 and many employers signaled at least some remote work would stay for good, permanently moving and working from home became attractive. Many were looking for less-crowded living—a nice home with a yard or land.

Accustomed to exorbitant rents in cities, these COVID-19 refugees came with relatively deep pockets. An average one-bedroom apartment in New York City rents for $3,100, according to Zumper. Putting the same money into a mortgage could fetch a $500,000 mansion upstate.

However, at the same time, lumber prices skyrocketed, curbing the boom in new construction.

Buyers ended up in bidding wars, snatching at first opportunity whatever decent house became available. During the summer, a typical home would stay on the market for just two weeks. A truly nice home would vanish much faster.

The market has cooled a bit in recent months. But if a plateau has been reached, it’s a harshly elevated one. The median sale price in the third quarter topped $400,000, compared to less than $330,000 before the pandemic.

Lumber prices have dropped sharply in recent months, although not nearly to pre-pandemic levels. The soft lumber producer price index was nearly 33 percent higher in October than in January 2020.

The future of home prices remains uncertain. Companies expect many more workers to come back to the office, although many times only for part of the workweek. But that’s unlikely to bring back to the city all those who’ve already uprooted themselves. Moreover, city rents have been bouncing back toward pre-pandemic levels or even higher.

There also are broader considerations. The Biden administration has signaled plans to impose climate restrictions both on construction and finance, which could push new home prices higher still. Meanwhile, hundreds of thousands of illegal aliens have been entering the country, all of whom will also need housing.

With inflation hitting a 30-year high in October, the Fed announced it will somewhat tighten its monetary policy, which is expected to push mortgage rates up and inhibit demand.