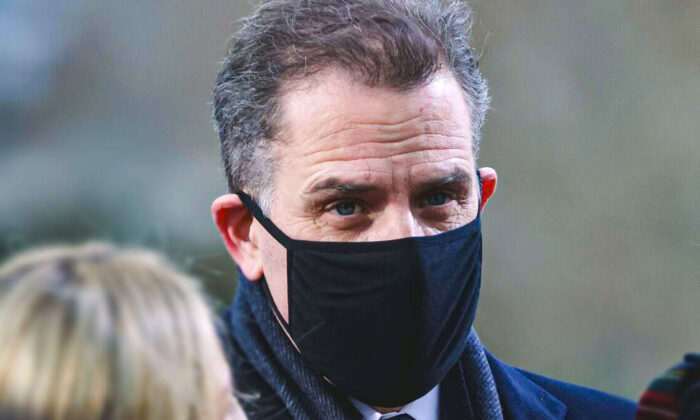 Hunter Biden attends his father Joe Biden's inauguration as the 46th President of the United States on the West Front of the U.S. Capitol in Washington on Jan. 20, 2021. (Jonathan Ernst/Pool/Reuters)
US News

The ranking member of the House’s principal oversight committee has launched a probe into a Hollywood lawyer’s “sudden patronage” of Hunter Biden allegedly involving financial and pro-bono legal support.

Morris is known for negotiating a $550 million licensing deal for the creators of “South Park” and has won a Tony award as a co-producer of the Broadway musical “The Book of Mormon.” His law firm has represented Hollywood celebrities including Chris Rock, Scarlett Johansson, and Matthew McConaughey.

Comer’s letter came after a New York Times report in early May that alleged that Morris has taken on a “financier, confidant and would-be avenger” for the president’s son. The latter is under federal investigation into his tax payments and alleged foreign deals with entities affiliated with the Chinese Communist Party, Russia, Kazakhstan, and Ukraine.

According to Federal Election Commission (FEC) records, Morris donated $2,800 to Joe Biden’s campaign “Biden for President” in October 2019, and a total of $55,000 in 2020 to the American Bridge 21st Century Political Action Committee, which supported Joe Biden in the 2020 presidential election. The New York Times reported that these donations occurred before Morris met and developed a relationship with the president’s son.

According to Comer, the oversight committee Republicans are “particularly troubled” in seeing Morris’s alleged role in “attempting to personally shield Hunter Biden from congressional and criminal investigation.”

The ranking member cited allegations against Hunter Biden in The Times’s report, which said that not only did Morris lend $2 million to Hunter Biden to help him pay off federal tax, but the lawyer also provided counsel to Hunter Biden “as he navigated a paternity and child support lawsuit, and helped him with his art career and a memoir published last year that was partly a response to attacks from former President Donald J. Trump.”

Comer noted that Morris funded a documentary about Hunter Biden’s life, which the lawmaker said serves to “deflect oversight of Hunter Biden’s numerous foreign business dealings” and “shield President Biden from becoming implicated in them.”

In addition, Comer said that Morris “convened a team of 30 lawyers and investigators” to discredit the allegations against Hunter Biden and thereby protect the president.

“Such activities may constitute an ‘in-kind contribution,’ defined by the FEC as ‘goods or services offered free or at less than the usual charge,’ Comer wrote, adding that contributions of this nature “must be properly reported to the FEC.”

Comer went on to request an array of documents, including agreements between Moris and Hunter Biden regarding the attorney’s $2 million loan, disclosure documents to the FEC for Morris’s “in-kind” contribution to Joe Biden’s campaign, Morris’s communications with the White House, and any records that describe investigations of the Biden family and its associates.

“We are committed to determining the extent to which Hunter Biden’s business dealings with foreign adversaries compromise American national security and President Biden’s ability to lead the nation without impartiality and providing answers to the American people,” Comer wrote.

“It is critical that the American people better understand the extent to which your activities implicate federal elections laws and President Biden’s campaign.”