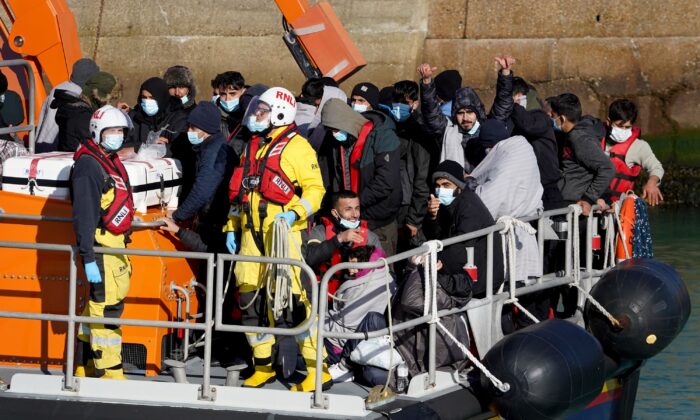 A group of people thought to be migrants are brought into Dover, England. (PA)
UK

Over 20,000 Migrants Have Crossed English Channel Into UK This Year

More than 20,000 people have crossed the English Channel illegally into the UK aboard small boats since the start of the year, more than double the total for the whole of 2020, the latest figures show.

Despite government promises to stem the flow of small boats, which are often overloaded semi-rigid inflatables, the numbers this year have continued to eclipse those of previous years.

On Nov. 2, UK authorities rescued or intercepted 456 people who attempted to cross the Channel, and the French authorities also prevented 343 people from reaching the UK.

Some 19,756 people had already reached the UK from France in small boats this year, according to data compiled by the PA news agency.

“We are working with the French to stop boats leaving their beaches and crack down on the criminals driving these crossings,” he said.

Last week, Home Secretary Priti Patel described as “appalling” and an “absolute tragedy” an incident in which as many as three people are thought to be unaccounted for after trying to cross from France to the UK in a dinghy.

Two men—both Somali nationals—were rescued off the Essex coast near Harwich on Oct. 25 and searches for any possible remaining survivors have now been called off.

According to the Home Office, last year, when migration dropped due to pandemic restrictions, “known illegal entry” to the UK as a whole was around 16,000 people.