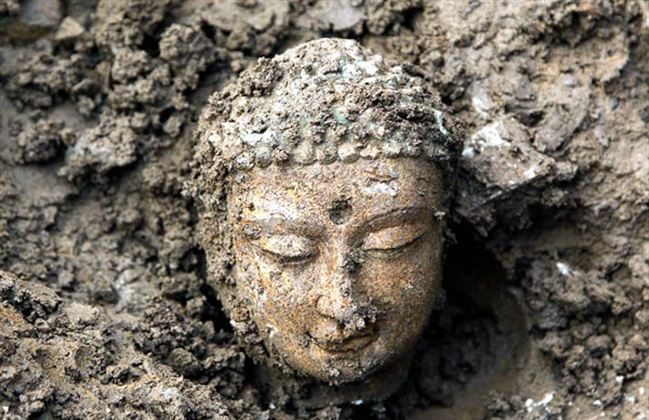 One of the 3,000 Buddha statues uncovered in 2012. (Sun Zifa/ImagineChina/AP)
archaeology

Archaeologists have discovered more than 1,000 ancient Buddha statues in three stone caves on a cliff-face in Yangqu County, in north China’s Shanxi Province, according to a report in China.org.cn. Although official dating has not yet been carried out, it is believed that the statues date back to the Ming Dynasty.

The Ming dynasty, was the ruling dynasty of China for 276 years (1368–1644 AD) following the collapse of the Mongol-led Yuan dynasty. The Ming, described by some as “one of the greatest eras of orderly government and social stability in human history”, was the last dynasty in China ruled by ethnic Han Chinese. The creation of stone Buddha statues reached its peak during the period from the Northern and Southern Dynasties (420-589) to the Tang Dynasty (618-907), so it is rare to find stone Buddha statues from the Ming Dynasty.

According to traditional accounts, Buddhism was introduced in China during the Han dynasty (206 BC-220 AD) after an emperor dreamed of a flying golden man thought to be the Buddha. Although the archaeological record confirms that Buddhism was introduced sometime during the Han dynasty, it did not flourish in China until the Six Dynasties period (220-589 AD). The year 67 CE saw Buddhism’s official introduction to China with the coming of the two monks Moton and Chufarlan.

The latest finding including stone statues carved into the cave walls and measuring 12 to 25 centimetres long, said Yang Jifu, director of the county’s cultural heritage tourism bureau. Yang said two of the caves had been restored in the Ming Dynasty, according to the record on two steles in the caves.

While the discovery is rare and significant, it is not unheard of. More than 2,000 statues were found in a temple in China’s Hebei Province in the 1950s, and in 2012, archaeologists uncovered more than 3,000 Buddha statues, which was the largest discovery of artifacts since the founding of the People’s Republic of China in 1949.

The most recent discovery will contribute to the research on the development and change in religious art in northern ancient China.