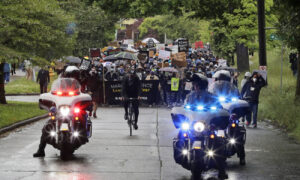 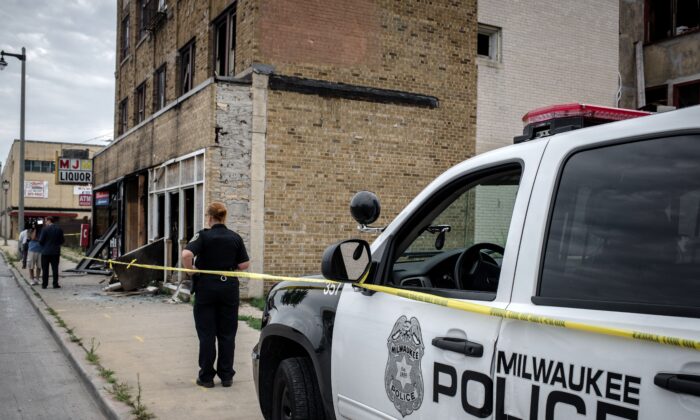 A police officer stands before the remains of a bar in Milwaukee, Wisconsin, on Aug. 15, 2016. (Cengiz Yar/AFP via Getty Images)
2020 Election

At least 100 police agencies are pulling out of agreements to send personnel to next month’s Democratic National Convention (DNC) in Milwaukee, partly over concerns that officers will be unable to use tear gas to control crowds under a recent directive.

The law enforcement agencies in Wisconsin and across the country who are set to withdraw from the security agreements had previously said they will send officers to bolster security at the DNC, which will run from Aug. 17-20 at the Wisconsin Center in downtown Milwaukee.

The move follows an order from the Milwaukee Fire and Police Commission last week, which directed Chief Alfonso Morales to revise the police department procedures—including prohibiting the use of tear gas and pepper spray. The order threatens Morales’s termination if he fails to comply “fully and promptly.”

The order came amid intense scrutiny of police tactics at protests and riots in Portland, Oregon, and elsewhere in recent weeks, following the death of George Floyd in Minneapolis in late May.

Morales announced the news of the agencies’ withdrawal in an interview with WTMJ-TV, citing concerns over the order prohibiting the police use of pepper spray and tear gas at demonstrations. He didn’t elaborate on which law enforcement agencies plan to pull out.

The convention has been scaled down to a mostly virtual event due to the CCP (Chinese Communist Party) virus pandemic, with about 300 people expected to attend in person. Most of the speeches will be delivered online from other locations, though former Vice President Joe Biden has said he will be in Milwaukee to accept the nomination. Despite the event’s smaller scale, police are preparing for potentially large protests in and around the venue.

The Epoch Times reached out to the Milwaukee police oversight commission, the Milwaukee Police Department, and the convention for comment, but did not immediately hear back.

“We respect the Fire and Police Commission’s decision. But in this particular case, we strongly disagree with the actions they’ve taken,” Lamb said.

He said he was concerned that the safety of the public and police officers could be compromised.

“We believe in removing those tools, the use of chemical irritants or pepper spray, from the available resources that the law enforcement officers would have at their disposal if protests become non-peaceful would severely compromise the safety of the public and also the safety of the law enforcement officers who would be assigned to protect the DNC,” he added.

Other police departments, such as the Madison Police Department which originally committed to providing 100 officers to Milwaukee, decided to pull out over CCP virus concerns.

According to the Wisconsin State Journal, the department notified Milwaukee early this month that “an accelerating COVID-19 pandemic coupled with ongoing protests in Madison” had strained its resources, making it impossible to commit resources to the convention.