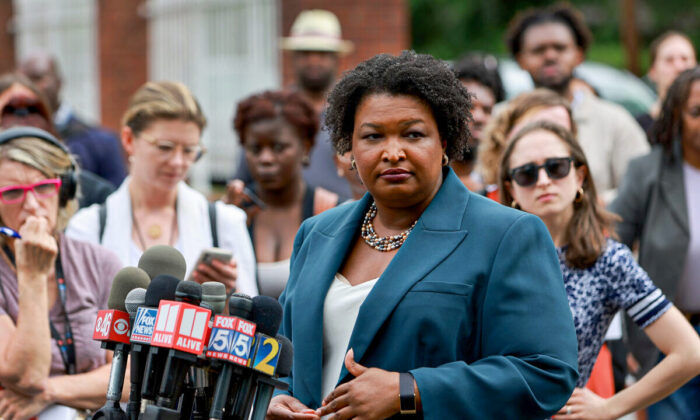 Democratic gubernatorial candidate Stacey Abrams speaks to the media during a press conference at the Israel Baptist Church in Atlanta, Georgia, on May 24, 2022. (Joe Raedle/Getty Images)
By Frank Fang

A total of 102 sheriffs in Georgia have joined Gov. Brian Kemp, a Republican who is seeking a second term, in a statement condemning Democratic gubernatorial candidate Stacey Abrams over her support of “soft-on-crime policies.”

The statement, released on June 27, also criticized Abrams for “advancing the Defund the Police movement” with her position as a board member at the Marguerite Casey Foundation, a Seattle-based grant-making group, which the sheriffs called an “anti-police organization.”

“Stacey Abrams has repeatedly shown complete disdain for law enforcement and the risk we take every day putting our lives on the line to serve our communities,” the sheriffs wrote.

“Ms. Abrams actively serves on the governing board of—and has profited from—an anti-police organization which openly advocates for abolishing prisons and stripping local police departments of their funding,” they added.

Georgia’s governor race is a rematch between Kemp and Abrams. In 2018, Kemp edged Abrams by 54,723 votes with over 3.9 million voters casting a vote. This year, Kemp defeated former Sen. David Perdue to win the GOP nomination.

So far it has been a tight race between the two candidates. According to a recent poll from Easter Carolina University’s Center for Survey Research, Kemp led Abrams 50 percent to 45 percent. The poll surveyed 868 registered voters in Georgia from June 6 to June 9.

The foundation’s 2020 financial filing (pdf), available on its website, shows that it has given grants to groups including the Movement for Black Lives and Louisville Community Bail Fund.

The foundation is vocal in its support for the #AbolishthePolice and #DefundthePolice movements, as evidenced by the frequent mention of the two Twitter hashtags on its social media account. One recent example involved a post promoting the foundation’s book event.

“Stacey Abrams also supports proposals that put criminals back on our streets and clears their criminal record, and she opposed legislation to crack down on human trafficking when she served in the state legislature,” the sheriffs added.

Abrams’s decision to skip voting twice on an anti-sex trafficking bill (HB 341) was a contentious issue leading up to the 2018 race. At that time, Abrams was the minority leader of the Georgia House of Representatives.

“These policies and Ms. Abrams’ role in advocating for them put Georgia’s law enforcement officers and the communities we serve at risk,” the sheriffs wrote. “We call on Stacey Abrams to disavow the dangerous policies she supports.”

The Epoch Times has reached out to Abrams’s campaign for comment.

The sheriffs applauded Kemp for what he has done in the last four years.

“Governor Kemp has championed legislation to recruit and retain more officers into the profession, strengthen penalties for criminals and help keep Georgia’s streets safe, and prevent rogue local governments from stripping critical funding and resources from police,” they wrote.

“In these uncertain times, it is critical to our profession that Georgia’s leaders stand firmly behind the men and women in law enforcement who keep Georgia families safe,” they added.

The sheriffs’ remarks came just days after Kemp issued a statement calling for Abrams to resign from the Marguerite Casey Foundation.