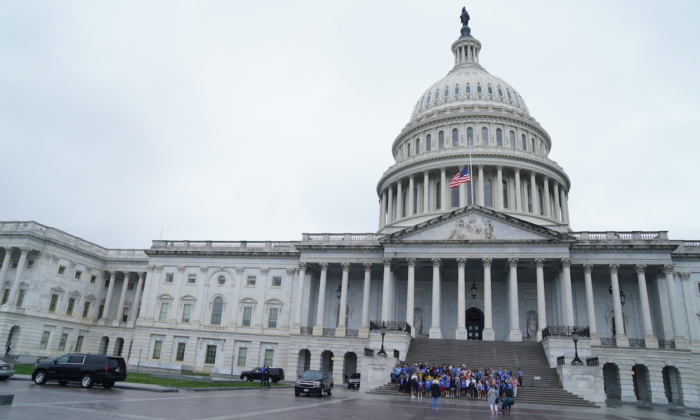 The U.S. Capitol building in Washington on May 13, 2022. (Jackson Elliott/The Epoch Times)
Thinking About China

Our Own Stalinist Moment

Terror as a political tool of intimidation and repression was the primary means for keeping the Soviet populace quiescent under Josef Stalin’s reign. Frozen in fear and involuntarily docile, the population learned to dread the Central Committee’s police agencies—at this time, primarily the NKVD—that enabled the party’s complete rule.

Not all of it was enforced from the top down, however. No authoritarian system can survive for long through force alone. Not only must the people be robbed of their will to resist, but they must also be led to believe that there is a malicious if unseen force trying to destroy their way of life—and their only protection against said force is, of course, the state.

Stalin’s show trials of the mid-1930s did exactly this. One after another, previous leading Bolsheviks took to the stand and pleaded guilty to actively undermining the world’s first worker’s utopia. It was hard to believe that those who ostensibly devoted their entire lives to building the latter would at the same time be guilty of working to destroy it. Yet, one after another, each stood up and beat his chest as a traitorous Trotskyist, a deviationist of the “right opposition,” and a “wrecker” of the great socialist experiment.

If we turn to our own country, it’s getting harder to say that the U.S. justice system is not taking on an increasingly partisan nature itself. There seems to be a multiple-tier system in which there are separate legal tracks dependent on political persuasion. One, holding control over all institutions of power and utilizing their positions to manipulate the law with impunity; the other, condemned before the trial even begins.

The incestuous nature of the Washington, D.C. justice system comes as no surprise to regular readers of this publication. Still, it’s worth recounting some details of the most prominent political trials in the last several weeks.

The indictment of Michael Sussmann, a former Hillary Clinton campaign lawyer, resulted in unearthing important information that further tied Clinton to the Trump-Russia hoax. Unsurprisingly, in the end, Sussmann was still found not guilty by a jury of his peers.

A jury of his D.C. peers, that is. Multiple individuals in the juror pool were reported as having donated to Clinton. The federal judge in the case, Christopher Cooper, also happens to be married to Amy Jeffress, the lawyer who represented Lisa Page (noted FBI lawyer of Russia hoax fame) in civil court. Current Attorney General Merrick Garland (who was also a failed Obama nomination for the U.S. Supreme Court) presided over the wedding. Jeffress was a former top aide to then-Attorney General Eric Holder.

Speaking of Holder, Obama’s self-proclaimed “wing-man” was held in criminal contempt by the U.S. Congress in 2012 for refusing to turn over documents regarding the “fast and furious” federal program-turned disaster. When Obama asserted executive privilege, Holder claimed he was honoring the latter by refusing to comply with a congressional subpoena. Despite a federal judge rejecting this claim, no legal action was forthcoming.

Meanwhile, Peter Navarro, former White House trade adviser under President Donald Trump, was detained in handcuffs and leg irons (presumably, to ensure that the 72-year-old didn’t make a run for it) for refusing to comply with a subpoena from the Jan. 6 committee. Like Holder, Navarro maintains that he should be protected by executive privilege. He has also reported that he’s suing the Department of Justice.

Against this backdrop, the nation heads for one of the most clear-cut cases of a Soviet-style show trial in our modern political era.

To quote Navarro from his appearance on “Tucker Carlson Tonight”: “The mission of that partisan [Jan. 6 commission] witch-hunt, kangaroo [court] committee is … to concoct a fake hoax around January 6th based on criminal charges against Trump to prevent him from running for reelection and taking back the White House in 2025 January.”

Unlike the Sussmann case, which received little to no mainstream media coverage—except in gloating after the decision—there’s sure to be nonstop coverage of the committee’s show trials.

The first of the latter is to be held on June 9. The hearings will be used to incite Democrat anger and fear in the run-up to November’s midterm elections. Former ABC News President James Goldston was brought on to create a politically compelling spectacle out of the event. The New York Times expects the hearings to proceed according to a “carefully choreographed rollout of revelations.”

Video footage by Nick Quested, a filmmaker who was shooting a documentary on the Proud Boys at the time of the Jan. 6 protest, will also be presented at the hearing. It’s unlikely that, at this point, any new evidence in the footage will point to a change in circumstances or additional charges for the Jan. 6 defendants.

Instead, the purpose of the footage will be to present the protests as a three-hour rampage. It will follow the “choreographed rollout” described above, selecting the most egregious moments from the day. It will not feature the footage of somewhat confused-looking Jan. 6 attendees meandering into the Capitol or those who stayed within the red velvet ropes. It will also not show the video footage of protesters calmly interacting with police officers inside the building.

If any new substantive evidence is presented, it will likely be content from the “Ministry of Self Defense” Proud Boys Telegram chat. This coincides with Monday’s new indictment on seditious conspiracy charges against Proud Boys Enrique Tarrio, Joseph Biggs, Ethan Nordean, Zachary Rehl, and Dominic Pezzola.

According to The Wall Street Journal, the complaint says that the Proud Boys “directed, mobilized and led” the crowds on Jan. 6. The charge of sedition is rare and reserved for cases in which an individual is accused of having “[conspired] to use force to overthrow the government, impede its laws or seize its property.”

There would likely need to be new bombshell evidence presented during the hearing in order to meet the required threshold for conviction. A group chat of American patriots, veterans, and blue-collar workers will almost certainly include hyperbole that sounds harsh when presented out of context—good to present the illusion of danger and motivate voters.

But evidence of a coordinated, detailed, and organized attempt to launch a revolutionary coup against the most powerful government in the world? That one is harder to believe. The fact that there have been guilty pleas to conspiracy and a willingness to cooperate can say just as much about the psychological toll of being in solitary confinement for an extended period, as it could about the existence of some hidden master plot.

By the time Stalin’s “Great Terror” came around in the late 1930s, it’s easy to imagine that a large segment of the population was ready to accept that it really was foreign spies, anti-Soviet wreckers, greedy peasant kulaks, and the evil Trotsky who were the primary causes of the country’s woes. As political opposition was led away at gunpoint and the nation’s founders publicly admitted guilt, many likely believed the false charges of conspiracy and sedition.

We’ve seen the double standard in our own justice system, as certain individuals of the wrong political persuasion are made public examples of. Meanwhile, others who commit the same offenses, or worse, walk away with a slap on their hand.

Now, during the Jan. 6 committee’s partisan hearings, we’ll see our own example of show trials. This is about more than trying to deflect from a deteriorating domestic situation to win votes in November. It’s about the health of our Republic. One narrow group will be continuously castigated as the enemies of the people or, as the refrain will go, “enemies of democracy.” All of this is in addition to the rampantly increasing censorship of dissenting voices and deteriorating security of our elections.

Many will (and do) believe that the Capitol protest really was a coordinated attempt to seize power instead of a protest that got out of hand. One way or another, all will be tied back to Trump—our own Trotsky. By extension, his supporters, in general, will come to be castigated as insurrectionists.

The Proud Boys currently provides a form for the nonexistent “domestic terrorist threat” content that the partisan intelligence agencies falsely tell us is the country’s most pressing problem. But make no mistake about it, with the current media environment, there’s no difference to those who have accepted the Stalinist lie: To them, we are all wreckers, we are all Proud Boys.

Regardless of the midterms, this trend is not going anywhere anytime soon.