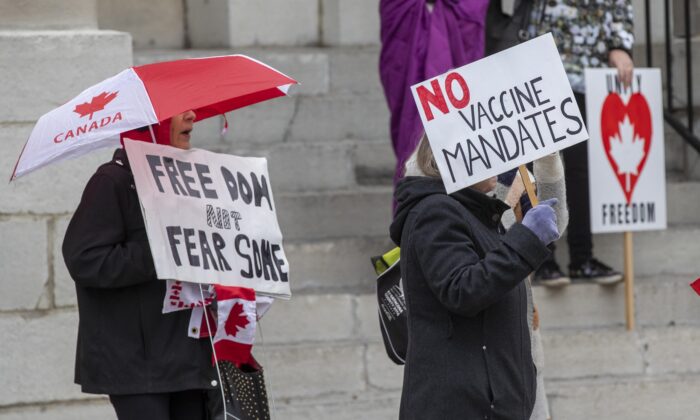 People protest against COVID-19 vaccine mandates and masking measures during a rally in Kingston, Ont., on Nov. 14, 2021. (The Canadian Press/Lars Hagberg)
Canada

‘Our Free Society Is at Risk’: Over 80 Lawyers Call for an End to COVID-19 Vaccine Mandates

A group of lawyers has issued a declaration calling for an end to COVID-19 vaccine mandates and passports, measures they say have “strategically” infringed on Canadians’ Charter-protected rights and freedoms.

“In our country, civil liberties are under unprecedented attack,” reads a statement on the “Free North Declaration” website.

As of Nov. 15, the declaration had been signed by at least 80 law practitioners, including 13 who selected the option of signing anonymously to avoid “negative repercussions” from disclosing their name publicly. Concerned Canadians can also sign the declaration to support the cause.

The declaration says that while COVID-19 rules have restricted Canadians’ ability to work, travel, and gather, they have carefully avoided crossing the line where legal or charter protection challenges could be triggered.

“They erode civil liberties strategically, attempting to not run afoul of the law or to trigger protections in the Charter of Rights and Freedoms such as liberty and security of the person, the freedoms of association, assembly, expression, conscience, religion, and mobility rights,” the declaration reads.

“Where Covid rules appear to have violated the Charter, courts have deferred to the state to take whatever measures it deems necessary, whether demonstrably justifiable or not.”

Signatory Lisa Bildy, a private litigation lawyer in London, Ont., said on Twitter that “there are still lawyers who will fight for individual rights and freedoms.”

“Canada used to be a free & democratic society, but many are appalled by a growing disregard for civil liberties and the rule of law,” she wrote.

Our fellow citizens need to know that there are still lawyers who will fight for individual rights and freedoms. Canadian lawyers and members of the public are invited to join us by signing this declaration. 2/2 @PardyBruce https://t.co/39hOtP9Vth

In their declaration, the lawyers identified several areas of concern, one being that in response to the pandemic, provincial legislatures “passed statutes that delegate broad discretionary powers to unelected public health officials,” who in turn created “draconian legal restrictions by fiat, without public scrutiny or open debate.”

The public health restrictions have enabled both private and public employers to suspend or dismiss workers who insist on their right as an individual to decide what medical treatment they receive, the declaration says.

“In our system of law, no principle is more important than the right to control your own body and to make your own medical and health decisions,” it says.

“An anxious populace, swept up in a deliberate campaign of fear, now believes that individual liberties upon which our liberal democracy is founded are dangerous and selfish. A growing collectivism that demands safety at the expense of autonomy shapes public policy.”

The introduction of proof-of-vaccination mandates, or vaccine passports, resulted in the abandonment of the right to privacy and people’s control of their personal medical information, as Canadians are forced to disclose their vaccination status to be able to work, travel, access public and private services, attend university, and sometimes even to receive medical treatment, the declaration says.

“Those who cannot or will not disclose face aggressive social disapprobation,” the lawyers write.

“Vaccine passports create the infrastructure for a global digital surveillance system. Institutions that last year were prohibited from collecting individual medical history now demand it as a condition of employment or admission.”

Regarding the legal system, the lawyers say courts have “embraced the pandemic narrative” and “appear to have taken a side on Covid.”

“Courts are supposed to be neutral,” the declaration says. “Access to justice and the rule of law are now at risk. Unvaccinated persons are banned from juries, throwing into question the ability of all to obtain a fair trial heard by a jury of their peers.”

Noting that they “fear the erosion of our free society” and “question the single-minded fixation on a virus that poses little risk to most people,” the lawyers are calling for an immediate end to vaccine passports and mandates, while also proposing that a public inquiry be held to look into how the pandemic has been handled.

“Canadians should have control of their own lives and have the right to make their own decisions about their health, medical treatments, personal information, travels, and associations,” they write.

“Canada is supposed to be a free country governed by the rule of law. Restore it now or risk losing it for good.”