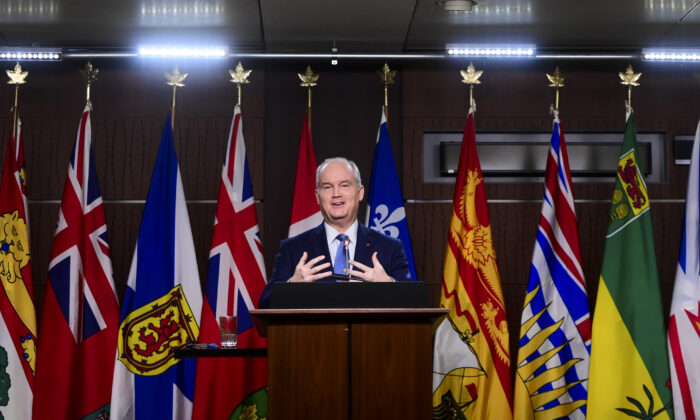 Conservative Leader Erin O’Toole is calling on the Liberal cabinet to “respect Parliament and officially recognize” as a genocide Bejing’s persecution of Uyghurs and other Turkic Muslims in China, after the cabinet abstained from voting on a motion seeking this declaration on Feb. 22.

“Today, Members from all parties voted to recognize the genocide currently being carried out by the People’s Republic of China against Uyghur and other Turkic Muslims, despite Justin Trudeau and his Cabinet refusing to vote. Their coordinated absence speaks volumes,” O’Toole said in a statement.

“It is shameful that Justin Trudeau and the Liberal government continue to refuse to call the horrific conduct by the Chinese Communist Party what it is: a genocide,” he added, referring to Canada’s prime minister. “Now, Conservatives are calling on the Liberal government to respect Parliament and officially recognize the genocide happening in China—as most of their members did when they voted in support of our motion.”

The motion, tabled by Conservative foreign affairs critic Michael Chong on Feb. 18, received unanimous support from the Bloc Quebecois, the NDP, the Green Party, and non-cabinet Liberal MPs in a 226-0 vote.

Most MPs also voted in favour of an amendment to the motion introduced by the Bloc Quebecois calling on the International Olympic Committee to move the 2022 Olympics out of China if the genocide continues when the motion is passed.

In a press conference on the same day, O’Toole said that other than the two actions stated in the motion that the Canadian government must take, the third step “would be to work with our allies and the appropriate diplomatic channels to apply pressure and call out the acts for what they are: genocide.”

“We have the obligation to work with our allies to apply pressure diplomatically,” he said. “With respect to China, the world can no longer turn a blind eye.”

Foreign Affairs Minister Marc Garneau was the only Liberal minister who showed up in the House of Commons on Feb. 22. He voted on behalf of the cabinet to abstain from voting on the motion.

“We remain deeply disturbed by horrific reports of human rights violations in Xinjiang, including the use of arbitrary detention, political re-education, forced labour, torture and forced sterilization,” Garneau said in a statement that day.

“The free vote in Parliament ensures each member can make a determination based on available evidence. Taken together, these views will form Parliament’s view. We welcome parliamentarians working together and debating this critical issue.”

Garneau said that the federal government takes “any allegations of genocide extremely seriously” and will work with the international community to ensure the allegations are investigated.

“We once again repeat our call for transparency and a credible international investigation in response to allegations of genocide. This investigation must be conducted by an international and independent body so that impartial experts can observe and report on the situation first-hand.”

Prime Minister Justin Trudeau said at a press conference on Feb. 19 that “we need to move forward not just as a country but as a world on recognizing the human rights violations that are going on in China.”

Trudeau added that he had spoken to G7 leaders earlier that day about the need to be “coordinated in our way forward” regarding the Chinese regime’s human rights violations.

O’Toole, in his statement, added that “Canada may be a smaller country in terms of population, but we are a towering giant when it comes to our commitment to human rights.”

He called on the Liberal government to “stop their naive approach” to the Chinese Communist Party and stand up for what is right.

Chong told CTV on Feb. 21 that the Conservative Party is ready to support economic sanctions against China.

“Everything needs to be on the table—trade, Magnitsky sanctions, economic sanctions,” he said.