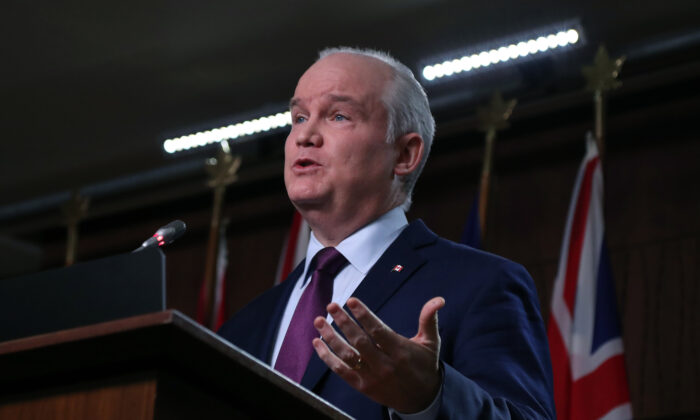 Conservative Leader Erin O’Toole is calling on Ottawa to push for the relocation of the 2022 Winter Olympics outside of China due to Beijing’s “genocide against Uyghur Muslims” and “police state in Hong Kong,” violating both human rights and principles of Olympism.

In a press conference on Tuesday, O’Toole said the time has come for Canada to take a stand for human rights and dignity and call on the International Olympic Committee (IOC) to relocate the 2022 Winter Olympics out of China.

“The first principle of the Olympic Charter states that the Olympic movement is intended to ‘create a way of life based on the joy of effort, the educational value of good example, social responsibility and respect for universal fundamental ethical principles,’” said O’Toole, but “genocide is taking place in China right now.”

“Approximately one million Uyghurs have been forcibly relocated into detention centres for re-education in [Xinjiang]. People who have managed to escape have reported horrific coordinated violence using violence, using physical, mental, and sexual torture,” O’Toole said.

“Women have spoken of mass rape and sexual abuse. Women have been subjected to forced sterilization.”

The Chinese Communist Party (CCP) has also established a police state in Hong Kong, kidnapped two Canadians—Michael Kovrig and Michael Spavor—and held them hostage without cause or due process for two years, the Conservative leader added.

O’Toole stressed that Canada should not be sending her athletes to China at this time.

“I think Canadians would agree that it would violate fundamental ethical principles to participate in an Olympic Games hosted by a country that is committing a genocide against part of its own population,” he said.

The Opposition leader said Canada must take a stand and show leadership, and urged the Prime Minister Justin Trudeau to “actively seek the relocation of the 2022 Olympic Games.”

“But we do not need to do this alone. We should work with our closest allies and coordinate an effort to relocate the Games for 2022,” he continued.

U.S. Rep. Michael Waltz (R-Fla.) introduced a resolution Monday, calling on the United States to boycott the 2022 Winter Olympics if it’s not moved out of China.

The CCP has “carried out a number of heinous acts in the last year alone that should disqualify them from hosting the 2022 Winter Olympics,” Waltz said in a statement. He pointed to the regime’s atrocities against Uyghurs in Xinjiang, which the United States has designated a genocide, its crackdown in Hong Kong, and its coverup of the CCP virus outbreak that enabled its global spread. Given these factors, it would be “immoral, unethical, and wrong” for China to host the Olympics, the resolution stated.

“Rewarding the bad behavior of autocrats only emboldens them. There isn’t a worse time to reward [Chinese Leader] Xi for his utter recklessness and inhumanity,” Waltz wrote in an op-ed in the The Washington Examiner.

UK’s Ed Davey, leader of the Liberal Democrats, issued a statement on Feb. 9 that the “whole world must now stand up to Beijing and use every available tool to stop it.”

“No doubt we will hear teams, sponsors and governing bodies say the Olympics and Paralympics should be separate from politics and they are just concentrating on sport. But in the face of genocide, that just isn’t good enough,” Davey said. “Our brightest and best athletes should not be forced to be part of a propaganda exercise for the Chinese Communist Party whilst it tries to wipe the Uyghur people off the face of the planet.”

The CCP has denied any atrocities committed in Xinjiang province, saying it is running a voluntary employment and language-training program.

Trudeau, meanwhile, has said that genocide is an “extremely loaded” term that should be applied cautiously and in strict accordance with internationally recognized criteria.

“There is no question there have been tremendous human rights abuses coming out of Xinjiang,” he said during a press conference on Tuesday. Use of the word must be “properly justified and demonstrated so as not to weaken the application of ‘genocide’ in situations in the past.”

The IOC, in a previous statement to The Epoch Times, said that in choosing Beijing to host the Olympics, its evaluation commission had “considered the views of independent NGOs with respect to  a number of  issues, including human rights” and raised the concerns with government authorities.

“We received assurances that the principles of the Olympic Charter will be respected in the context of the Games,” it added, and said it would continue to discuss “Games-related issues” with the organizers.

A coalition of 180 rights groups representing Tibetans, Uyghurs, Inner Mongolians, residents of Hong Kong, and others, issued an open letter to governments around the world on Feb. 3, calling for a boycott of the Beijing Winter Olympic Games next year.

“The IOC refused to listen in 2008, defending its decision with claims that they would prove to be a catalyst for improved human rights,” the letter says. “As human rights experts predicted, this decision proved to be hugely misplaced; not only did China’s human rights record not improve but violations increased substantially without rebuke.”

Cathy He, The Canadian Press, and The Associated Press contributed to this report.