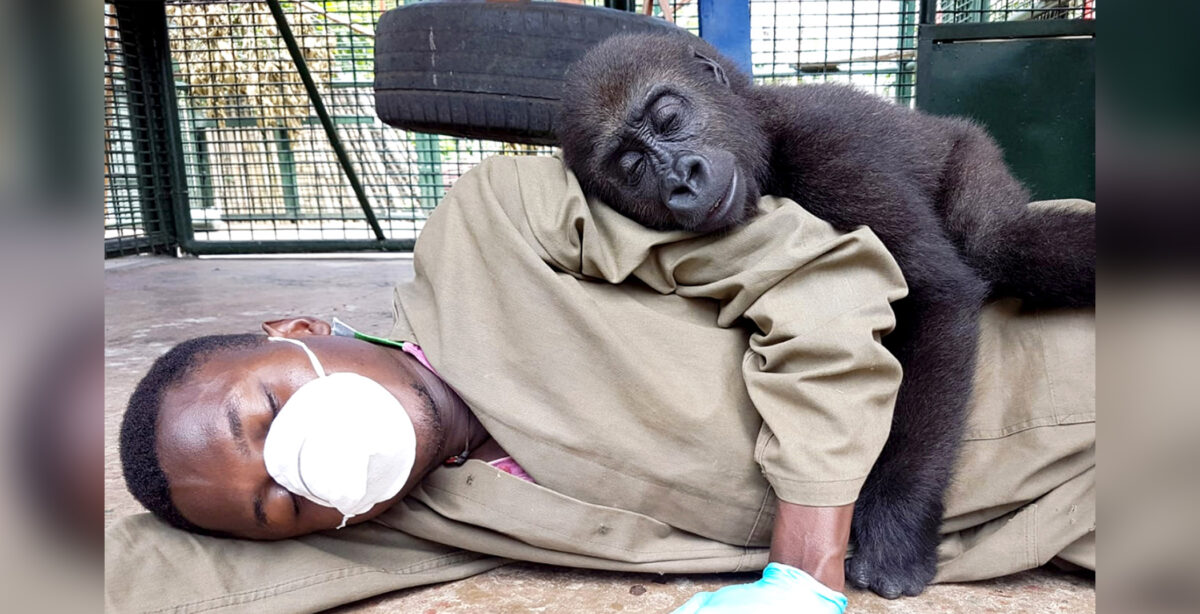 Orphaned Baby Gorilla Bonds With Human Carer After Being Rescued, and the Photos Are Adorable

An orphaned baby gorilla developed a deep connection with his human carer after being taken into the protection of a wildlife center in Cameroon, Africa. The organization deals with the consequences of illegal poaching in the country, yet their interaction made for some priceless photography.

Bobga was a baby when he arrived at the Limbe Wildlife Centre (LWC) in the central African nation. As he was still so young, he had to be closely looked after by the center’s nursery staff. The organization’s fundraising coordinator Laura Craddock took the adorable pictures of the baby ape cuddling his carer Alvin Muma.

Despite a rough start at life, the adorable gorilla seemed to be making significant progress, and the photos reveal a deep bond between him and his rescuer. “It is important for an orphan gorilla, like Bobga, to feel safe and secure with his caretaker and here these pictures capture tender moments of rest between Bobga and one of his dedicated caretakers, Alvin,” Craddock told Caters.

The delightful images reveal the little gorilla hugging and napping on top of his carer in the absence of his own gorilla mother.

As for Bobga’s rehabilitation, Craddock shared some details about his new environment and how he’s acting like any baby gorilla should during that process.

“Bobga has a large, safe enclosure in which he stays and sleeps when he is not outside playing in the nursery,” she explained. “Foraging, playing, learning social skills, stimulating curiosity, climbing and grooming all are crucial elements of his rehabilitation.”

On the LWC website, they explain that most orphaned animals that arrive in their care had their mothers hunted down for bushmeat—while others were kept as pets, in unsuitable conditions.

Craddock explained the essential service their organization is providing for animals like Bobga. “We provide a second chance to victims of the illegal wildlife trades, educate the local community on environmental protection and provide alternative employment to ex-hunting communities,” she said.

The LWC is focused on the rescue and rehabilitation of wildlife affected by illegal hunting and poaching. They offer veterinary care, food, and housing, along with a program for reintroducing animals to their natural habitat. For gorillas and other primates, like little Bobga, the process is a bit more complicated.

According to the center’s website, the country lacks a “safe, protected, natural habitat for release”; therefore, “reintroducing rehabilitated primates to the wild is often not an option.” That’s especially the case with orphaned gorillas, which are extremely vulnerable to poachers.

However, the center ensures that primates are rehabilitated and introduced into family-type groups. The LWC states they also work with “Cameroon’s key wildlife agencies and communities to work towards the future aim of developing semi-free enclosures within two national parks.” In the meantime, though, the center maintains a safe environment for all primates in their care, including little Bobga.