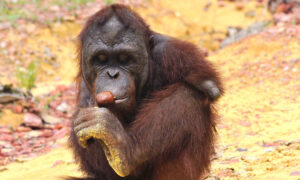 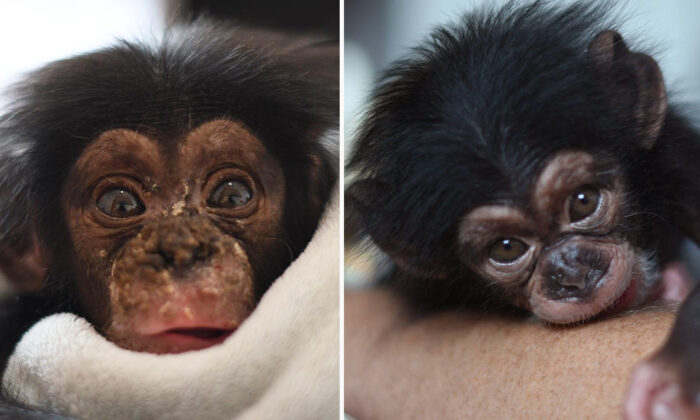 An injured baby chimpanzee has been given a second chance at life after being orphaned by the poachers that killed her mother. It is believed that the infant was destined for illegal pet trade and her mother was likely killed for bushmeat.

A ranger at Sapo National Park in the Liberian rainforest of West Africa rushed to investigate after hearing shots fired. It was too late to help the mother, but the infant chimpanzee, which sustained injuries on her face and head due to falling from a tree, was rescued.

According to a Facebook post, Jenny Desmond, who founded Liberia Chimpanzee Rescue and Protection (LCRP) with her husband, wildlife veterinarian Jimmy, near the country’s capital of Monrovia, was contacted. However, owing to the flooded dirt roads, the two-day journey by road from Monrovia to Greenville seemed impossible. Thus Mission Aviation Fellowship (MAF) Liberia was contacted to help rescue the orphaned chimp by air.

Arriving at the LCRP, the baby was treated for her injuries and safely housed alongside the rescue’s 63 resident chimps.

“Mary was just one week old when I got to her, so she will not have had much of her mom’s milk,” Jenny told Mirror. “She also had lots of cuts and scrapes but is recovering well.”

Her rescuers “kept her hydrated, fed, warm, and loved,” before she reached the safety of the sanctuary, according to an LCRP post on Facebook. After arriving, Mary was syringe-fed before transitioning to a bottle.

Jenny explained that new admissions are “always scary” because the chimps are so traumatized. Mary, as their youngest intake, suffered serious separation anxiety.

“She is definitely aware of what she has been through as she is having nightmares,” Jenny explained to Mirror. “Also any time Mary feels I am leaving her, she becomes panicked.”

Liberian authorities launched an investigation into the poaching of Mary’s mother. Her death exemplifies a bushmeat trade that has decimated the West African chimpanzee population; the species is listed as “critically endangered” on the IUCN Red List.

“If we allow this trade to continue, in the near future this majestic species could be wiped out,” Jenny lamented. She and Jimmy, who hail from Colorado in the United States, are planning to establish a 100-acre forest habitat for their rescued chimpanzees in 2021.

On Nov. 17,  2020, LCRP posted an update on Mary’s progress on Facebook. “[G]etting stronger and so much more interactive as she gets more and more comfortable with and trusting of us,” they wrote.

While Mary had developed a cold, the team was administering fluids and vitamins and monitoring her breathing closely. “Chimpanzees are not and should not be pets or forced to live with humans,” LCRP reiterated. “Please support LCRP’s efforts to rescue chimpanzees in need to keep wild chimps wild.”

As of Jan. 4, 2021, Mary, who has been with LCRP for two months, is thriving and growing up fast under the care of LCRP’s wildlife experts. “Smile!” staffers posted, beside a photo montage of Mary playing happily with her rescuers.

The English edition of The Epoch Times was solely granted permission by Liberia Chimpanzee Rescue to feature photos of the chimpanzee, Mary Beauty.