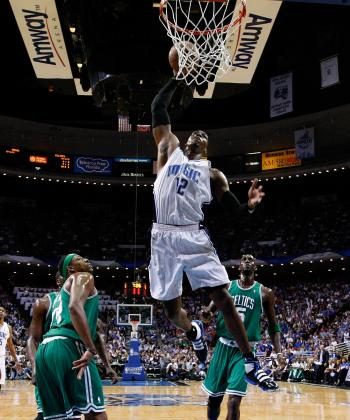 By Susan Shan
Print
Magic Johnson summed it up best after Game 5 between the Boston Celtics and Orlando Magic when he said, “Momentum is the key in any sport. Right now, all the momentum has swung to the Orlando Magic.”

The Magic, who were down 3–0 in the series to the Boston Celtics, are now down only 3–2 after a 113–92 inspiring victory at home on Wednesday.

Orlando coach Stan Van Gundy disagrees with Johnson. “I don’t know if you can say you have momentum when you’re down 3–2 going into their place,” he said. “I still look at it like we’re climbing a huge mountain right here, but we are playing better.”

A big reason for the improved play is winning the battle of the boards. Rebounding is a telling statistic on effort, and Orlando outrebounded Boston 43–26. “We were great on the boards,” Van Gundy said. “The biggest thing tonight is that we dominated the glass.”

However, the lackluster effort by the Celtics was not completely their fault. The referees made it a point to call five technical fouls in the game, including two on Boston center Kendrick Perkins, which forced Perkins to leave the game late in the second quarter.

As if Boston didn’t have enough to deal with, reserve forward Glen “Big Baby” Davis received an inadvertent elbow to the face from Magic center Dwight Howard. Davis fell to the ground and stumbled around before referee Joey Crawford caught him. Both Davis and teammate Marquis Daniels have concussions and could sit out Game 6.

“It just got away from us with all the fouls and the technicals and the injuries. I thought we got a little sidetracked,” Celtics coach Doc Rivers said.

The team got so sidetracked, in fact, that their leading scorer was Rasheed Wallace off the bench with 21 points. Stars Kevin Garnett and Ray Allen only scored 10 and 9 points, respectively.

On the contrary, Orlando point guard Jameer Nelson followed up his strong 23-point Game 4 performance with a 24-point, 5-rebound, 5-assist effort to lead all scorers. Howard once again dominated with 21 points, 10 rebounds, and 5 blocks.

The Magic victory instills fear in an already anxious Boston fan base. After seeing their NHL Boston Bruins give up a 3–0 series lead and 3–0 Game 7 lead only to lose the game and the series 4–3, the fans must now worry about a once 3–0 NBA series lead turning into a possible 3–3 tie if the Celtics don’t win on Friday.

“We got a job to take care of and our goal is to win one more game in this series regardless of who we put out there,” Paul Pierce said.

Allen added, “We’ve been here before. It’s nothing that worries me.”

Orlando is only two games away from making history as the first NBA team in 94 attempts to come back from a 3–0 series deficit to win 4–3.

“We all believe. We know we can do it,” Nelson said. “We believe they have the pressure on them right now.”

Only three NBA teams have ever forced a Game 7 after falling behind 3–0. Orlando will certainly need some magic at TD Garden on Friday night to become team number four.