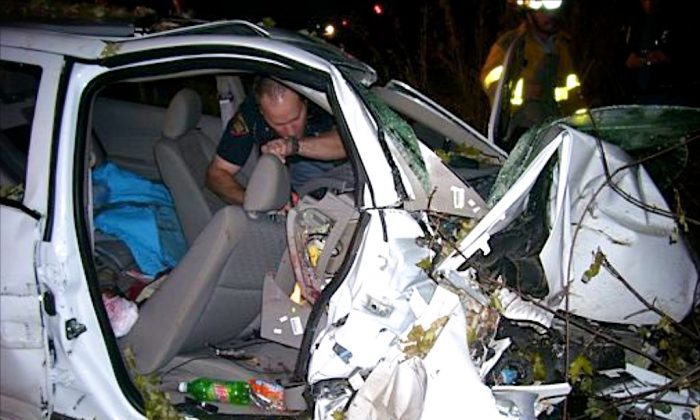 In this Oct. 24, 2006, photo provided by the St. Croix County Sheriff's Office, police investigate the wreckage of a 2005 Chevrolet Cobalt that crashed in St. Croix County, killing Natasha Weigel, 18, and Amy Lynn Rademaker, 15, and injuring the 17-year-old driver, Megan Ungar-Kerns. The vehicle's ignition was found in the accessory position and the air bags didn't deploy. General Motors' recent recall of 2.6 million small cars, including the 2005 Cobalt, has shed light on an unsettling fact: Air bags might not always deploy when drivers - and federal regulators - expect them to. (AP Photo/St. Croix County Sheriff's Office)
Autos

Organization Charts Are Boring—but This One Could Save Your Life

To understand how General Motors allowed a problem with a small part to balloon into a crisis, look at the company’s organization chart.

As of early last year, the director of vehicle safety was four rungs down the ladder from the CEO, according to a copy of the chart obtained by The Associated Press. Finance, sales and public relations had a direct path to the top.

That structure — as well as what new CEO Mary Barra has called a culture that valued cost savings over safety — is likely to be a prime target in a report expected this week from former U.S. Attorney Anton Valukas. He was hired by GM to investigate why the company took more than a decade to recall millions of cars with a defective ignition switch that has now been linked to at least 13 deaths.

Ford and Chrysler, GM’s main Detroit competitors, have safety directors higher on their charts than GM does.

Management experts interviewed by the AP say safety ranks higher at other companies as well, especially food, drug and chemical makers. At some, the safety chief has direct access to the CEO.

It’s unclear if the report will discuss the role of top managers in the crisis. Up to now, no evidence has emerged to suggest that top GM executives knew about the switch problem before late last year.

Internal investigations typically blame the bureaucracy, not the bureaucrats, says Erik Gordon, a business and law professor at the University of Michigan.

“Generally they come up with something that looks good enough to the outside world without damaging top management,” Gordon says.

Valukas is expected to recommend streamlining the bureaucracy so employees can more easily report problems to top officials. Barra has already taken steps in that direction. Among them:

Harrigan suggests that GM’s board form a safety committee to review issues, as is the practice at some food and chemical companies. She says that chemical maker DuPont, for example, is so well-regarded for its safety culture that other businesses turn to it for guidance.

General Motors-CEO Barra Had ‘Bungling System’ Under Her

At Chrysler, the safety chief reports to the head of engineering, who reports to the CEO. Ford’s safety director reports to a vice president who reports to Mark Fields, chief operating officer and soon-to-be CEO. Still, Ford was fined more than $17 million last year by safety regulators for not acting quickly enough to recall Escape SUVs with sticking accelerators.

At GM, safety was under Barra for nearly three years in her old job as head of product development, although the head of safety didn’t report directly to her. Barra has said she didn’t know details of the switch problem until Jan. 31 of this year. Harrigan says that’s possible because of the way GM was structured.

But Gordon, the University of Michigan professor, says that Barra shouldn’t feel vindicated if the report places the blame on the company’s structure.

“This bureaucratic bungling system that let this happen was under her,” he says.

GM documents released by Congress show that its engineering staff knew as early as 2001 of a problem with the ignition switch: It can be jostled out of the “run” position while a car is moving. The problem bounced around lower levels of the company, even after engineers and lawyers learned of fatal crashes involving cars with the switch. One set of solutions was rejected as too costly and time-consuming. Two company investigations last decade were closed without a recall.

According to the documents, the highest the problem reached in the company before last year was James Federico, executive director of vehicle performance, safety and test labs. Federico, who retired from GM and took a job with Harley Davidson in May, was one rung above the vehicle safety director, Gay Kent, and two rungs down from Barra when she was head of product development.

“These were problems in the ability of the organization to react quickly to the information … to share the information outside of stovepipes,” Friedman said. GM agreed to pay the agency’s maximum fine — $35 million — and submit to strict government oversight.

Congress and the Justice Department are still investigating GM, with criminal charges possible.